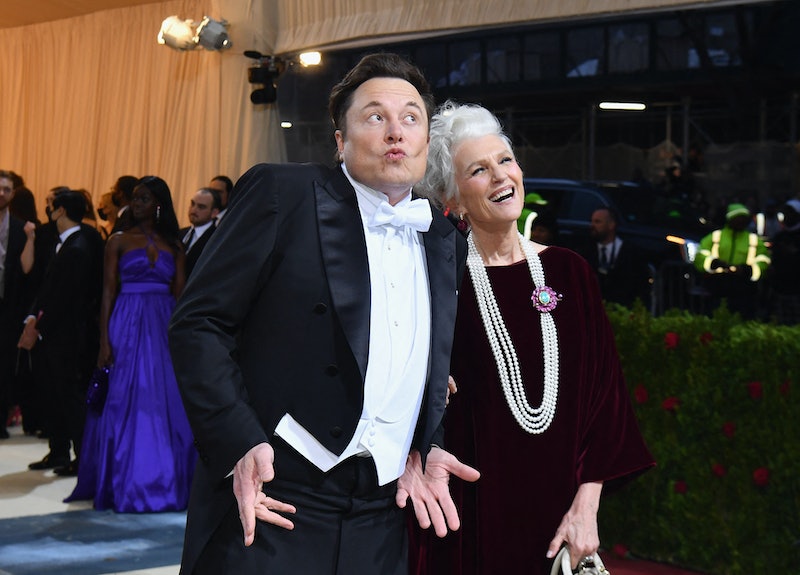 You might think Elon Musk would want to lay low after buying Twitter for $44 billion in one of the most controversial business purchases ever. Instead, he showed up to the 2022 Met Gala, and he had some backup with him. The billionaire Tesla founder brought his mother, supermodel Maye Musk, to fashion’s biggest night on May 2. “My mom wanted to come, so I brought my mom!” he told Entertainment Tonight. “That is the whole reason.”

Elon hammed it up on the red carpet, making funny faces at the cameras and mingling with stars like Billie Eilish and Kris Jenner, who adjusted his bow tie during an interaction. While on the red carpet, Elon defended his acquisition of Twitter to ET, saying he does “do a lot of things philanthropically” and wants to incorporate Twitter into that mission. “Really, my companies are intended to do good for the future of humanity,” he said. “So, aspirationally, I am trying to do good for humanity and the future of civilization.”

As for Maye’s reaction to his efforts, she made it clear that her son doesn’t listen to her advice — other than taking her to the Met Gala. “I told him not to take on the world and the universe and he didn’t listen,” she quipped to ET. “He doesn't listen to his mom.”

While some Twitter users found their Met outing very wholesome, others questioned why he was even there in the first place (and why he was making those funny faces).

One TikTok user caught a interaction between Elon Musk and Kris Jenner, who arrived just after the Musks and went to fix his bow tie before walking the red carpet.

Tweets About Elon Musk & His Mom