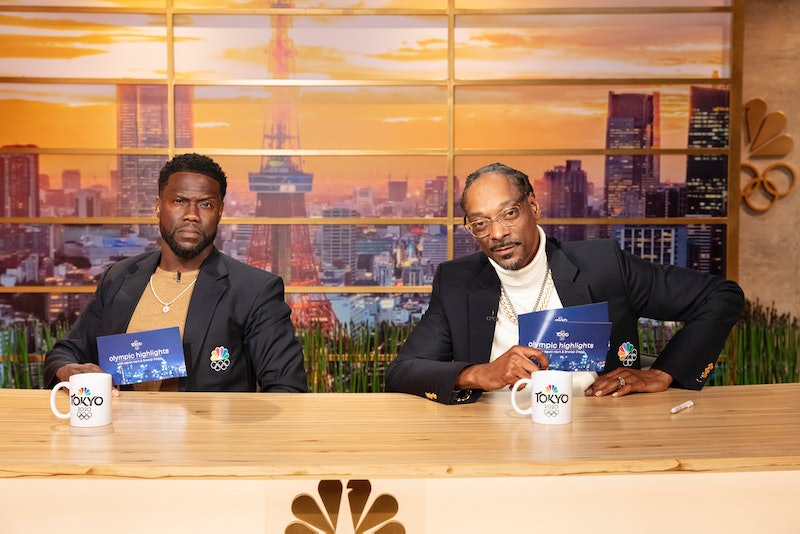 Someone at Peacock deserves a gold medal or at least a raise, because the idea of making Kevin Hart and Snoop Dogg’s Olympic commentators is getting rave reviews on social media. The two added a new segment called “Cold Call” to the July 30 episode of their show, Olympic Highlights, in which they hilariously added commentary to footage from the delayed 2020 Tokyo Games. Since its debut, fans on Twitter have been living for it.

Before the first (and hopefully not last) “Cold Call,” Hart explained what it was all about. “The producers have pulled some clips from the Olympics and we don’t know what sport it is or what event it has to do with,” the comedian said. “Well, watch it and we’ll call it like we see it.”

The two proceeded to do just that, and they had a lot to say — especially when it came to the dressage competition. “Horses. I like this. This is equestrian,” Snoop started. Then, he got even more excited about it, telling Hart, “Oh, the horse Crip walking, cuh! You see that? Oh, that’s sick.” After watching more, he was ready to “get this mother*cker in a video,” much to Hart and the internet’s delight.

Perhaps not surprisingly, a lot of the tweets about the “Cold Call” segment centered on the Crip-walking horse. “Snoop said the Horse was Crip Walking and I can’t unsee it,” one person tweeted. Another wrote about a scare they had right after watching it and noted that they’d have been “content” if the video was the last thing they ever saw.

For many fans, adding Hart and Snoop’s commentary took something great and made it even better. “The Olympics are awesome, and even more awesome when @KevinHart4real and @SnoopDogg explain it,” a viewer tweeted. Someone else called for the two to get a 24-hour newscast.

For many, there just wasn’t enough of their commentary. The general consensus seemed to be that the only flaw with “Cold Call” was that there wasn’t enough of it. “I could watch Kevin hart and Snoop commentate all damn day,” one person wrote.

Other people made a point of letting others know they should also watch it and share in the joy.

One viewer was even ready to end friendships over any possible criticism of the commentary. “If you’re not entertained by @SnoopDogg and @KevinHart4real commentating on the Olympics, I suppose our tastes in comedy is vastly different and therefore we cannot be friends (jk…maybe),” they wrote.

And at least one fan was ready to subscribe to Peacock solely because of Hart and Snoop, so the team behind the show must be high-fiving.

With the Olympics going until Sunday, Aug. 8, there’s more to come from Hart and Snoop’s highlights show. Hopefully, that includes “Cold Call” again, because if there’s one thing Twitter has taught us, it’s that fans definitely want more. In the meantime, episodes are streaming on Peacock.

More like this
Twitter Is In Awe Of Taylor Swift’s “Lavender Haze” Music Video
By Jake Viswanath
Twitter Is Roasting Liam Hemsworth Thanks To Miley Cyrus' New Song “Flowers”
By Jake Viswanath
New Details About Jeremy Renner's Snowplow Accident Reveal The Actor's Intentions
By Sam Ramsden
Michael B. Jordan Tackled His "Public Breakup" With Lori Harvey On 'SNL'
By Brad Witter
Get Even More From Bustle — Sign Up For The Newsletter
From hair trends to relationship advice, our daily newsletter has everything you need to sound like a person who’s on TikTok, even if you aren’t.