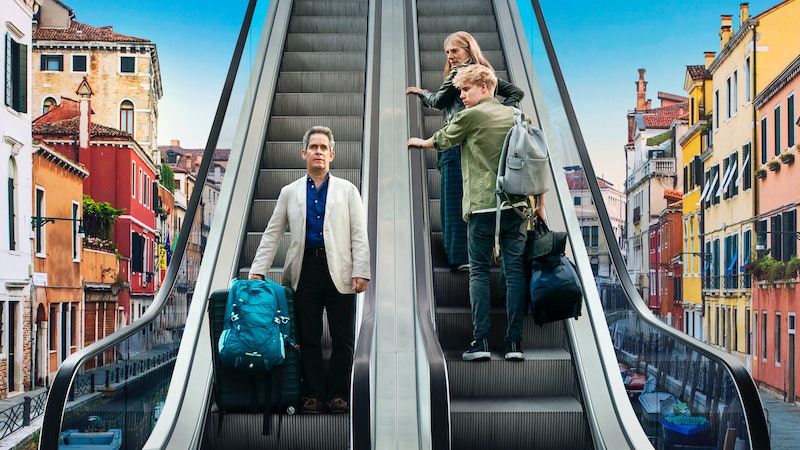 The BBC's newest comedy-drama Us centres around the seemingly happy, but dysfunctional Petersen clan, who set out on a grand tour of Europe despite strained relationships in the family trio. The series is adapted from David Nicholls' best-selling novel of the same name, and if the on-screen reimagining stays close to the pages of the original story, the Us book ending is sure to leave fans divided.

As the Independent reports, Nicholls' 2014 novel follows the story of married couple Douglas and Connie Petersen, who, along with their teenage son Albie, reluctantly embark on a family adventure across Europe, stopping by in the likes of Paris, Amsterdam, Munich, and Venice along the way. Not everything is quite so rosy, however, as right before the family vacation, frustrated artist Connie expresses her desire to end their 25 year-long marriage — a bombshell which inspires Douglas to use the trip as an opportunity to win back his wife's love. In a review for the Guardian, the story is described as a "funny but curiously buttoned-up" follow up to the author's hit 2009 release One Day. But how does Us end?

Potential spoilers lie ahead. If you'd prefer to witness the drama unfold on-screen, look away now.

Well, as noted in the Tea in the Treetops book review blog, those hoping for a happy ending might be in for a major disappointment, because upon the novel's conclusion, it is revealed that Douglas' attempts at saving his marriage have failed, leaving him single and alone.

As previously mentioned, the story has recently been adapted for the small-screen by the BBC in which The Night Manager's Tom Hollander takes on the leading role of Douglas. As the Radio Times reports, Luther star Saskia Reeves appears in the comedy-drama as wife Connie, whilst Doctor Foster’s Tom Taylor stars as the pair's teenage son Albie. Other members of the show's cast include Curfew’s Thaddea Graham as Kat, Father Brown's Gina Bramhill, Agents of SHIELD star Iain DeCaestecker, and The Killing’s Sofie Gråbøl.

Commenting on the new series, which is described by the BBC as a "poignant and often hilarious story," executive producers Greg Brenman and Roanna Benn credited the show's "exceptional cast" and Nicholls' "glorious" adaptation.

“David Nicholls is a unique and rare talent who miraculously manages to intertwine profound emotion with full-on humour. This glorious adaptation has attracted an exceptional cast in Tom Hollander, Saskia Reeves and Sofie Gråbøl," the pair said in a statement.