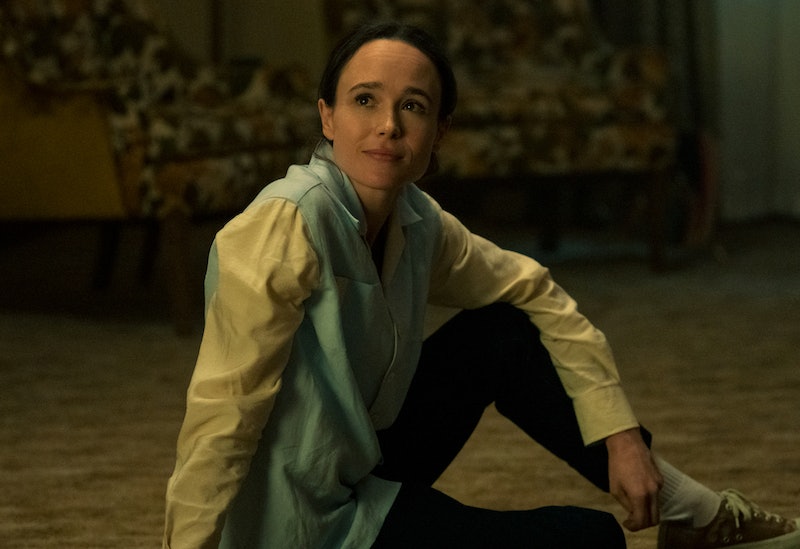 Spoilers ahead for The Umbrella Academy Season 2. In the second season of The Umbrella Academy, Vanya Hargreeves is a much different version of herself. In Season 1, she was lonely and embittered, spiraling from the family outcast into the White Violin due to long-repressed trauma. But in Season 2, “there’s a lightness to her,” says actor Ellen Page. It's because for the first time in her life, she feels genuinely loved.

Season 2 picks up just after the Season 1 cliffhanger, during which Vanya's siblings failed to stop her from inadvertently causing the apocalypse. In a final attempt to undo those events, the siblings time travel to 1960s Texas — except they all end up separated. Vanya crash-lands in an alleyway and stumbles confused into the street, where she's immediately hit by a car, causing her to forget who she is and all of the trauma she's endured. The woman driving, a young mother named Sissy (Marin Ireland), then takes Vanya in, and the two slowly begin an affair.

“[Vanya is] happy," Page says, noting that the relationship is in direct contrast to the “incredibly abusive and manipulative relationships” Vanya had with Leonard Peabody (John Magaro) and her adoptive father, the late Sir Reginald Hargreeves (Colm Feore). "I think falling in love for the first time and falling in love with Sissy is a huge turning point for her — for her growth and as a person."

Eventually, Vanya's siblings track her down and she rediscovers her powers, but she still struggles to control them. In one of the more climactic scenes, Vanya unwittingly transfers her powers to Sissy’s son, Harlan (Justin Paul Kelly), after she saves him from a life-threatening situation. The two already shared a sense of inherent understanding — as an autistic boy who struggles to verbally communicate, Harlan is isolated from those around him similar to the way that Vanya was — but this forges an even deeper bond.

“[Vanya is] embraced by Sissy and Harlan in many ways. She finds a sense of home [with them]," Page says. "And then, of course, there's the more obvious thing that happens when she saves him and isn't even aware that's going to happen. I think the connection [between them is] very deep, in terms of feeling not seen [and being] dismissed as a child."

For Page, Vanya’s newfound sense of home this season was a refreshing change of pace. “She's been in a lot of pain for most of her life, so it was nice to do this season where she was happier," Page says. "She fell in love and gained internal strength. I'm hoping that continues and she's able to exist in the world in a way that feels true to her.”

More like this
Netflix Reveals First Look At Wednesday In The 'Addams Family' Spinoff Series
By Bustle Editors
Who Plays Trent In 'Never Have I Ever'? Benjamin Norris Calls His Character A “Himbo Stoner”
By Grace Wehniainen and Radhika Menon
Everything To Know About Netflix’s 'Never Have I Ever' Season 4
By Jack Irvin and Gabrielle Bondi
‘Squid Game’ Creator Hwang Dong-Hyuk Just Dropped A Major Season 2 Tease
By Brian Anthony Hernandez and Bustle Editors
Get Even More From Bustle — Sign Up For The Newsletter