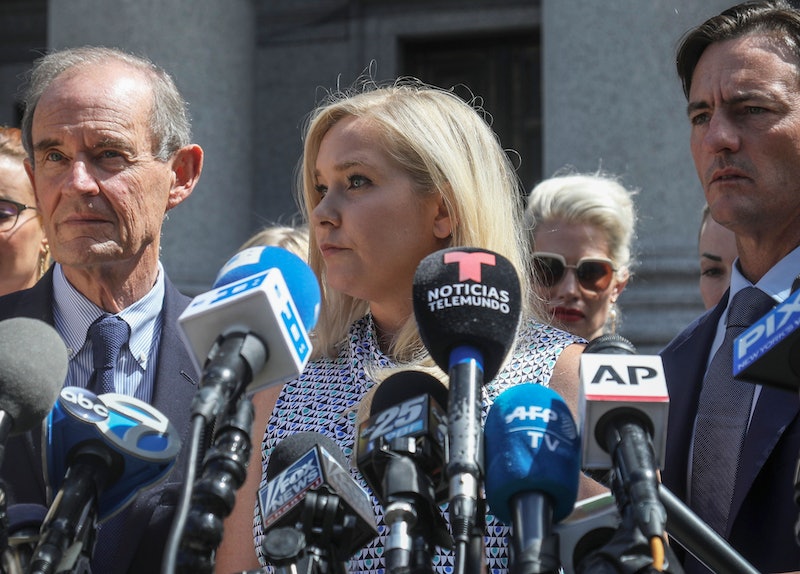 Virginia Roberts Giuffre has filed a lawsuit against Prince Andrew under allegations of sexual abuse.

Filed in Manhattan under New York’s Child Victims Act, Giuffre alleges that she was trafficked by convicted sex offender Jeffrey Epstein on three occasions to have sex with Prince Andrew when she was under 18.

As the legal documents note, per BBC News, “In this country no person, whether president or prince, is above the law, and no person, no matter how powerless or vulnerable, can be deprived of the law’s protection.”

According to the Guardian, Prince Andrew and Epstein first met in 1999. The first time Andrew was formally linked to Epstein’s crimes was in a 2015 civil case in Florida brought forward by Giuffre, who remained anonymous at the time. Giuffre named Andrew in the suit and claimed that Epstein forced her to have “sexual relations” with the royal.

In a statement following today’s lawsuit, Giuffre said, “I am holding Prince Andrew accountable for what he did to me. The powerful and the rich are not exempt from being held responsible for their actions. I hope that other victims will see that it is possible not to live in silence and fear, but one can reclaim her life by speaking out and demanding justice.”

Giuffre went on to explain that she “did not come to this decision lightly” and that she expects to receive “further attacks by Prince Andrew and his surrogates.”

“But I knew that if I did not pursue this action, I would be letting [her family] and victims everywhere down,” she added.

Giuffre is seeking unspecified “compensatory and punitive damages” from the prince in the lawsuit.

The lawsuit has been filed just in time before the Child Victim’s Act expires in New York State. According to ABC News, this act allows “people alleging they were sexually abused as children to sue despite the potential block that might be imposed by statutes of limitations.”

Despite telling Emily Maitlis in his 2019 BBC Newsnight interview that he would “help any appropriate law enforcement agency with their investigations,” Prince Andrew has been accused of providing “zero cooperation” in the Epstein case by lead prosecutor Geoffrey Berman.

According to Giuffre’s lawyer David Boies, the royal has been uncooperative in their case also. Boies said his team have been “trying to have a dialog with Prince Andrew” since he was named in the 2015 civil case. “We have given him every opportunity to provide any explanation or context that he might have,” Boise explained, concluding that “Andrew and his lawyers have been totally non-responsive.”

A letter was sent to his presumed legal team in July, according to the court filing, which “warned a lawsuit would soon be filed unless the prince agreed to enter into discussions for an alternative resolution,” ABC writes.

Prince Andrew has always vehemently denied the accusations made against him, telling Emily Maitlis in 2019 that he has “no recollection of ever meeting” Giuffre, despite there being a now-widely-publicised photograph of the two taken at the London home of Epstein’s former girlfriend Ghislaine Maxwell.

Prince Andrew’s representatives are yet to comment on today’s announcement.

More like this
King Charles Ensured These Subtle Tributes Were Included In Queen Elizabeth’s Funeral Wreath
By Sophie McEvoy
Camilla Paid Tribute To The Queen In A Heartfelt Video Message
By El Hunt and Sam Ramsden
Will Archie & Lilibet Attend The Queen's Funeral?
By Sam Ramsden
How To Follow The New Royal Family Social Media Accounts
By Sam Ramsden
Get The Very Best Of Bustle/UK