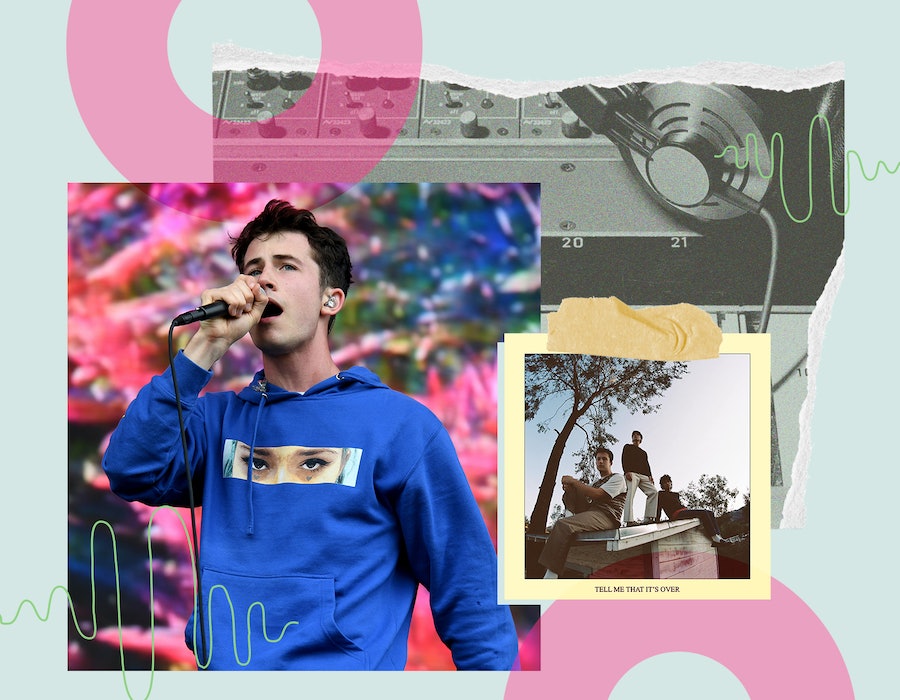 After a decade as bandmates, Dylan Minnette, Braeden Lemasters, and Cole Preston joke they have a surefire way of resolving their disagreements. “We normally fight it out, like physically, with some beatdowns,” Minnette tells Bustle before bursting out laughing. While the indie pop trio, now known as Wallows, is having their breakout moment this year — performing at Coachella, Bonnaroo, and Lollapalooza as well touring the world — the trio has been preparing for this career peak for as long as they can remember.

Minnette, 25, first met Lemasters, 26, in their hometown of Los Angeles when they were 10 years old and bonded over their love for vintage music. Years later, the duo got paired with Preston, 25, at a music program. “Cole was sitting behind the drum kit and we were like, ‘Whoa,’” Lemasters recalls. “I remember it just felt amazing. It was just a connection there.” After a few more years and some abandoned band names, the trio became Wallows, playing enough shows to land a record deal in 2018, almost a year after Netflix’s 13 Reasons Why, starring Minnette, debuted.

Though the trio’s debut album Nothing Happens put them on the map three years ago, it was the band’s collaboration with Clairo, “Are You Bored Yet?”, that made them go viral in 2020 after the song became a trending sound on TikTok. Two years later, Wallows is showing no signs of a sophomore slump. Their second studio album, Tell Me That It’s Over, seamlessly jumps from ’70s funk and ’80s disco anthems to early 2000s indie rock without feeling like pastiche — even if it was originally titled Rock & Roll Time Machine.

The album presents Wallows at their most versatile and self-assured, a feeling that resonates with Minnette. “What we’re doing in music gives me more confidence than what I’ve done in acting,” he says. “I think it’s just like self-identification in that way. I know who I am, and I’m letting the world know who I am, and it seems to be getting taken seriously.”

Below, the members of Wallows discuss the songs they want played at their weddings and funerals, their love of Frank Ocean, and their surprising favorite lyrics.

On Their Future Wedding Songs & Wanting A Lizzo “Flute” Moment

Preston: Maybe an old Linkin Park song... “In the End.”

Lemasters: “Mr. Brightside” was one of the last songs I karaoked.

Preston: Wow. OK. At my funeral, I would like them to play “Flesh and Blood” by Johnny Cash. At my hypothetical wedding, I want my wedding to be fun. I don’t want it to be emo, you know? I don’t want it to be serious. I just want my homies to gather and everybody’s drinking and having the best time. So we’re going to play Korn’s “Freak on a Leash.”

Minnette: I’m going to say “Get Low” by Lil Jon at both.

Is there an instrument that each of you wish that you played?

Lemasters: I wish I was a really good piano player.... Or it’d be cool to just be able to shred the violin. That’d be so sick.

Preston: The piccolo is the most beautiful instrument ever.

Minnette: I feel like the harp. If I was just an amazing harpist, that’d be so awesome.

Preston: It’d be game over. During the show, they wheel out the harp... people would go absolutely ape.

Minnette: We need a Lizzo flute moment, but just in a different way.

On Frank Ocean & The Impact Of Barnes & Noble

Minnette: I wouldn’t say I have a musical idol, to be honest. I have a lot of artists that I really just appreciate and respect so much. It’s been this way for years, but Frank Ocean is just to me this unstoppable force of just creativity and mystery and there’s quite literally no one that exists in the music scene like him in the way that he operates. He’s just on his own rules and everyone just accepts it and I think it’s awesome.

Minnette: Just the fact that he came back with a Blonded Radio episode out of nowhere that was just him on the phone with his doctor talking about microdosing and shrooms and psychedelics and that’s the only new music we got from his, this kind of house beat score that’s 35 minutes long. You know what? That’s awesome. If that’s the only thing I hear from him for a year, that’s dope. No one’s doing it like him.

What’s the first CD, tape, or vinyl — whatever medium it was — that you ever bought?

Lemasters: I think it was Funeral by Arcade Fire from Barnes & Noble. I was with Dylan at Barnes & Noble and it’s just the first thing I remember buying. I got Funeral and I listened to it on this old vinyl/CD player my dad had. I remember reading the booklet and all that stuff.

Minnette: For me, it was definitely [The Beatles’] Abbey Road CD. Also at Barnes & Noble, probably.

Preston: It was also at a Barnes & Noble, which like, wow. I love Barnes & Noble. I bought [The Strokes’] Is This It on CD and I thought I was so cool because the back cover of the CD in the jewel case, the back piece of paper was upside down and I was like, whoa, it’s so cool that it’s wrong. Misprint. I was like 11.

Did you guys just all go to Barnes & Noble when you grew up together? Was that the only store in your town?

Lemasters: That’s where we did band practice. I’m kidding, no. It’s just the classic, like there’s always Barnes & Noble around.

Minnette: It’s a very comforting place to walk into. I also used to read more when I was young too, and I haven’t read a book in f*cking years, honestly. I really hope they don’t ever permanently close down because I’d love to take my kids to a Barnes & Noble. It’s so fun.

A lot of artists, including you, are releasing your new albums on cassette tapes. Why is that?

Lemasters: That’s hilarious. To be honest, I have no idea. That’s something that the people that we work for want to do. Literally, I could care less if it’s on cassette. I really do not care, so I don’t really know why.

Preston: See, I think that it’s a cool format of physical music. I think that if you have the right system, it sounds really good. Even when we’re producing our record, there’s plug-ins, like sketch cassette or whatever, that emulate the way that cassette sounds. When I was in high school, me and my friends were driving cars that didn’t have Bluetooth or an aux, so what you do is buy that cassette thing and it goes into your cassette player and then you have a cable so you can play music from your phone. So then making cassettes for new music kind of made sense because there was a time when that was the only way that I could listen to music that I wanted in my car.

On Hearing Their Songs In The Wild & Not Getting Jaded

Is there a song you’ve written that you’re most proud of?

Minnette: It's kind of a cop-out answer, but I’m just really proud of “Are You Bored Yet?” because it’s a song that I’ve really liked from the second we started writing it and I still really like it now. And it has managed to be one of the defining things of our band and gotten a lot of love and attention, so I feel really lucky to be in that position. I feel like a lot of people, they get a super popular song and then they feel burnt out by it or jaded or whatever. But for me, I’ve always loved that song.

Preston: I agree. I hear that song in the wild sometimes. There’s this place in LA that I like, a bar, and it came on the speakers and I was like, “It sounds good in this context.” Just people living their lives, it’s just playing, this makes sense. So I’m going to say that as well.

Lemasters: I love the simplicity of “Only Friend,” the first song on Nothing Happens, that’s what I'm most proud of.

On the flip side, is there a song that you never want to play live again?

Minnette: You’re going to get our fans mad at us.

Preston: There is one, but I don’t know if saying it will have repercussions or not because our fans see it all.

Is there a lyric, whether it's yours or somebody else’s, that you love the most?

Lemasters: I like [Arctic Monkeys frontman] Alex Turner’s [“Suck It and See”] lyrics, “You’re rarer than a can of dandelion and burdock, and those other girls are just post-mix lemonade.”

Minnette: I’m going to go with, “To the window, to the wall, ’til the sweat drop down my balls.”

More like this
Marcus Mumford, Open Book
By Ilana Kaplan
The Indigo Girls Taught Me Queer Relationships Could Be Messy, Too
By Hannah Soyer
Charlie Puth’s “Loser” Is Based On A Heartbreaking Real-Life Text Message
By El Hunt
The Meaning Behind Lewis Capaldi’s “Someone You Loved” Is Actually Really Tender
By Sophie McEvoy
Get Even More From Bustle — Sign Up For The Newsletter