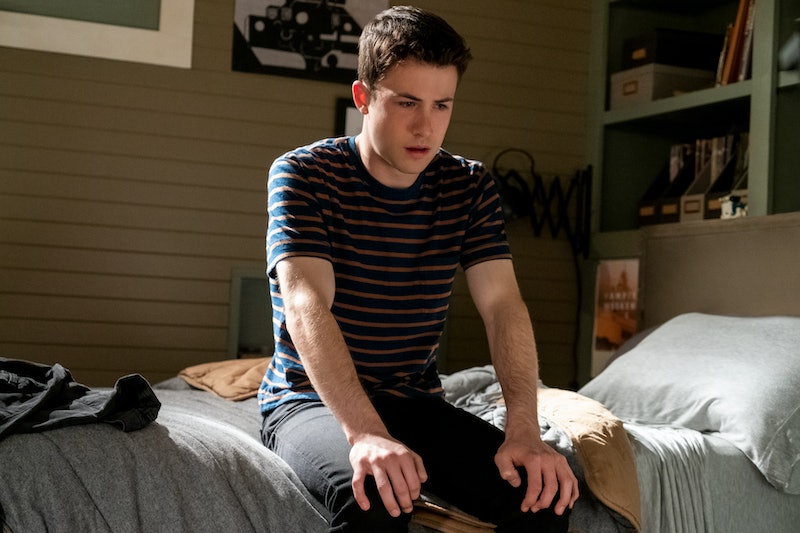 Spoilers ahead for 13 Reasons Why Season 4. The final episode of 13 Reasons Why left many fans completely devastated, but the show's stars were actually delighted with the way things ended up. In a recent interview with Entertainment Weekly, Dylan Minnette revealed that he wanted Justin to die in the 13 Reason Why finale. In fact, he said that he and costar Brandon Flynn actually pushed for it to happen. In the final episode, Justin — recovering from his addiction and living with Clay and his family — was revealed to be HIV positive, which had developed into AIDS, and he soon died after a lung and brain infection.

Though it was hard for fans to see Justin's redemption arc end so tragically, Minnette felt the last-minute twist was satisfying. "I remember all season Brandon and I were specifically hoping that it would be Justin," he told EW. "We were pushing for it and we would plead to [creator Brian Yorkey], making the case of why we feel like it should be him, because he and I both felt that it would have the biggest emotional impact on the series given Justin's entire arc."

He continued by acknowledging that "of course it's devastating and tragic and we know that people would love to see him survive, but I think that's what makes [the moment] all the more powerful." Minnette added that killing off Justin is "the most depressing move the show could make," but that it felt right for 13 Reasons Why to end with such a "devastating" finale twist.

In addition to living up to the series' heartbreaking reputation, Minnette felt that the whole scene brought Clay and Justin's stories full circle. "It feels really poetic because the biggest arc of a relationship that Clay has had in the show is with Justin," he said, adding that the first and last conversations Clay has on the show are both with Justin (even though the final one is in his head).

"They're clearly enemies in Season 1, and then it goes all the way to them loving each other more than anyone and becoming brothers and holding his hand on his deathbed," Minnette continued. "It feels like the perfect bookend because the finale sort of feels like the story of Justin and the first episode did because he was the first tape."

And it wasn't just Justin who got the closure he was looking for in the Season 4 finale, according to Minnette. "All Clay ever wanted to be, throughout the entire course of the series, was somebody's positive influence," he said, referring to the scene where Clay reads Justin's college essay. "In the end, hearing from Justin, the person he loves most, that he was his brother and his positive influence, I think that's why watching it I'm so happy with the decision and it gets me every time."

Still that didn't make filming those final moments between Clay and Justin any easier for the actors. "We'd already done a couple takes and then [Brian Yorkey] came in and said, 'Okay, so this is the last scene you will ever shoot together, and rolling…'" Minnette recalled. "And then we just did the take and I think they used the entirety of that whole take. It was very, very emotional." Regardless of how fans feel about the way 13 Reasons Why ended, at least they can take comfort in the fact that Minnette and Flynn cried just as hard making it as they did watching it.