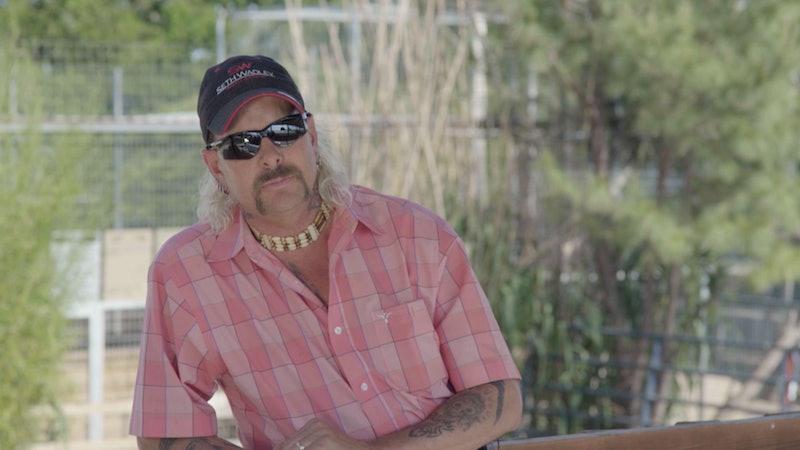 Whereas Netflix's Tiger King followed the eccentric crew of people running Oklahoma's controversial G.W. Zoo, Animal Planet's Surviving Joe Exotic puts the focus on the big cats living there. In this exclusive clip from the upcoming special, new subjects go into greater detail about how Joe Exotic (real name: Joseph Maldonado-Passage) treated the animals under his care. (Exotic was convicted in April for several wildlife violations, including allegedly killing five tigers, though he claimed in a lawsuit that he was falsely arrested and imprisoned.)

In the clip, former G.W. employee Gaylynn Eastwood claims that once a big cat was unable to breed or make him money, Exotic would deem them "junk cats" and either send them to another facility or move them to a smaller cage. "There's just no concern for an animal that is basically — what was his term? — useless and just costing him money because he had to feed it," she explains.

Wolves and Warriors founder Matt Simmons, who assisted with rescuing two lions and 26 wolves from the G.W. Zoo, paints an even darker picture, claiming, "The most likely prognosis for any animal lowest on the rung in Joe's facilities: They get shot and buried in the backyard."

The Animal Planet doc also includes new behind-the-scenes footage, as well as one of Joe's last formal interviews, which was filmed for the Wolves and Warriors docuseries four months before he was arrested in 2018. (Exotic is currently serving a 22-year prison sentence for the wildlife charges and an alleged attempt to hire two hitmen to kill Big Cat Rescue owner Carole Baskin.) Former G.W. manager Saff Saffery, who lost an arm to one of Joe's tigers, provides new information in the special as well.

Surviving Joe Exotic may have a more uplifting ending than its Netflix counterpart, though. Animal Planet promises to follow the "touching and inspiring journeys of the animals who survived from under the direct care of Joe Exotic," including visually impaired tigers Kryxis and Kadira, whose vision was restored after their rescue from the G.W. Zoo. As the network notes in a press release, "We’ll follow these stories of hope and learn more about what’s next for the innocent animals who were caught in the endless cycle of neglect and mistreatment that exists in the world of big cat and exotics trade."