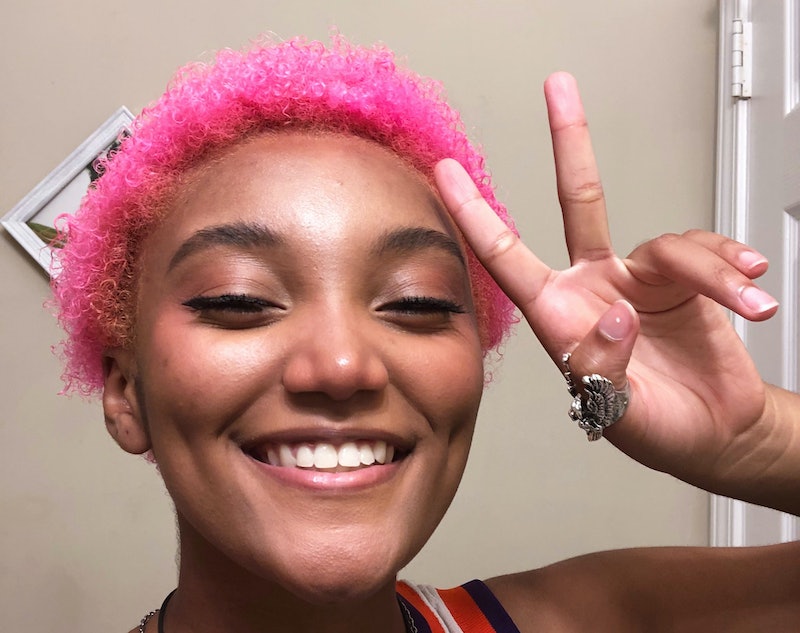 When celebrities (virtually) hang out with Bustle writers, we want to give them the chance to leave their mark. Literally. So we hand them a pen, a piece of paper, a few questions, and ask them to get creative. This time, We Are Who We Are star Jordan Kristine Seamón is leaving her mark in the Bustle Booth.

Jordan Kristine Seamón was in the middle of ordering a Filet-O-Fish when her lawyer called to say she’d landed a starring role in We Are Who We Are, the HBO bildungsroman from the director of Call Me By Your Name. Seamón is making her TV debut as Caitlin Harper, a teenage army brat whose father is stationed on an American base in Italy just outside of Venice. Caitlin speaks fluent Italian, runs around Chioggia with her partners in mild delinquency, and drinks too much wine by the Adriatic Sea. Seamón, on the other hand, had never traveled outside the US before landing the role. "Before I got there, it was just excitement and telling literally everyone" — including the girl who took her McDonald's drive-thru order that day — despite being told to keep the news quiet.

That was almost two years ago. Now, Seamón has lived in Europe. For the role, she learned kickboxing, archery, how to shoot a gun, and how to speak Italian. When audiences meet Caitlin, she’s a prototypical tomboy, bonding with her dad over light sparring. But when she gets her period for the first time, she tiptoes toward questioning her gender, dressing in men’s clothes and flirting with local girls.

The show's spark comes when Caitlin meets Fraser (Jack Dylan Grazer), a new kid on base who notices and encourages her. Their friendship is what drew Seamón to the show. “Seeing two young characters build a very close relationship super-fast with one another and being able to bond and feel safe... You don't see that all the time," she says. Especially, she notes, in relationships between people of color on television. “It really drew me to the role seeing how diverse the show was. Not only the cast, but the [kinds of] relationships between the characters.”

Those on-screen relationships — the romances, the fast friendships, the sibling rivalries — spilled over the edges of the scripts and into real life. When we Zoom, Seamón’s hair is a halo of hot pink, her least favorite color. “My friend Francesca [Scorsese, who plays Britney], who's also in the show, dared me to do it.” She and her mom visited France with a fellow cast member and his mom, and all the kids in the cast took a trip to Venice, too. “I think that's what makes it look so good,” Seamón says of the chemistry on set. “The genuine fun relationship between all of us.”