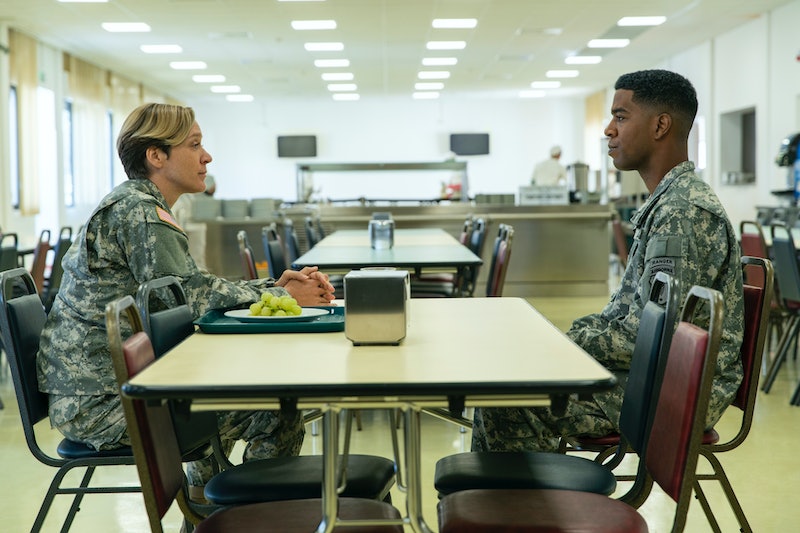 We Are Who We Are is conspicuous in its literary references, but not forthcoming. This week’s object of ambiguous significance is a copy of the music history 27 by Howard Sounes, which Fraser gifts to Jonathan. The token is both an emblem of how closely Fraser’s been listening — “There’s still time to be a rockstar,” he inscribes, referring to the childhood dream Jonathan revealed in last week’s episode — and what Fraser overlooks on account of his own youthful gusto. Unlike Amy Winehouse, Janis Joplin, Jimi Hendrix, and the other subjects of Sounes’ profiles, it is already too late for Jonathan to die at 27. He's an adult. But perhaps like the other adults who populate We Are Who We Are, he's as blind to his effect on his boss’ kid as the kids can be to the realities of the adult lives around them.

Take Richard Poythress. Still reeling from Caitlin’s decision to shave her head, he reasserts his control over her by grounding her, then attempts to massage the dynamic with a father-daughter camping trip. The mandated bonding is less about what imaginary rule she's broken (in the episode’s opening scene, Richard palms her head affectionately) and more to do with Richard’s fear of losing his centrality to Cait's life. His first attempt to re-ingratiate himself is a little pathetic: he cedes control of the radio dial to his teenage daughter. When she doesn’t roll over and die of gratitude at the gesture, he, with his predictably heavy hand, threatens to confiscate her phone. But later, shrouded by falling darkness and all the metaphors it suggests, he misses the mark again, warning Caitlin that Fraser is gay and can’t love her back. He sincerely wants to protect her, but he doesn’t take the time to know her. He’s so sure that he’s losing her with every small change in her that he doesn’t notice how she still yearns for his approval. “I’m still me, Dad,” she insists. It’s not the whole truth, but she says it anyway, equally anxious to affirm that she can be important to him even as she changes.

If Richard’s mode of control is reactionary, Sarah Wilson’s is anticipatory. She’s so confident she’s attuned to Fraser’s needs that she actually encourages his relationship with Jonathan. “This place doesn’t suit him,” she tells her wife, who questions whether it’s smart that Fraser spend so much time with someone twice his age. But Sarah sees only benefits to him befriending “grown-up males” — “someone who can be like an older brother or a father figure.” Eager to remain in Fraser's unpredictable graces, she doesn’t notice or acknowledge her son’s swelling crush.

It’s a parenting confidence that Sarah doesn’t limit to her own kid. “Does your father know when you say [you want to be a] soldier, you mean male soldier?” she asks Caitlin, who she spots loitering outside the barber shop. It’s only been a few days since Caitlin started wearing her hair shorn, but Sarah gives her a pamphlet on counseling and offers to take her to see an endocrinologist — “just to talk.” Hormone treatment isn’t a subject that Caitlin’s raised, even with Fraser, but later that night, a receptive Cait watches testosterone injections on YouTube.

It’s easy to see how Sarah’s intervention could make more trouble between her and Trump-booster Richard if it becomes known, but what's interesting is that their intentions in this episode are much less misaligned than their politics. Both perceive themselves as increasingly irrelevant in the decision-making of their teenaged kids, an evolution as natural as it is upsetting to them. But where Richard’s parenting is corrective, Sarah’s is directional. One is locked in a futile battle against inevitable change, the other desperate to stage manage what she perceives around the bend. If only they knew what they had in common.