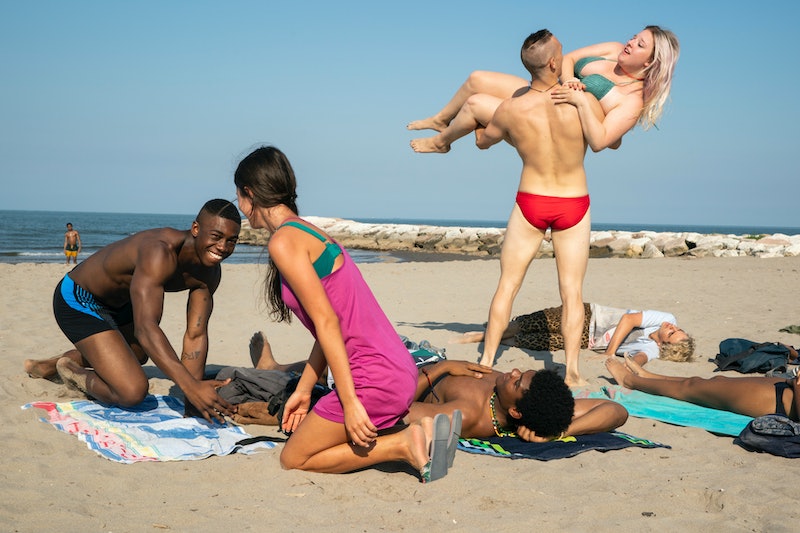 Spoilers ahead for We Are Who We Are Season 1 Episode 7. It’s grief week on We Are Who We Are. The series, now on its seventh and penultimate episode, has developed a pattern of oscillation between atmospheric meditations, like last week’s on parenting, and plot-heavy episodes like this one. Craig’s death in an IED explosion in peacetime Afghanistan has a way of propelling every sluggish narrative thread forward, effectively hurrying the characters into place ahead of next week's finale.

The core group reunites in mourning at the abandoned villa where last they celebrated Craig and Valentina’s wedding. Dressed in all black, the young bride stares into the pool as a 19-year-old widow. “Now I belong to him forever,” she says. It’s an arresting take on how death freezes people in time, including those who go on living. Weeks ago their marriage seemed like a whim, romantic but reversible. Now it’s part of what she brings with her into the rest of her life. For Danny, Craig’s death is yet another site of present-day disaffection, and his grief takes various inappropriate forms, from making out with Valentina to getting high and beating the walls of the mansion with a silver obelisk he wields like a baseball bat. Still, he’s on time for his morning prayers. For me, this is We Are Who We Are’s most distracting storyline, in part because Danny is the show’s only representation of Islam. It’s not uncommon to seek religion in times of personal turmoil, but there’s no indication, at least not so far, it’s bringing him any peace; if anything, Danny’s anger and restlessness seem to progress alongside his YouTube-directed conversion.

Back on base, life is no less combustible than at the villa. With no Cait to keep him company, Fraser finds Jonathan, who is already on a nearly-naked romp with the woman we met last week. Fraser joins them for a few minutes of shirtless dancing before wordlessly running away. There’s a sense he’s pushed his feelings as far as he can go; his crush on Jonathan — who is twice his age — perhaps exceeding his readiness to act on his feelings or act on them in this context. He falls asleep drunk under the dining room table, a kid again cradled between his two moms.

But the most consequential moment of the episode happens as Sarah and Maggie get into bed. At a memorial held for the fallen soldiers earlier in the day, Sarah was interrupted by a drunk Richard, who publicly blamed her for the deaths. His slurred outburst is a final straw that prompts her to suggest that she and Maggie move off base. The first straw, of course, is Maggie’s affair with Jenny, which Sarah reveals she knows about. Instead, Maggie persuades her wife to have Richard and his family transferred from Venice altogether.

And maybe this is where it was always headed. Richard and Sarah have been in conflict for weeks over the readiness of the troops to ship out and over their kids. But the shockwaves from Craig’s tragic death over 6,000 kilometers away have hastened their feud to an end, just as they killed off the romance between Jenny and Maggie and divided Cait from Fraser. On We Are Who We Are, personal peace proves just as elusive a concept as peacetime.