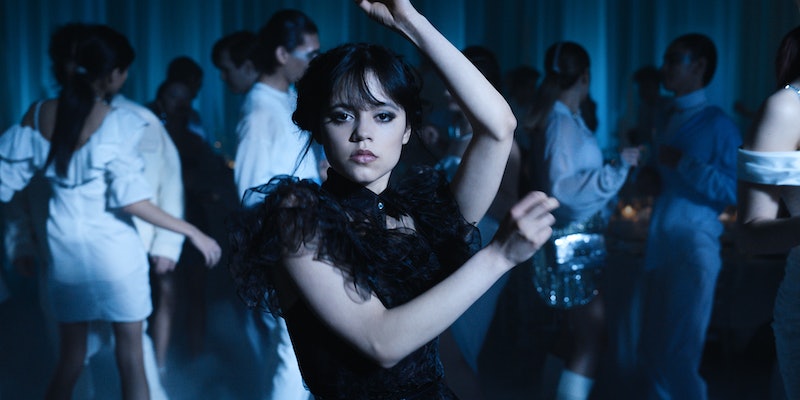 Netflix’s new Wednesday series just broke a streaming record set by summer’s Stranger Things Season 4 (which is no small feat). According to Variety, the spooky series about Wednesday Addams was viewed for a total of 341.2 million hours in its first week alone, the highest count of any English-language TV show on the streamer in the same timeframe. (Stranger Things Season 4, by comparison, got 335.01 million in its debut week.)

Of course, even if you didn’t contribute to that record personally, there’s a good chance you’ve seen some of Wednesday’s most iconic moments on social media — from her unblinking stare to a certain dance scene.

To recap: during Episode 4, “Woe What a Night,” Wednesday attends the Rave’N dance with Tyler and puts on an elaborate, unconventional dance routine for her date. The song she dances to is “Goo Goo Muck” by The Cramps, and Jenna Ortega actually choreographed the number herself, pulling inspiration from a variety of sources to do it. In a recent tweet, she specifically referenced Siouxsie Sioux, Lisa Loring, Lene Lovich, Denis Lavant, and Bob Fosse’s “Rich Man’s Frug” as influences on her performance, as well as “archival footage of goths dancing in clubs” in the 1980s, she added.

As several viewers pointed out, the scene also featured a brief, blink-and-you-miss-it nod to Wednesday’s dance moves from the original Addams Family series.

Many users were simply thrilled at the unique routine — and shared their praise on Twitter.

Several viewers were reminded of other dances from social media and pop culture — including the robot girl from the upcoming M3GAN movie.

Despite all the love for the Wednesday dance scene, though, it recently caused some controversy. Ortega told NME that she was actually sick with COVID at the time and said the scene was “awful to film” as a result.

The morning of the shoot, she woke up with body aches, though she didn’t yet know they were caused by COVID. “I felt like I’d been hit by a car and that a little goblin had been let loose in my throat and was scratching the walls of my esophagus,” she said. “They were giving me medicine between takes because we were waiting on the positive result.”

Ortega added that she wanted to redo the scene later but “didn’t have time.”

MGM told NME that production followed “strict COVID protocols ... and once the positive test was confirmed, production removed Jenna from set.” However, several viewers pointed out that she should not have been working while exhibiting symptoms — positive test or not.

More like this
Netflix Shut Down 'Bridgerton' S3 Rumours About A “Very Dark” Storyline
By Bustle
'The Crown' Season 6 Has Suspended Filming "Out Of Respect" For The Queen's Death
By Bustle Staff
Ozzie’s Coming Out Scene With Kitty On 'That ’90s Show' Has Twitter Sobbing
By Brad Witter
The Mysterious Gunther Corporation From 'Gunther’s Millions' Has Dissolved
By Brad Witter
Get Even More From Bustle — Sign Up For The Newsletter
From hair trends to relationship advice, our daily newsletter has everything you need to sound like a person who’s on TikTok, even if you aren’t.