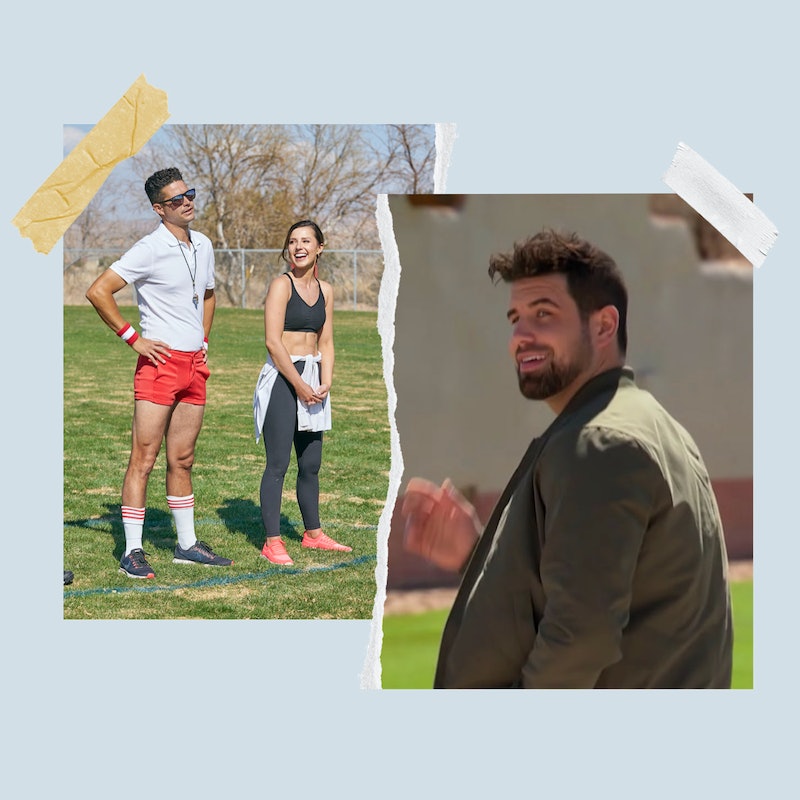 At the end of last week’s episode of The Bachelorette, Katie Thurston invited franchise alum Blake Moynes to join the remaining 14 contestants on her season. At this point, the guys still have no idea that Moynes showed up at the resort, let alone that he’ll be joining the cast. However, in a recent interview with People, everyone’s favorite Bachelor in Paradise bartender, Wells Adams, teased that Moynes’ arrival doesn’t go over very well. Shocking, we know.

Without naming Moynes directly, the radio host teased that this evening’s group date gets “pretty intense.” Adams will host a game of Bachelorette Bash Ball, a hybrid of rugby and basketball. But with so much at stake and a new (but also old) contestant thrown into the mix, tensions couldn’t be higher. “Everyone was coming in a little heated and stressed out,” he told the magazine. “I think they let some of their aggression out on the date — maybe a little more than they really needed to.”

Fortunately, Adams will bring some levity to the situation, as usual. “I thought that dressing them up in stupid unitards would be a good sojourn from the serious nature of their experience thus far,” the Season 12 Bachelorette contestant said. But as the contestants run around in their ridiculous outfits (complete with “giant bulges in their crotchal region” and “cutout butts with hearts printed on it,” per Us Weekly), Adams himself will be sporting shorts “so high that we’re concerned.” “The mouse might come out of the house,” he told People.

Despite his best attempt at keeping things funny and lighthearted, Adams told Us Weekly that the game quickly became “chippy” and “dramatic.” Still, a few of the guys stood out to him for bringing their A-game. “Mike [Planeta] played a good game. Tre [Cooper] played a good game. Connor [Brennan] kind of hid in the corner, which I think was a smart play on his part,” Adams said. “Everyone took it really serious.”

Apart from their athletic skills, Adams told People that he noticed deep connections between Katie and a few of the guys. “Personally, I liked Connor [Brennan],” he revealed. “Connor and I talked for a long time. He was equal parts sweet guy and dork, and I really can relate to that. But they were all super nice guys.” Adams also named fan-favorite Michael Allio as a potential frontrunner this season.

The preview for tonight’s episode also teased Hunter Montgomery’s competitive side, which might be the reason a medic is called onto the scene. “Hunter, that little Tasmanian devil, did not disappoint,” Adams said, making it clear that the father of two arrived at the group date ready to win. “He was lighting dudes up left and right. I was proud of him. I was like, ‘Yeah, man, go get your girl.’”

More like this
How To Apply For 'Survivor' & Tips On How To Get Cast
By Meg Walters
Kendall Jenner Thinks Tristan Thompson "Wanted To Trap" Khloé With Another Baby
By Jake Viswanath
Khloé Kardashian Is Reportedly Dating A Private Equity Investor She Met Through Kim
By Jordyn Tilchen and Jake Viswanath
Who Is Nick Cannon Dating & How Many Kids Does He Have?
By Jordyn Tilchen and Radhika Menon
Get Even More From Bustle — Sign Up For The Newsletter