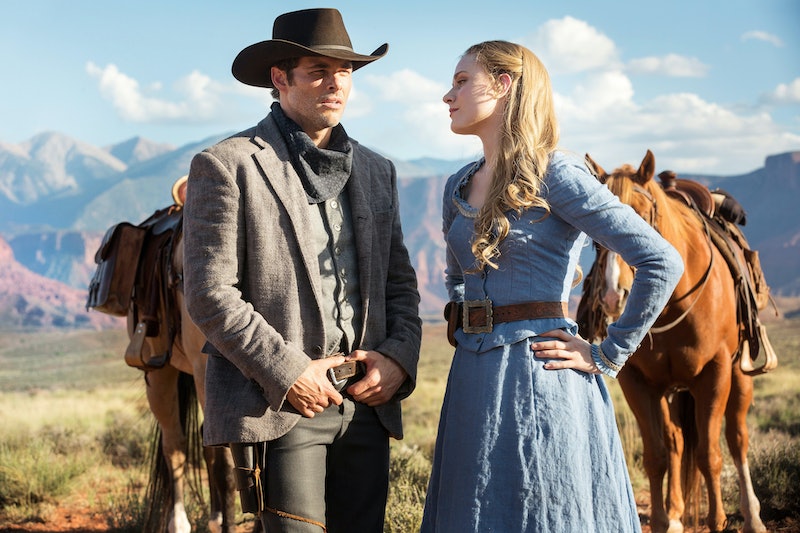 Spoilers ahead for Westworld Season 4, Episode 1. Dolores and Teddy are together again — sort of. Though Westworld fans haven’t seen James Marsden’s Teddy Flood since his Season 2 death, a character who looks a whole lot like him appeared for a brief moment to cap off the Westworld Season 4 premiere. Following Dolores’ Season 3 demise, Evan Rachel Wood’s new character, a writer named Christina, had felt like someone had been watching her lately ahead of a “mystery” date. In the episode’s final scene, she’s shown on her balcony pondering her next work before the camera cuts to Marsden standing in front of her apartment building.

Though the HBO series has yet to reveal exactly who (or what) Marsden’s Season 4 character is, Entertainment Weekly teased prior to the episode’s June 26 premiere that he and Christina would be going on at least one date this season. First confirming his surprise return alongside Wood and their co-stars Tessa Thompson (Charlotte), Ed Harris (The Man in Black), Jeffrey Wright (Bernard), and Angela Sarafyan (Clementine) at the ATX TV Festival in early June, Marsden was reluctant to give EW any more hints, telling the publication that he preferred to “remain a little mysterious about where you find me in the first episode, if at all.”

Even so, the actor previewed more generally what’s to come in Season 4, including that despite the new setting, not much has changed. “The themes of exploring human urges of violence and things like that are going to continue,” he explained. “And this season maybe we explore what the world looks like after Dolores set the humans and the robots free. Are they going to cooperate or are they going to vie for control? What happens when they vie for control? Will the hosts inherit these urges of violence? Some of the basic things that we continue to explore on this show, and definitely in Season 4 — we ask a lot of those questions. What happens next?”

In a joint Good Morning America interview with Wood on June 21, Marsden playfully dubbed Season 4 as “the return of Teddy Flood.” Even though fans were surprised by the comeback, the actor revealed that he’s been aware of the plan since at least 2018. “I knew at the beginning of Season 2 that I was going to go away for a bit and then come back,” he revealed to co-host Michael Strahan. “So I’ve known for years and had to lie to my family and friends and everybody, like, ‘Yep, he’s gone.’ ... I didn’t know in what capacity I’d be back, and I still don’t, to be honest. The show is that cryptic and mysterious, but I’ve known for a couple years now.”

Wood, for her part, shared that they were able to pick up right where they left off, “cracking jokes constantly” and reenacting scenes from Anchorman and Young Frankenstein between takes. As Marsden interjected, “It’s a very serious, dark, heavy show, and we have to keep it light on set, otherwise we’d lose our minds.”

As for what role Marsden’s character will play moving forward, Westworld Season 4 has only just begun.