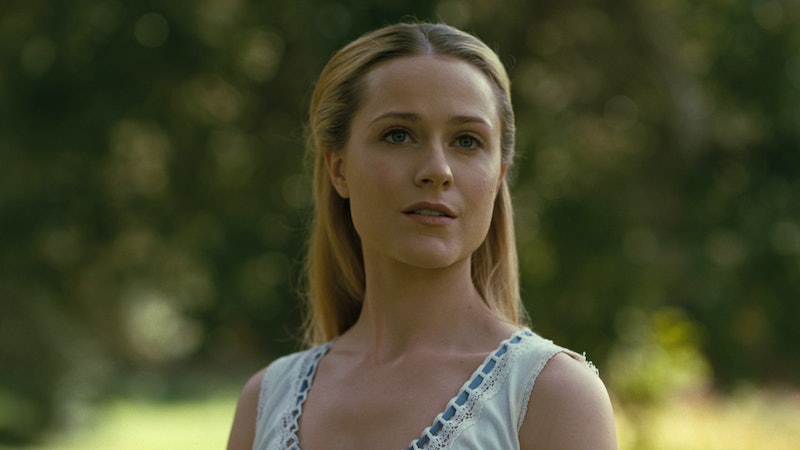 Spoilers ahead for the Westworld Season 3 finale. Turns out, Dolores didn't want to destroy humanity...she wanted to save it. But her plan also led to her downfall, leaving many viewers to wonder if Dolores will even be in Westworld Season 4. She's always managed to resurrect herself in one way or another after dying, but this time seemed particularly final.

In the end half of the finale, Dolores was captured and hooked up to Rehoboam by Serac and Maeve. Wanting the Forge key that he believed was hidden in Dolores' mind, Serac began to wipe her memories to torture her. It pained Maeve to see this, so she communed with Dolores in a dream space, at last learning her plan to rebuild a new, peaceful world — and that Bernard actually held the key. Meanwhile, Dolores uploaded herself to Rehoboam and installed Caleb as the new owner; Caleb then commanded Rehoboam to erase itself. Serac was defeated, but Dolores' body was left lifeless and memory-wiped, and Caleb and Maeve treated it as a final goodbye.

On Serac's end, wiping Dolores' memories was probably the smartest thing he could've done. Because Dolores is skilled in copying herself and creating new bodies, the only way to "kill" her is to erase the parts that make her who she is. If Dolores has no memories, the mastermind that was original Dolores is basically no more. Sure, there's the Charlotte copy and the rest of the hosts who were built from Dolores, but none of them see themselves as versions of their creator anymore. They all consider themselves their own beings, so it's unlikely they'd ever wear the body of original Dolores or somehow "revert" to her.

Dolores' conversation with Maeve also suggests that she really is gone. As the two stood in a memory of Westworld, Dolores told Maeve that while "so many of my memories were ugly," there were brief moments of kindness too. "They created us, and they knew enough of beauty to teach it to us. Maybe they can find it themselves," she said, recalling Teddy and Maeve's time with her daughter. "There is ugliness in this world. Disarray. I choose to see the beauty." She then disappeared in front of Maeve, suggesting that when she uploaded into Rehoboam and lost her memories, she really did cease to exist.

Maeve also confirmed Dolores' death, which gave it an extra layer of finality considering tht she was the only other host as powerful as Dolores. "We were never friends," Maeve explained to Caleb. "We had different stories. I never understood her, or her plan...not until the end."

This suggests this is the last time we'll see original Dolores as we came to know her, but the end credits scene with Bernard potentially complicates all that. We know Bernard has the key to the Valley Beyond, as well as all the Forge data and who knows what else. It's possible that a copy of Dolores is hidden somewhere in Bernard's mind, and that she may return in Season 4.

Dolores rebuilding herself would possibly cheapen her moving send-off in the Season 3 finale, though. Though her death is sad, having Bernard, Maeve, and Charlotte — all underutilized this season — become the main characters of Season 4 is an exciting prospect, and would fulfill Dolores' final wishes for them to truly have free will. We'll likely see Wood in flashbacks, but if Westworld really wants to take a brave step into the apocalypse, they'll let the other characters take center stage from here on out.

More like this
The 'Gossip Girl' Reboot Creator Is “Looking For A New Home” To Air A Potential Season 3
By Brad Witter
Shonda Rhimes Responded To The Surprise Exit Of A Day 1 'Grey's Anatomy' Figure
By Grace Wehniainen
Everything To Know About A Potential 'Lockwood & Co.' Season 2
By Gretchen Smail
This 'Gossip Girl' Wardrobe Error Has Gone Viral On TikTok
By Alyssa Lapid
Get Even More From Bustle — Sign Up For The Newsletter
From hair trends to relationship advice, our daily newsletter has everything you need to sound like a person who’s on TikTok, even if you aren’t.