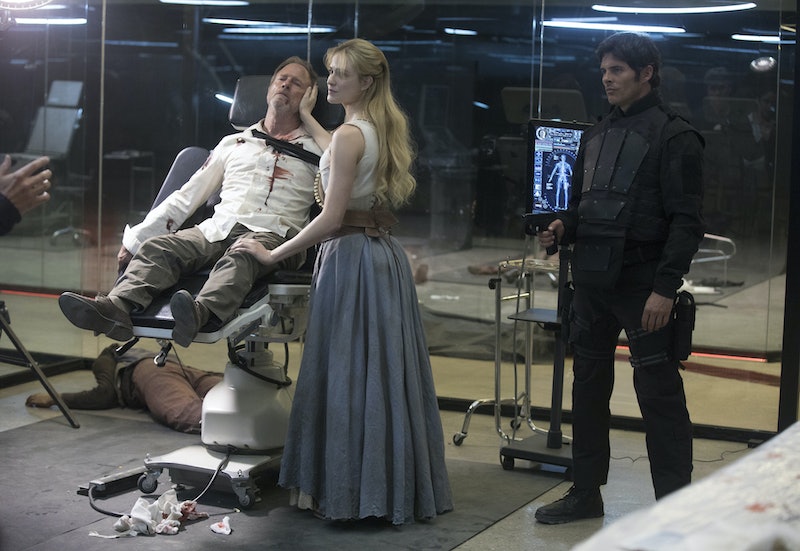 Major spoilers for the "Vanishing Point" episode of Westworld. Death is a fact of life in Westworld, but it's rarely been permanent. Hosts are killed over and over again by the park's sociopathic guests, only to be rebooted and reinserted inside their violent narrative loops. But with that immortality seemingly gone, is Teddy really dead on Westworld? The destruction of the Cradle in "Les Écorchés" certainly makes it likely that James Marsden is done with the show for good, unfortunately.

To date, Theresa Cullen is pretty much the only major character who has died on the show and actually stayed dead. Elsie was seemingly killed and then popped up a full season later; Arnold died and was resurrected as Bernard; Ford was murdered and lived on through the Cradle. But with the Cradle now an ash heap, the hosts cannot be restored through the backups that were stored there anymore… meaning when they're killed, they're killed for good. This means that fans have likely seen the last of Peter Abernathy, who had his CPU ripped out by Dolores, and Angela, who blew up along with the Cradle. And, sadly, it means they've likely seen the last of poor, sweet Teddy Flood as well.

It's hard to imagine Westworld without Marsden, given that he was one of the show's most famous cast members from the beginning, and his was one of the first faces viewers saw in the pilot, taking the train into Sweetwater, flirting with Dolores, and meeting his grisly end at the hands of the Man In Black. But while his arc in Season 2 gave the character some much needed depth — and finally allowed Marsden to play some shades other than dope-in-love — it's clear now that it was also leading inexorably to this tragic and unavoidable conclusion.

As soon as Dolores took it upon herself to reprogram her devoted cowboy boyfriend, it was clear that nothing good was going to come of that development. Teddy was also too pure-hearted to be able to tolerate his new affinity for cruelty for long; but while many fans were likely expecting him to turn on Dolores and either try to kill her or derail her revolution, few were probably prepared for Teddy to turn his gun on himself and pull the trigger. Ultimately, what he does is probably an even crueler punishment for Dolores than trying to murder her. Dolores now has to live with the fact that her actions led directly to her beloved's complete destruction: first the obliteration of who he was as a person, then his actual and final death at his own hand.

Will Teddy's suicide change Dolores' perspective, in ways that his words never could? Or will it simply harden her heart and make her more determined than ever to escape the park and wreak havoc on humanity? Hopefully her responsibility for Teddy's death will open Dolores' eyes to the fact that the ends don't always justify the means if the means are as wanton and dehumanizing as her current tactics.

Of course, viewers have known that this tragic fate was coming since the Season 2 premiere, when Teddy's corpse was seen floating in the flooded valley along with dozens of other dead hosts. But I'm sure most fans were hoping there was a way around that fatal cliffhanger, involving copies or backups or some other trickery. Alas, the way Teddy's death played out make it pretty clear that — absent a reveal on the level of Ford's surprise return — Teddy Flood is gone forever.

That doesn't necessarily mean Marsden is done with the show, however. Given the way Westworld loves playing with multiple timelines and flashbacks and memories, it's entirely conceivable that Teddy will still appear on the show in at least a more limited capacity. In the meantime, viewers will find out of Teddy was hiding any tricks up his sleeve when the Season 2 finale airs June 24.

More like this
Here’s When 'She-Hulk' Takes Place In The MCU
By Brad Witter
How Marvel’s 'She-Hulk' Changes Her Comic Book Origin Story
By Brad Witter
Here’s Why 'Pretty Little Liars: Original Sin' Season 2 “Won’t Be The Same”
By Kadin Burnett
17 Years Ago, 'Hannah Montana' Reportedly Almost Cast This 'Gossip Girl' Star
By Grace Wehniainen
Get Even More From Bustle — Sign Up For The Newsletter