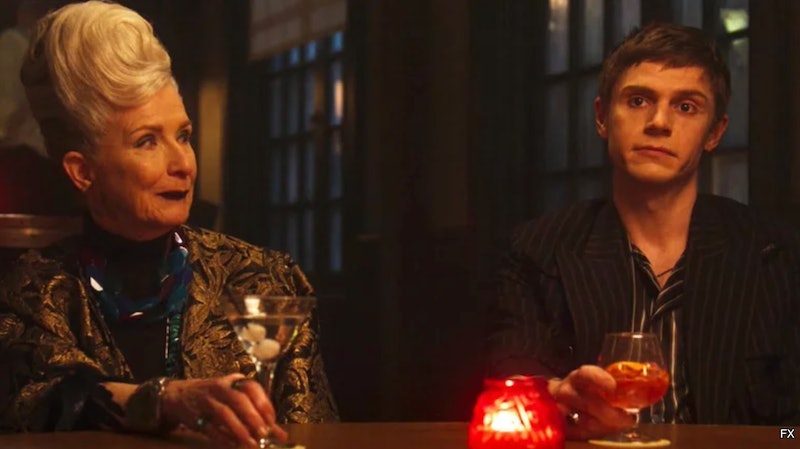 Episode 4 of American Horror Story: Double Feature filled in a lot of blanks about the mysterious goings on in Provincetown, including the backstory of the enigmatic Chemist (Angelica Ross) and the dissemination of her magic muse pills. But there’s one question that still remains: what’s the deal with the red porch lights everyone keeps leaving on?

The first time we saw the lights was in Episode 1, when Harry (Finn Wittrock) passed them on his dimly lit walk into town. Like everything in Red Tide — the first part of Double Feature’s two-part season — they seem to connect to the muse pills, which almost everyone in Provincetown is either afraid of or dependent upon. As we learned from Austin (Evan Peters), the pills can accelerate your talent if you take them — but only if you are, indeed, talented. If you’re a hack, you’ll turn into one of the pale, decrepit creatures prowling the town. Either way, those who use muse require human blood to sustain them, but the talented are able to maintain a more civilized life.

One explanation is that the red lights somehow offer protection from the pale ones. In Episode 1, Harry is followed by one of the creatures and attacked in his home — which notably doesn’t have a red light outside. One Redditor pointed out that the bar Harry met Austin and Belle (Frances Conroy) in also had a lot of red lighting and candles, perhaps warding off the pale people. Another commented that it reminded them of the story of Passover in the Old Testament, wherein God instructed Moses to tell the Israelites to put lamb’s blood above their doors so that the Angel of Death would “pass over” them during the ten plagues and spare the lives of their firstborn.

There could also be a more nefarious meaning behind the red lights. When tuberculosis Karen (Sarah Paulson) delivers a baby to a bloodthirsty Belle to feast on, there is a red light on outside of her house. However, as soon as Karen scrambles away from Belle’s stoop, the light shuts off. Perhaps, instead, the red lights serve as a signal that the muse-users at home require fresh blood — a more civilized way to go about things than hunting down victims in the street. As one of the more sophisticated and revered muse users in Provincetown, Belle has the luxury of having others do her bidding.

AHS Season 10 has no shortage of red imagery; it is, after all called Red Tide. But it’s clear the lights play some sort of critical role in the story. And with just two episodes left before the season pivots to Part 2, Death Valley, the answer should be illuminated soon enough.