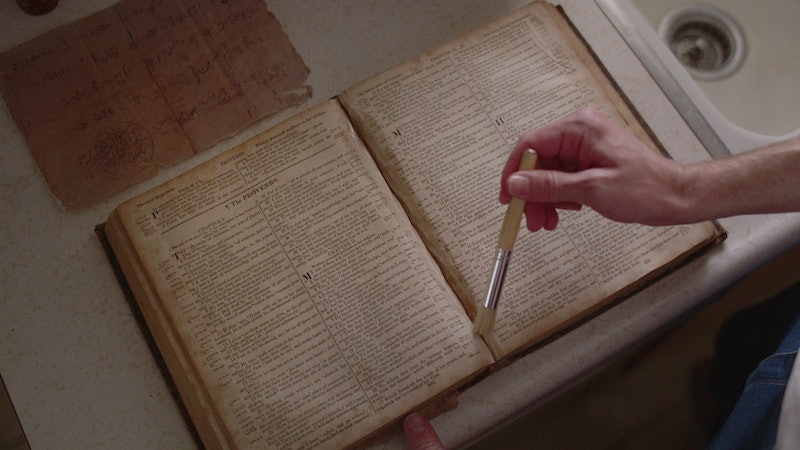 As detailed in Netflix's latest true crime documentary, Murder Among the Mormons, the Salamander Letter was a controversial forgery that revised Mormon history. The mid-1980s discovery even led to counterfeiter Mark Hofmann carrying out the Salt Lake City bombings to cover his tracks. But why did one letter cause such a tragic disruption? Well, it posited a version of Mormonism founder Joseph Smith's story that fundamentally changed the context of the religion and how it came to be — swapping the angel Moroni for a magical white salamander.

The letter, written from the point of view of Smith's scribe, Martin Harris, was later printed in the Los Angeles Times. Assuming this character, Hofmann described the encounter in which Smith was said to have found the gold plates that would eventually become The Book of Mormon.

"In the fall of the year 1827 I hear Joseph found a gold bible," he wrote. "I take Joseph aside and he says it is true I found it 4 years ago with my stone but only just got it because of the enchantment the old spirit come to me 3 times in the same dream and say dig up the gold but when I take it up the next morning the spirit transfigured himself from a white salamander in the bottom of the hole..."

The spirit, he claimed, wouldn't give up the gold without Smith's dead brother Alvin present. This detail, plus the presence of the magical lizard in lieu of the traditional angel depiction, lent itself to a more mystical interpretation of Mormonism's origin story and contradicted the church's portrayal of history.

Hofmann's letter also described how Smith was able to translate the plates, writing that "Joseph found some giant silver spectacles with the plates he puts them in an old hat & in the darkness reads the words & in this way it is all translated & written down."

In Netflix's doc, former assistant church historian Richard E. Turley Jr. described the impact of the letter as offering "a kind of folk magic context." Years before, in 2006, Latter-day Saint historian Mark Ashurst-McGee wrote in his "Moroni as Angel and as Treasure Guardian" text, "This letter and other Hofmann forgeries portrayed Joseph Smith’s early religious experiences in terms of treasure seeking and magic." The work, which is available via Brigham Young University's archives, continued, "The startling new documents caused Latter-day Saint historians to reconsider the founding events of the restoration of the church. As one recent critic poses the question: 'Was he [Moroni] a magical guardian of a treasure or a biblical angel of the gospel?'"

Ultimately, the letter was so radical that it drew a massive amount of unwanted attention Hofmann's way. When Hofmann felt the pressure of debtors and skeptics closing in, he devised a plan and set off bombs that ultimately killed two people.