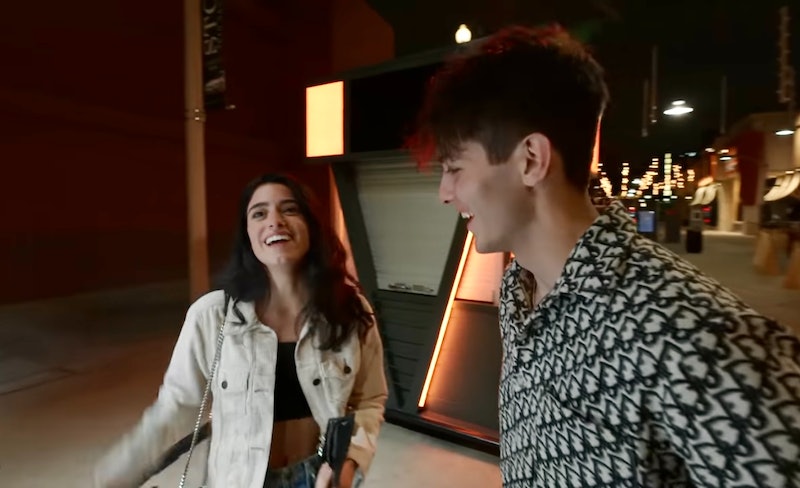 The drama surrounding Dixie D'Amelio and Griffin Johnson’s breakup has lasted longer than the relationship itself — and is once again dredged up in Hulu’s new reality series The D’Amelio Show, in which Dixie references it multiple times.

For those just catching up, Dixie and Griffin dated for a handful of months before Griffin revealed in a July 2, 2020 YouTube video that he’d officially asked Dixie to be his girlfriend. However, Dixie confirmed they’d split only a month later in a video chronicling their final date together. “Hey, so we actually broke up,” Dixie prefaced the Aug. 2 video. “But I had this video scheduled for today so I’m posting it anyways. It was fun.”

What happened between the two posts was messy, to say the least. On July 6, fellow Tiktok star Chase Hudson — the ex of Dixie’s sister Charli — tweeted that Griffin had cheated on Dixie with two girls. Shortly afterward, a TikTok user named Madison Galley threatened to “expose Griffin Johnson,” posting screenshots of the Sway House member DMing her on Snapchat and claiming to be single. In the days before Dixie posted her video of their last date, she and Griffin also unfollowed each other on social media.

About a month later, the exes began addressing their breakup publicly. Griffin claimed in a Sept. 12 video with Bryce Hall that he “did Snapchat a girl” and jokingly asked her to “send toes,” but denied ever cheating. (Dixie indirectly responded by tweeting a photo of her own toes the same day). Griffin then doubled down, releasing a track called “Convenient” on which he sang that the cheating claims were “f*cked up” and implied that Dixie was dating Noah Beck, a fellow member of the Sway House. (Both Noah and Dixie denied being more than friends at the time).

Dixie initially laughed the song off, joking to Hollywood Fix that she “[couldn’t] sleep at night,” but later posted a TikTok video to the tune of “Convenient” during which she shared receipts regarding the cheating allegations. Among them were multiple screenshots including what appeared to be an apology text from Griffin “own[ing] up to it completely” and admitting to hurting Dixie “in a way that can never be forgiven or forgotten.”

Afterward, Griffin admitted to “f*cking up” in a Sept. 23 tweet. “I’m not perfect. God knows I’m not even close but time for others to admit the same,” he wrote. That wasn’t the end of the drama, though. During a November appearance on the BFFs featuring Josh Richards and Dave Portnoy podcast, Griffin further defended himself by explaining that he had responded to a Snapchat DM during a “four or five day period” during which he and Dixie were on a break and he was feeling sad. “I did my fair share of wrongs,” he conceded. “I should have never messaged the girl at all, not going to lie, but it was during a weird break up, I was just messed up in the head at the time.” What’s more, Dixie did eventually begin dating Noah about a month after her breakup from Griffin, but Griffin claimed a romance between them started before then.

Appearing on the same podcast in May, Dixie explained that she’d moved on from the contentious breakup. “It was just a dumb, immature relationship,” she said. “We shouldn't have been dating in the first place. We were cooler as friends.” She added that while she’s “not friends” with Griffin anymore, she harbors “no bad blood” toward him.

That’s not to say Griffin and Noah’s friendship wasn’t affected. “I love Noah and I don't really care about the past. I still consider him one of my friends, but it definitely puts a weird thing between us in a way,” Griffin told People in December. “I wish it could just be over and I could carry on normally and not have to worry about that.”

He may not feel the same way after watching The D’Amelio Show.

More like this
Kendall Jenner Thinks Tristan Thompson "Wanted To Trap" Khloé With Another Baby
By Jake Viswanath
Khloé Kardashian Debuts Baby Boy On 'The Kardashians' Season 2 Premiere
By Jake Viswanath
Where Is Armie Hammer’s Ex-Wife Elizabeth Chambers Now After 'House Of Hammer'?
By Grace Wehniainen and Radhika Menon
The 'Reasonable Doubt' Cast Includes A 'Save The Last Dance' Reunion
By Grace Wehniainen
Get Even More From Bustle — Sign Up For The Newsletter