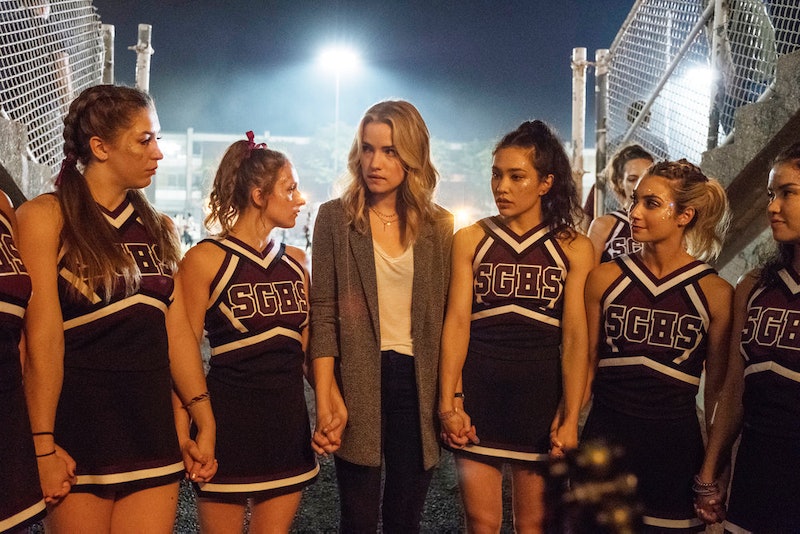 Menacing teen girls is a staple of the thriller genre, and Megan Abbott's novel Dare Me is all about the darker side of the teenage psyche. A story of jealousy, obsession, and power, Dare Me explores what happens when cheerleading squad captain Beth and her obedient friend Addy clash with Collette French, the girls' steely and enigmatic new coach. If the USA Network adaptation follows what happens in the Dare Me book, it's sure to be a bloodbath.

The book introduces high schoolers Beth and Addy, whose friendship is thrown into chaos with the arrival of their new cheer coach, Collette. Though Addy portrays herself as submissive to Beth, she says that all the cheerleaders "owned" the previous coach. "Especially Beth. Beth Cassidy, our captain. I, her forever-lieutenant," Addy says. "Her right hand, her fidus Achates. That’s what she calls me, what I am. Everyone bows to Beth and, in so doing, to me."

Beth immediately harbors a disdain for Collette, who cannot be cowed, does away with the position of captain, and axes Beth's booty-shaking routines for tricky physical maneuvers. Collette whips the squad into shape (often by body-shaming them and encouraging eating disorders), and Beth becomes enraged: not because she cares about the squad's well-being, but because her control of them has loosened. Worse, she sees Addy drifting away from her to idolize Collette and the strict guidance she offers.

"There’s always the one friend who takes all the air out of the room or is such a presence and the other one who is secondary and is longing to be that bigger person," Abbott explained to Fiction Writer's Review. "There’s something about that complicated female dynamic that I think has been a pulse through a lot of my stuff."

There's also a fissure of attraction running between Addy and Beth, which only feeds into the jealousy Beth has towards Collette, the new apple of Addy's eye.

Things get even messier when Collette invites Addy and the girls to drink and party at her house. (Yes, this is sadly a grown 20-something woman doing shots with high schoolers.) Collette's husband, Matt French, is a straight-laced workaholic who always lurks on the periphery and never joins in; it's clear the two have a strained marriage. Later, Addy and Beth discover Collette cheating on Matt with army recruiter Will Swenson. Addy soon realizes Collette is actually an unhappy woman and a distant mother, and her interest begins to wane. Beth, meanwhile, is gleeful that she finally has something to blackmail Collette with. Then Will Swenson ends up dead, with his death ruled as a suicide.

Amid the ongoing tug-of-war between Collette and Beth, Addy begins to suspect that Will was actually murdered. Did Collette do it, or did Beth, so she could pin it on Collette? Addy only grows colder and more disenchanted with both women, as she questions her own loyalties and whether she really knows either woman at all.

In the final chapters, Beth realizes that she's unable to win back the allegiance of Addy and the rest of the girls, and so purposely throws herself off the top of the cheer pyramid. Beth nearly dies, and in the ensuing fallout, Colette comes clean. Will didn't kill himself during a confrontation with her husband, as was first claimed. Matt killed him after discovering their trysts at Will's apartment, and then the Frenchs covered it up to look like a suicide. There are other details that come out, such as how Beth manipulated events so that Matt learned of Collette's infidelity.

Beth is never punished for having a hand in the affair, but it's Addy who really comes out on top in the end. Despite being portrayed as enjoying second fiddle the whole novel, Addy becomes cheer squad leader. In creepy Gone Girl fashion, Abbott subtly reveals that Addy was always an unreliable narrator, and leaves you with the unsettling feeling that this outcome — Beth gone, and Collette disgraced — is what Addy had intended all along.

This article was originally published on Dec. 29, 2019