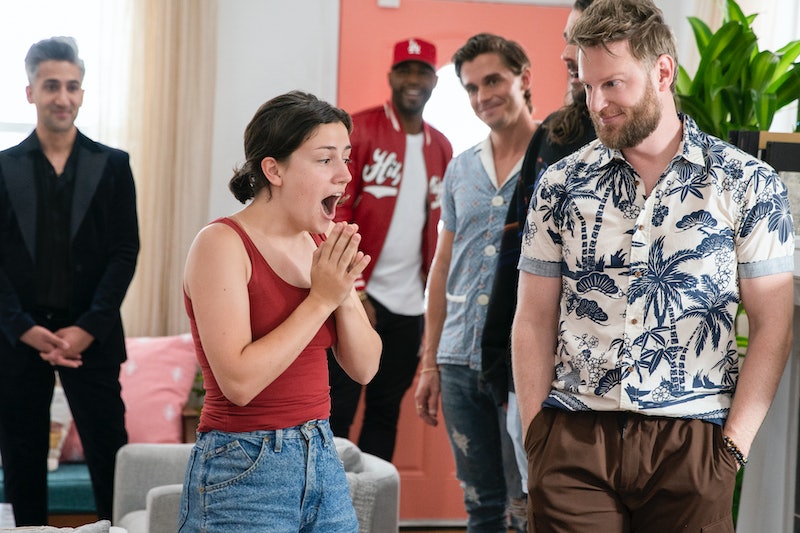 When the Fab Five met Queer Eye Season 5 hero Abby Leedy last August, Karamo Brown remarked that she was "18 going on 47." The newly graduated high schooler was so dedicated to combating climate change that she sometimes forgot to eat, let alone do any self-care. As Bobby Berk put it, their goal was to help her "know her worth and save the Earth." Now almost a year later, the "anxious activist" tells Bustle she's "definitely still learning" but has made a lot of progress.

One thing the Philadelphia native promised her parents at the end of the episode is that she'd set more of a boundary between her personal time and her work with the youth-led Sunrise Movement. In order to accomplish that, Abby, now 19, says she went to therapy, which she found "really helpful." She also started making sure she takes every Saturday off.

"I think something I took away from the show, especially in talking to councilwoman Helen Gym, is that if I want to keep doing this work long term I have to set myself up for that," she says. "It's a marathon, not a sprint."

Abby, who says she's been carving out "intentional space" to run with her mom, play card games, and do a lot of cathartic watercolor painting, recently decided to extend her post-high school gap year until 2021 before enrolling in college. In the meantime, she's continuing to work for the Sunrise Movement, now as a staff organizer on the direct actions team. She also moved out of the communal "movement house" featured in Queer Eye at the end of last year, but is still living with several fellow Sunrise staffers.

Since appearing on Queer Eye, one of Abby's proudest accomplishments has been spearheading training for a multiracial cross-class group of 50 high school students in direct action and organizing skills, culminating with a February summit in Washington D.C. More recently, she's been lending her voice to support the Green New Deal and the Black Lives Matter movement in the wake of George Floyd, Breonna Taylor, and Tony McDade's killings by police.

"When we invest millions of dollars into policing and racist systems that are actively harming communities of color, we're taking a lot of resources away from climate justice, so all of my work right now is about showing up for the movement for Black lives," Abby says.

Ultimately, the message Abby took away from Queer Eye is to be a little kinder to herself, but she hopes she'll inspire viewers to take action. "I do feel like last summer was a really helpful reset point for me," she says. "I'm hoping people watch the show and hear about my work and feel like they can get involved in something. There's always something they can do to make a difference."