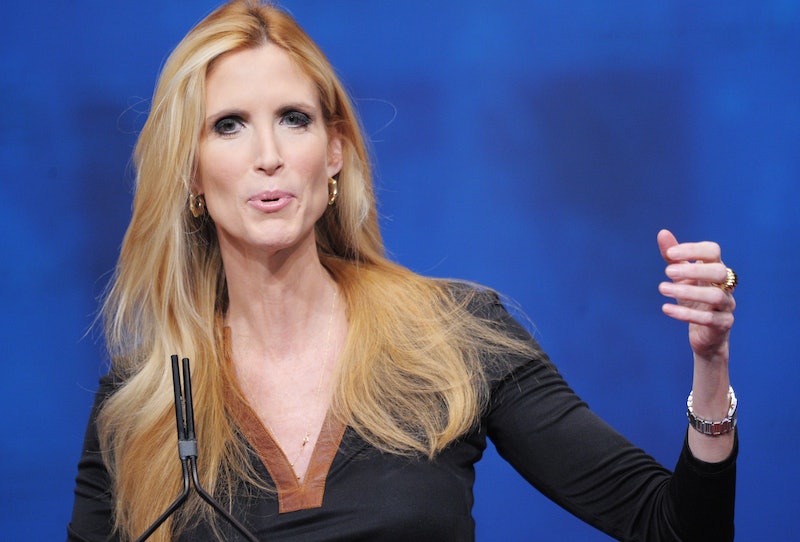 Most Americans know Ann Coulter as a conservative media pundit who’s never hesitated to put her bigotry on display. But as Impeachment: American Crime Story reminds us, her career in political commentary kicked off during Bill Clinton’s impeachment scandal. Coulter, who has a law degree, had worked for the Senate Judiciary Committee before leaving to become a litigator at the Center For Individual Rights. It was then that she got involved with Paula Jones’ 1994 sexual harassment lawsuit against Clinton.

Coulter was reportedly asked to help on the Jones case by her lawyer friend George Conway (yes, the same George Conway who’s married to former Donald Trump campaign manager Kellyanne Conway). She became an unpaid legal advisor on the case, and has explicitly stated that she came on board with the goal of “bringing down the president.” She has also claimed to be the person responsible for leaking Jones’ allegedly false description of Clinton’s penis to the press in an attempt to foster mistrust between Clinton and Jones’ lawyers and stop Jones from settling her lawsuit.

“[I thought] it might stall negotiations enough for me to get through to [Jones adviser] Susan Carpenter-McMillan to tell her that I thought settling would hurt Paula, that this would ruin her reputation, and that there were other lawyers working for her,” Coulter explained of the leak in a 1999 interview with the Hartford Courant.

At the same time, Coulter began gaining national prominence for her TV appearances, in which she spoke out against the Clinton administration. In 1996, she was hired as a legal correspondent by MSNBC. All of this led to Coulter writing her first book, the 1998 New York Times bestseller High Crimes and Misdemeanors: The Case Against Bill Clinton, in which she details a number of the controversies surrounding the then-president and makes an argument for his impeachment.

Coulter has since authored 13 books, including the 2018 bestseller Resistance Is Futile!: How the Trump-Hating Left Lost Its Collective Mind. Now in her 50s, she currently writes a weekly column that is published across a variety of conservative news outlets, as well as on her own website, and continues to make appearances on television and talk radio shows. She has been engaged several times but has never been married. Coulter was most recently in the news in early September, after she sent out a surprising tweet thanking President Joe Biden for deciding to end the U.S. war in Afghanistan and calling out Donald Trump’s failure to do so during his term in office.

More like this
Man Meets Politics: ‘Boy Meets World’ Star Ben Savage Is Running For Congress
By Jake Viswanath
Michael B. Jordan Tackled His "Public Breakup" With Lori Harvey On 'SNL'
By Brad Witter
Here’s What Happens To Bill & Frank In 'The Last Of Us' Video Game
By Brad Witter
Shonda Rhimes Responded To The Surprise Exit Of A Day 1 'Grey's Anatomy' Figure
By Grace Wehniainen
Get Even More From Bustle — Sign Up For The Newsletter
From hair trends to relationship advice, our daily newsletter has everything you need to sound like a person who’s on TikTok, even if you aren’t.