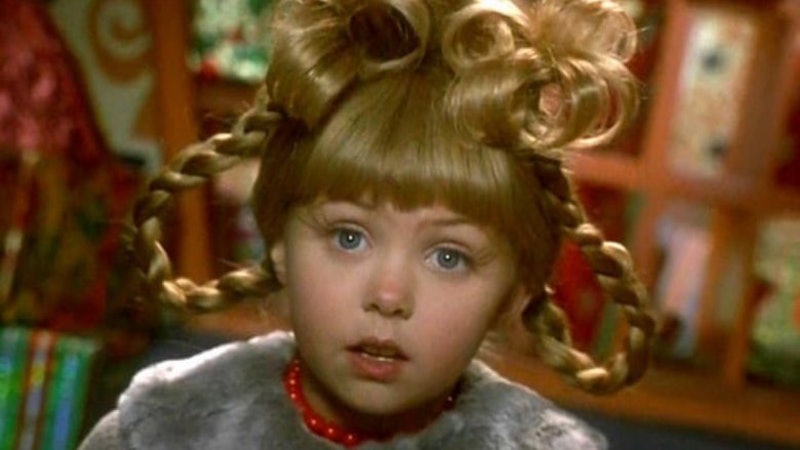 It's been 20 years since Cindy Lou Who peered out of her bedroom window and sang a delicate rendition of "Where Are You Christmas?" in the holiday classic How The Grinch Stole Christmas. But even though a lot of time has passed since the movie's release, fans will be delighted to know that Taylor Momsen — who was just seven years old when she played the character — is still singing.

The now-27-year-old actor's Instagram shows that she's pretty heavily focused on producing and performing music with her band, The Pretty Reckless. In fact, the group recently released their new single "25" along with its corresponding music video, which marks their first video in nearly four years. The Pretty Reckless is also getting ready to release their upcoming album, Death By Rock And Roll, early next year.

"THIS IS IT...the Album #DEATHBYROCKANDROLL will be released February 12, 2021," Momsen announced on Instagram in November. "After years of putting our blood sweat and tears into the recording I'm SO EXCITED for you all to hear it."

While her current rock and roll lifestyle may seem like a far cry from the sweet and innocent Cindy Lou Who, Momsen actually credits the film with inspiring her love of music. "The Grinch was the first time I went into a recording studio," she told Today in a recent interview. "I'll never forget walking into this beautiful studio with a massive console in front of me and putting headphones on and singing into a microphone for the first time... It was such an impactful moment in my life. It made me go, I want to make music for the rest of my life. I love being in a recording studio."

Momsen also revealed that she has nothing but fond memories from the set. In addition to going to "Who School" with her costars to learn how to pull off those Seussian stunts, Momsen recalled working with Jim Carrey, who played the titular role. "I just remember he was so kind, so concerned but so methodical with what he was doing," she said. "Even at that young of an age, I remember watching him and thinking, 'I'm watching an artist at work.'"

The singer followed up her performance as Cindy Lou Who with another popular character: in 2007, she began starring as Jenny Humphrey in Gossip Girl. Momsen played "Little J" for four seasons (her character moved to London in Season 5 and only returned for the finale in 2012), and the character's transformation from preppy princess to grunge fashion icon was heavily influenced by the actor's own burgeoning music career. Shortly after Momsen left the show to devote herself to The Pretty Reckless full-time, the band became the first female-fronted group to have two No. 1 singles on the rock radio charts.

Even still, Momsen continues to gets recognized as Cindy Lou Who, and she told Today that it brings back happy memories whenever it happens. "It's certainly funny now when people don't realize I played Cindy Lou Who, and they might know me from my music or something. [When] they put two and two together, you get the giant reaction of 'I can't believe that's the same girl from How the Grinch Stole Christmas!' And I get a huge kick out of that," she said. "I grew up, but I think deep down I've still got a lot of Cindy Lou Who in me."

More like this
Craig David Is Still Slicker Than Your Average
By Olivia-Anne Cleary
The Spice Girls Just Dropped A Brand New Music Video
By Sam Ramsden
Everything To Know About Taylor Swift’s 10th Studio Album, 'Midnights'
By Grace Wehniainen and Jake Viswanath
The 'Skins' Cast Shared The Reunion We’ve Been Waiting For
By Sophie McEvoy
Get Even More From Bustle — Sign Up For The Newsletter