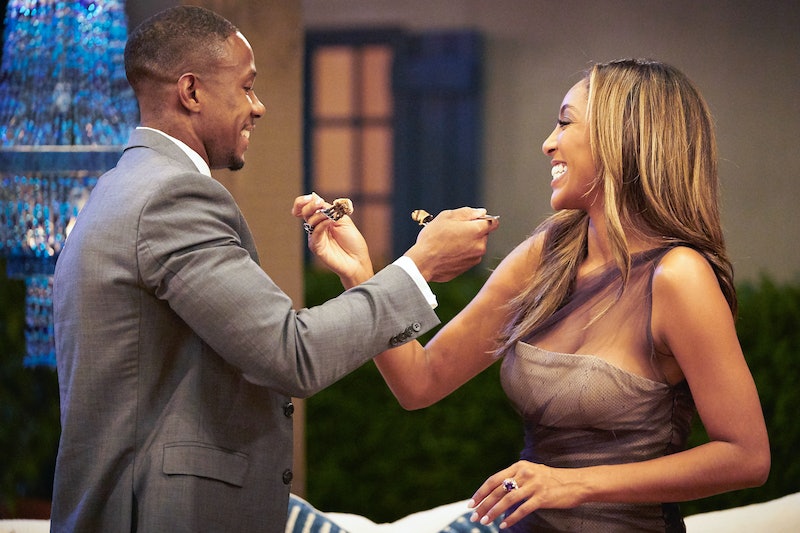 Even amid all the Noah drama on The Bachelorette, Riley has managed to charm fans with his relatable expressions and subtle but sweet gestures. He gave Tayshia a cute "one week-iversary" cake, willingly drank cow intestines for her (bless him), and last week opened up about his relationship with his mom. He seems like a frontrunner for Tayshia's heart, but the Week 9 promo hints that Riley could be going home early.

In the short clip, Riley reveals that he's been hiding something. "I have a little bit of explaining to do. She has no idea," he says. It's unclear what his secret could be, but if Tayshia saying, "Oh my, what in the actual hell?" is about Riley, it's potentially a big one. The promo even suggests he may eliminate himself, as he says, "Is today the day I let myself go?" The scene then cuts to a silhouette of two people hugging and crying. Is it possible that's Tayshia saying goodbye to Riley after he suddenly decides to leave the show?

Of course, promos tend to be a little misleading, and Tayshia's tears may be completely unrelated to Riley. (In fact, they're more likely due to Zac, who admits in the promo that he's cheated in the past.) Riley's secret may also be relatively benign, as Tayshia has already learned about substance misuse and DUIs from the other contestants.

As expected, Riley's Instagram doesn't give many hints about his future on the show. The Bachelorette wrapped filming on Sept. 1, and on Sept. 3 he posted a cheerful picture on Instagram with the caption, "Gotta keep that smile." On Sept. 17, he posted yet another happy photo with the caption, "Been smiling a lot these days, and I‘m about it." Both posts could be interpreted as him getting over heartbreak or finally finding love, so read into them what you will.

Regardless of what happens on The Bachelorette, Riley is clearly keeping in high spirits. Aside from gracing the world with his smile, it looks he's mostly been social distancing and encouraging people to wear masks. He can be spotted flexing in the park, and has also posted some sweet tributes to his friends and his mom. "I wonder if you knew the paths our lives would take when you took this picture," he wrote under a photo of his mom. "I wonder if you knew of the sacrifices that you’d have to make. I can only imagine the strength it took to endure the things that you did. I thank you for the sacrifices I never knew you made. And you should know, that I am truly my mother’s son and I get all my strength from you."

More like this
Here's What Happened After Rachel & Aven Left The 'After The Final Rose' Stage
By Grace Wehniainen
Here's Exactly When Rachel & Tino's Fight Happened After 'The Bachelorette'
By Grace Wehniainen
Erich Addressed His Text Message Scandal & Twitter Is Divided
By Kadin Burnett
Where Is Former Bachelor Host Chris Harrison Now & What Is His Net Worth?
By Hugh McIntyre
Get Even More From Bustle — Sign Up For The Newsletter