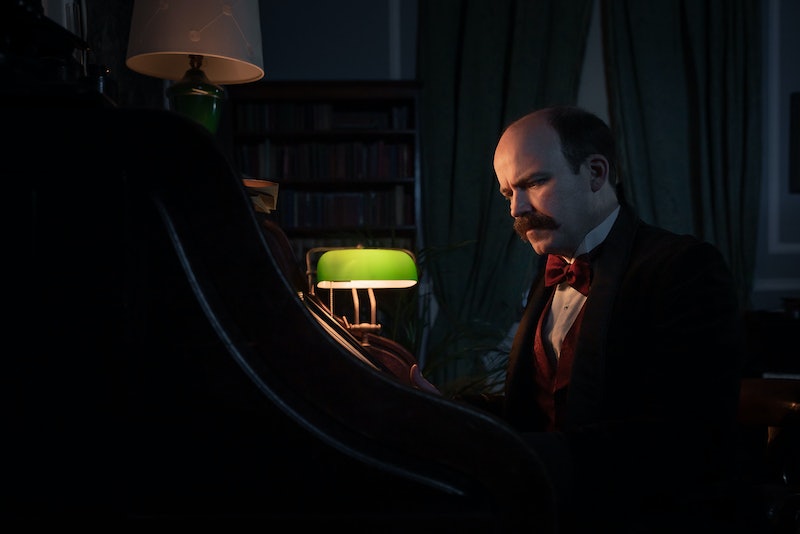 The BBC is bringing to life a ghost story for Christmas with an adaptation of M. R. James’ 1904 short story The Mezzotint. Airing on Christmas Eve, the 30-minute special is the perfect spooky treat to accompany the winter chill.

Gatiss told the BBC, “It's delightful to be bringing a little seasonal unease to the nation once again and this famous M. R. James story is just the ticket.” So while you wait for this chilling winter’s tale to premiere, read on to find out more about how the original story pans out — and more importantly, what on earth a mezzotint is.

Edward Williams is an unassuming lecturer whose job is to acquire prints of buildings for the university library. Seems simple enough, until one day he is sent a mezzotint (a print made using a copper plate) of an 18th-century country house. Aside from the three-letter initials A.W.F., the print’s origin is unidentifiable — and Williams soon casts it off as useless.

However, what starts as a rather dry business negotiation to sell the print quickly turns sinister. The first hint of something nefarious being afoot is Williams spots something he hadn’t seen before — a cloaked wrapped figure facing the house. Only a few hours later, the figure has moved to all fours, crawling toward the house.

Soon Williams enlists his friends Nisbet and Garwood to keep track of the horrifying figure as it moves through the lawn and into the house. Perhaps the most chilling moment is when a new stranger observes the figure — skeleton-like in appearance — crawling out of the house with a half-alive child draped in its arms.

As the three friends frantically search to find the location of the house, they finally discover it is called Anningley Hall and that the story behind the family home is dark and twisted. When Arthur Francis, the father of the house, caught a poacher named Gawdy on his land, the resulting mayhem led to Gawdy being tried and sentenced to death. As the last surviving member of his family, with his death came the end of his family line. In vengeance, Gawdy’s ghost murdered Arthur’s infant son, and in doing so made him feel the pain of being the last surviving member of his family. Arthur died three years later.

With the mystery unravelled, the trio never truly understand how or why the figures stirred on this fated image, but they never arose again...

More like this
Everything To Know About The 'Daisy Jones & The Six' TV Series
By Maxine Harrison and Brad Witter
Your Guide To Watching 'Everything Everywhere All At Once' In The UK
By El Hunt and Sophie McEvoy
The Banned 'Friends' Ad Shows Monica As You’ve Never Seen Her Before
By Sam Ramsden
Con O'Neill Was Connected With Sarah Lancashire Long Before 'Happy Valley'
By El Hunt
Get The Very Best Of Bustle/UK
Sign up for Bustle UK's twice-weekly newsletter, featuring the latest must-watch TV, moving personal stories, and expert advice on the hottest viral buys.