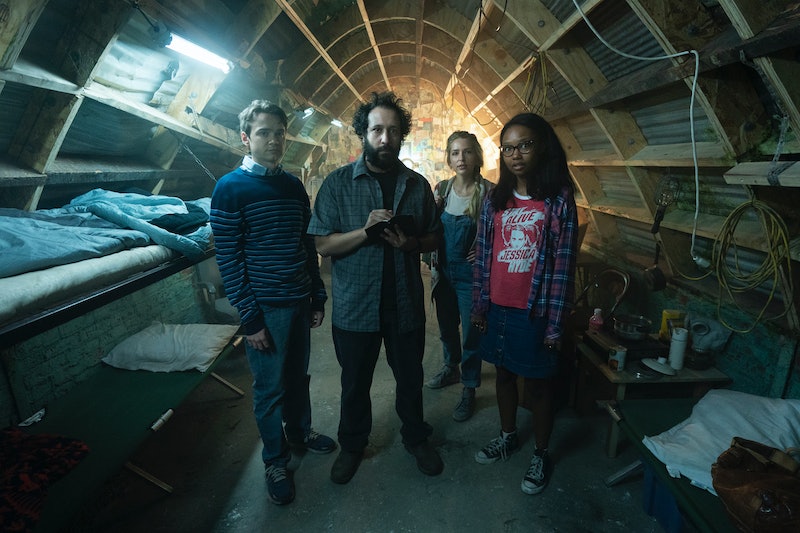 Gillian Flynn's Utopia is a twisted conspiracy thriller at its core. Centered on a group of fans obsessed with dissecting the comic book called Utopia, their lives are upended when they discover Utopia's pages actually predict future epidemics — putting them in the crosshairs of the bioterrorist Mr. Rabbit. While it would seem that Utopia might be based on an actual comic, Utopia is based on a 2013 British show by Dennis Kelly, though the two versions ultimately tell very different stories.

While Flynn's show is a pretty tension-inducing, realistic thriller, Kelly's Utopia was more of a black comedy show that aired on Channel 4 from January 2013 to August 2014. In Kelly's version, Utopia revolved around a high-level government conspiracy to solve overpopulation by employing secret sterilization methods. Its surreal tone and outlandish plot struck a chord with viewers, and though the show was canceled after two seasons, it ended up gaining a cult following.

In an interview with Channel 4, Kelly explained that production company Kudos approached him about making the series. "Kudos came to me with an idea, and it was about a conspiracy hidden inside a graphic novel," he explained. "It was very embryonic, and a bit more comic-book. I think the conspiracy was quite ‘illuminati.' What I really liked was the idea of this thing that just randomly happened to get hidden in a graphic novel."

While Kelly said he's not exactly a big fan of graphic novels, that germ of an idea fascinated him for other reasons. "What I do like is a conspiracy. I never believe in any of them, but I like them from an aesthetic point of view," he explained. "It amazes me that people genuinely believe that the moon landings didn't happen. It's incredible how many people believe that. Fiction and fact have become strangely blended in all sorts of ways."

Ultimately Kelly's Utopia didn't bring in enough viewers, and the series was canceled. It was Gone Girl director David Fincher who eventually introduced author Gillian Flynn to the property, and they saw an opportunity to adapt Kelly's work for American audiences. Though HBO passed on the series and Fincher's busy schedule pulled him off the project, Flynn continued to work on the script for six years until it found a home at Amazon Prime Video.

"I spoke to [Flynn] and saw some of the scripts," Kelly told The New Zealand Herald in 2017. "They were brilliant. There were bits of it I was really jealous of. They changed it, but in a really smart way."

As befitting of the Sharp Objects and Dark Places author, Flynn's version features a lot of startling violence and morally grey women, particularly the brutal Utopia protagonist Jessica Hyde (Sasha Lane). And the threats in Flynn's universe are all too prescient: concerns over a widely spreading pandemic and mass shootings fill many episodes. The big bad here isn't a government bent on curbing population growth, but an organization trying to end humanity with a virus that spreads through animals.

"Dennis Kelly’s version is really sleek. It’s really poppy. It’s just its own particular world. I really wanted to do my own version of it," Flynn explained to Rolling Stone. "I wanted it to feel very, very realistic."

Though Flynn's work has obvious callbacks to Kelly's story, Kelly told Den of Geek that ultimately he gave Flynn his blessing to interpret Utopia in her own way. "She obviously wanted to make it her own. She was always really lovely to me, but I felt like the last thing you want is ‘that bloke’ hanging around going, ‘do it like this,'" Kelly said. "She’s making her show, even though some of the ideas might be taken from mine, it’s her show and if it were me, I wouldn’t want someone else to be around. I stepped back and let her do her thing."

More like this
A 'Terminal List' Sequel & Spinoff Are Reportedly In The Works
By Kadin Burnett and Grace Wehniainen
Everything To Know About The 'Daisy Jones & The Six' TV Series
By Maxine Harrison and Brad Witter
Netflix Shut Down 'Bridgerton' S3 Rumours About A “Very Dark” Storyline
By Bustle
Bill & Frank’s 'The Last Of Us' Episode Has Twitter Emotionally Wrecked
By Alyssa Lapid
Get Even More From Bustle — Sign Up For The Newsletter
From hair trends to relationship advice, our daily newsletter has everything you need to sound like a person who’s on TikTok, even if you aren’t.