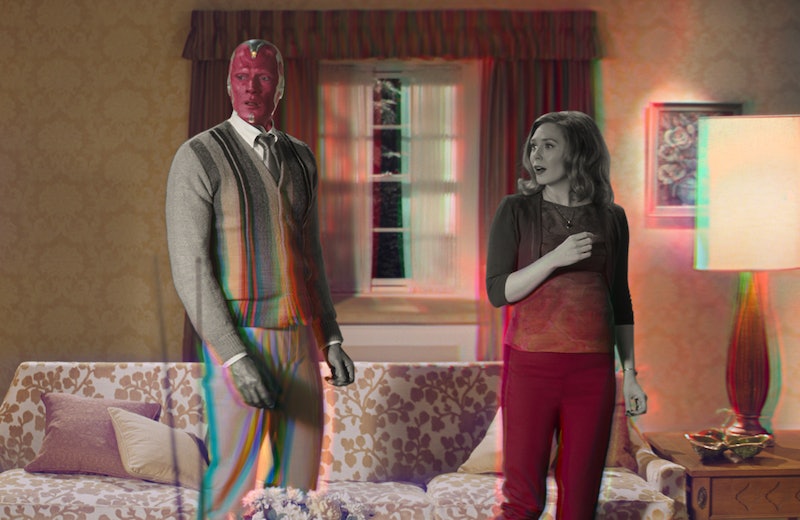 We're mere days away from the long-awaited release of Disney+'s WandaVision, and it's still unclear what exactly the show is about. We know that it takes place after Thanos' defeat and follows Scarlet Witch, aka Wanda Maximoff (Elizabeth Olsen), and Vision (Paul Bettany) as they live an idealized suburban life together. But there are just a few problems: Thanos killed Vision in Infinity War; Wanda is a powerful psionic superhero, not a 1950s housewife; and their home seems to be situated in a glitching and ever-shifting TV land. So what's going on?

At its core, WandaVision is a show that sets up the next phase of the Marvel Cinematic Universe (MCU). It was first announced at the D23 2019 expo, where executive producer Kevin Feige described it as "half ’60s sitcom, half MCU spectacular inspired by The Dick van Dyke Show." Variety reports that the events of WandaVision will tie directly into Doctor Strange in the Multiverse of Madness, an ominously titled upcoming film that also stars Olsen. And according to ScreenRant, we know that WandaVision introduces Teyonah Parris as an adult Monica Rambeau (the kid in Captain Marvel) who seems to be working for an otherworldly defense organization, maybe even with Nick Fury. From all of that, we can assume that whatever happens in WandaVision has potentially dire consequences for time, space, and even reality itself.

Based on the trailers, WandaVision is likely an exploration of how poorly Wanda is coping with Vision's death, perhaps creating a cheerful fake reality as a result. In one trailer, Wanda tells a somehow alive Vision, "This is our home now" as she magics them to look like a black-and-white I Love Lucy couple. Kathryn Hahn's mysterious "Nosy Neighbor" reminds Vision he's dead, which seems to shock him. That same neighbor asks why they don't have kids, and in the next shot they're suddenly dancing with twin sons. Eventually, we see Monica sucked into what appears to be Wanda's bubbled reality. Like Vision, Monica can't seem to remember who she is once inside. And a brief glitch shows that Wanda and Vision's "house" may just be a hollow structure in the middle of nowhere.

It's all very strange, but these events have a basis in the comics. In issues published in the 1970s, Wanda and Vision did fall in love and temporarily left the Avengers to enjoy suburbia together. Under the guidance of a witch named Agatha Harkness — the likely identity of Hahn's character — Wanda even learned how to magically create twin sons, Billy and Tommy. (The procedure involved using shards from the demon Mephisto, who fans believe could be the villain in Doctor Strange in the Multiverse of Madness or Spider-Man 3).

They were all a happy family for a while, but Wanda's mental health started to deteriorate after a complicated series of events. (It's a lot, but among other things: she and Vision broke up, he died, and their children disappeared after she finally acknowledged they weren't real.) Then in House of M, Agatha wiped Wanda's memory to save her from the pain. But that just led to Wanda creating a whole new, terrible reality to try and bring her sons back. After a ton of bloodshed, the Avengers eventually righted everything. Wanda left the team for a while, Billy and Tommy were reincarnated as real boys (unrelated to one another), and they went on to lead the reality-hopping Young Avengers team with Miss America.

Clearly there are threads of all those stories in WandaVision. Miss America is in Doctor Strange 2, so WandaVision is likely the start of an eventual Young Avengers film. In the comics, it was Billy and Tommy's deaths that led to Wanda busting open the multiverse, but in WandaVision it's likely Vision's death that triggers it. We also know that Disney now owns the rights to the X-Men, which played a major role in the House of M storyline. Is it possible Wanda opens up the multiverse in an attempt to bring Vision back, and that's how the X-Men are incorporated into the MCU? It's unclear, but it seems like behind all the cute sitcom references, WandaVision is really a story about Wanda's grief.

More like this
Louisa Harland’s New Show Is A Far Cry From Derry Girls
By Frances Stewart
Spencer Matthews Will Search For His Brother In A New Disney+ Doc
By Darshita Goyal
The 'Andor' Timeline, Explained
By Gretchen Smail
Twitter Is Pouring Out Some Zhampagne As ‘Schitt’s Creek’ Leaves Netflix
By Brad Witter
Get Even More From Bustle — Sign Up For The Newsletter