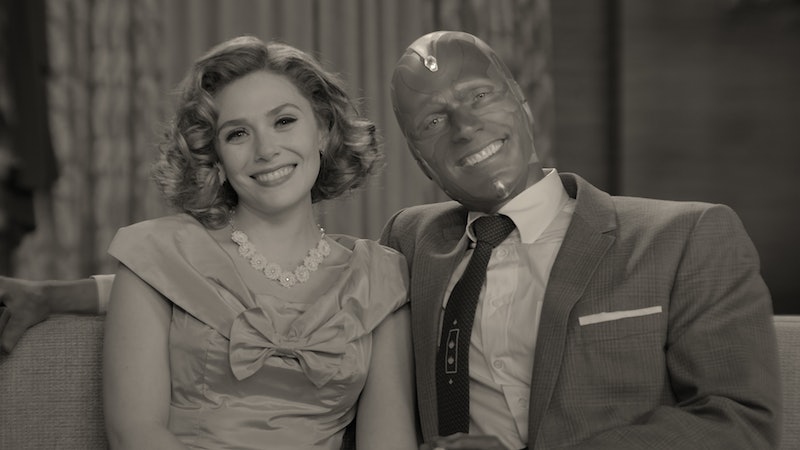 WandaVision is, to put it mildly, a confusing show. The new Disney+ series ostensibly follows the relationship between MCU couple Wanda Maximoff (Elizabeth Olsen) and Vision (Paul Bettany), whose on-screen love story has mostly unfolded through brief, intimate moments amid intergalactic battles. WandaVision finally puts them front and center — albeit far outside of their usual world. At the start of the show, they’re living in what appears to be a ‘50s sitcom while trying to hide their superpowers from the townspeople in their new home of Westview. As in any sitcom, quirky hijinks ensue.

“We get to see them doing dishes and in the kitchen and being cute, just all the homebody stuff that you would never get to see a superhero participate in,” writer and producer Jac Schaeffer explains. “In WandaVision, it’s a lot of cute cute — until it’s not.”

For fans of the Marvel movies, it’s immediately apparent that things aren’t as blissful as they seem — most notably because WandaVision takes place after the events of Avengers: Infinity War, in which Vision was destroyed by Thanos and never re-formed. So is Vision really still alive somehow? Has Wanda created this reality as a means to cope with his loss? Or has she been trapped there by some outside entity?

Unfortunately, the WandaVision cast can’t really tell you. “I would describe [WandaVision] as a love story. A newlywed couple moves to a new town and they are trying to fit in as best they can,” says Kathryn Hahn, who plays Wanda and Vision’s nosy neighbor Agnes (and is speculated to actually be the powerful witch Agatha Harkness). Teyonah Parris, who has been announced to be playing Monica Rambeau but introduces herself on the show as "Geraldine," is similarly vague, explaining that Wanda and Vision are “in what seems to be a very idyllic world, until little things start happening to suggest maybe otherwise.”

Throughout its first season, the series takes viewers through different decades of American sitcoms, drawing inspiration from classics like I Love Lucy, The Mary Tyler Moore Show, and Bewitched. But one of the biggest questions fans have had is: why? “I feel like what the sitcom has always represented is this kind of aspirational view. The structure of the sitcom — which is like, the set-up, the misunderstanding, and the resolution — is [so] comfortable and comforting,” Hahn says. What better way to hide Westview’s dark secrets than within the disarming warmth of TV suburbia?

Whatever mysteries are to be found there, Hahn can at least tell you one thing: “[WandaVision is] unlike anything the MCU has ever done before.”

More like this
Netflix Shut Down 'Bridgerton' S3 Rumours About A “Very Dark” Storyline
By Bustle
Bill & Frank’s 'The Last Of Us' Episode Has Twitter Emotionally Wrecked
By Alyssa Lapid
'The Queen’s Gambit' Season 2 Tweet Wasn’t From Anya Taylor-Joy
By Mary Kate McGrath, Jack Irvin and Grace Wehniainen
Everything To Know About 'RHONY' Season 14
By Jake Viswanath, Alyssa Lapid and Brad Witter
Get Even More From Bustle — Sign Up For The Newsletter
From hair trends to relationship advice, our daily newsletter has everything you need to sound like a person who’s on TikTok, even if you aren’t.