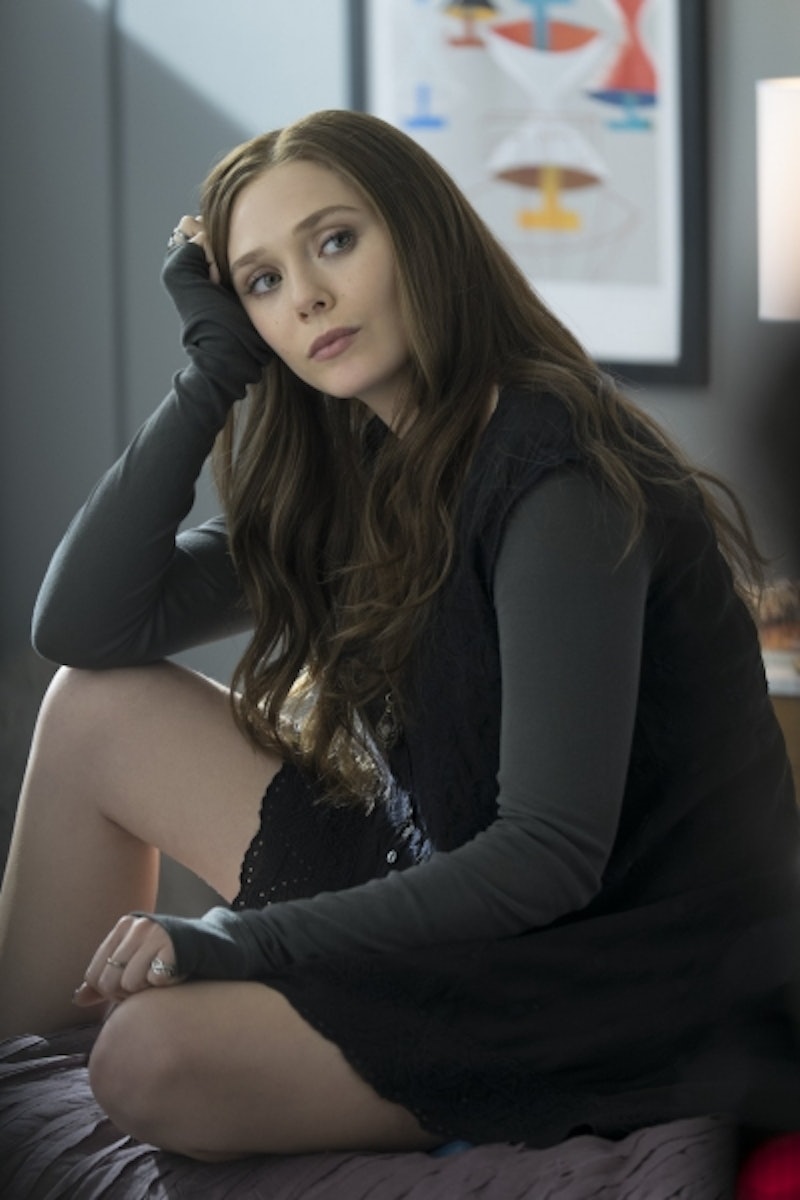 A lot of attention has been paid to all the fighting going on in Marvel's newest film, Captain America: Civil War. Iron Man against Captain America, Black Widow against Hawkeye, Ant-Man against Spider-Man, blah blah blah. But where is all the romance? OK, stay with me here. I know that Marvel movies aren't known for their love stories, but fans of the comics can definitely see the potential for one in Civil War when it comes to the classic couple, Vision and Scarlet Witch. People want to know if Vision and Scarlet Witch are together in Civil War, and not every fan is gonna like the answer. Spoilers ahead!

The short answer is no, you're not going to see those two character lock lips or anything like that in the film. However, the movie makes it pretty clear that there are some feelings between Vision and Scarlet Witch, and shippers of these two will probably come away with some hope of a relationship somewhere down the line. Now if this sounds shocking to you and you're wondering why Wanda Maximoff would be interested in forming a relationship with an android — someone who's not even human — then allow me to go over a little bit of the history of Scarlet Witch and the Vision from the pages of Marvel Comics.

In the comics, Scarlet Witch and Vision fall in love with each other in the early '70s, while both are members of the Avengers. The two become married in Giant-Size Avengers #4 in 1975. They then starred in their own limited series together in the '80s, The Vision and the Scarlet Witch, and during this time Wanda gives birth to twins — Vision is considered the father, but since he's a robot, she actually conceived the children using magic. After a good two decade run, things start to go awry in the '90s for the couple. The Vision is nearly destroyed and rebuilt with no emotion, Wanda learns her children are actually shards of a demon and they disappear, Wanda breaks up with Vision and starts dating Wonder Man (whom Vision's original brain patterns were modeled after), but then eventually reunites with her ex-husband. Finally, an overpowered Wanda goes insane trying to bring her children back, and kills Vision in the process.

Clearly, things get a little complicated (OK, a lot complicated) and the movie is unlikely to pursue all aspects of their relationship, but a relationship does seem likely. In Civil War, Vision phases into Scarlet Witch's room to visit, and she lightly chastises him by asking him to use the door. He seems embarrassed, and it's clear that he wants to spend time with her, even though he's still trying to figure out this whole "human" thing. She also calls him "Viz", a cute little pet name. Later in the film, Vision tries cooking Wanda a meal from her homeland in Sokovia in an attempt to lift her spirits. He's trying to understand the concept of feelings, and it's clear that he is developing feelings of his own for Wanda — even if he doesn't know it.

The two mostly bond over both of them being outcasts in the group — they're the two most powerful members with the most questions about their abilities — and over each of them deriving their powers from the same source; the Mind Stone. However, their relationship hits a bump when Vision overreaches his boundaries and refuses to let Wanda leave the Avengers compound under Stark's orders. He is concerned for her safety, but she desires her freedom and attacks him; leaving him behind. Later, they find themselves on opposite sides in the Airport Battle as she is on Team Cap and he is on Team Iron Man, but they don't fight each other. Vision actually becomes so distracted that Wanda might get hurt in the battle that he inadvertently almost kills his own teammate, War Machine. Then after the fight, Vision and Scarlet Witch apologize to each other in a heartfelt way, making it clear that they are very important to one another.

So even though Vision and Scarlet Witch aren't romantically involved in Civil War, the movie definitely lays the foundation for a relationship by making clear their complicated feelings for one another. So who knows? Maybe by the time Infinity War rolls around, these two could be magically conceiving some demonic children! Fans can only hope.