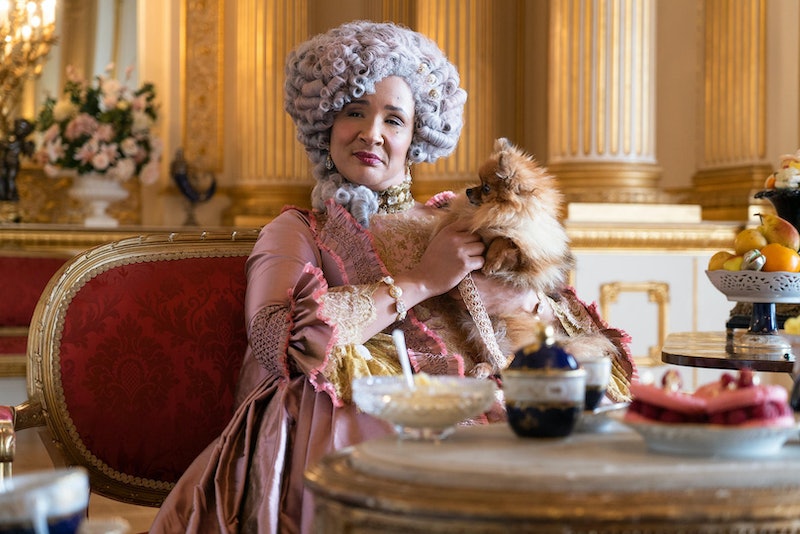 Fans know that Bridgerton sometimes plays fast and loose with historical accuracy, but a lot of the series is based in fact — including Queen Charlotte’s curious habit in Season 2. Here’s what Queen Charlotte is snorting on Bridgerton, and what you need to know about snuff at the turn of the 19th century. Spoilers for Bridgerton follow.

If you were confused by Queen Charlotte’s sniffing scene, in which the monarch uses a tiny spoon to dispense some powder on the side of her hand before snorting it up, you aren’t alone. Bridgerton fans quickly took to Twitter to ask what the mystery substance was. In a season that sees Colin and Benedict partake in continental drugs ahead of an important family dinner, all bets are off, right?

We’re very sorry to disappoint you, but Queen Charlotte was not snorting anything illegal at her fancy garden parties, despite some websites’ suggestions to the contrary. Instead, she was using snuff: a form of finely ground tobacco that’s ingested by snorting it up the nose. (Another variety, moist snuff, is held in the cheek.) Given the proliferation of mixed-gender spaces in the latter half of the 17th century, it was no longer considered polite to smoke tobacco in public during the Regency era, despite the practice’s previous popularity. And so snuff, which did not have any smoke or odors that might offend one’s conversation partner, became the tobacco product of choice.

That’s not to say that snuff use was universally celebrated in Regency England, however. In her 2016 book, Reading Smell in Eighteenth-Century Fiction, Auburn University’s Emily C. Friedman notes that entertainment media of the day depicted snuff as an unflattering habit for women, with one female snuff-user shown “with large hands [and]... a large tankard of beer,” and another described as “slatternly and dirty to an excess,” with her messy tobacco powder adding “a great addition of filthiness.” Young men who used snuff were not without fault, either. Friedman writes of one young woman’s letter to the Gentleman’s Magazine in 1731, which describes her suitors as having “a Nose full of Snuff, and a Head full of — Nothing [sic].”

Even Queen Charlotte was not safe from such slights. She “was famously nicknamed ‘Snuffy Charlotte’ for her addiction to snuff-taking,” according to Friedman. So if you encounter any viewers taking umbrage with Bridgerton’s depictions of Queen Charlotte’s tobacco use, feel free to remind them that they’re actually historically accurate, if provocative.

Although Queen Charlotte didn’t use cocaine, the same cannot be said for her granddaughter, Queen Victoria. Spain’s colonial expansion, which began in the 15th century, eventually led to the Catholic Church’s cultivation of coca: the South American plant from which cocaine is derived. By the mid-19th century, coca leaf was a popular ingredient in various medicinal and recreational beverages, and no less than Queen Victoria and the Pope were fans. And although we may find their drug use shocking today, it’s hardly surprising, given that at the time, over-the-counter cough syrup “contained alcohol, cannabis, chloroform, and morphine.”

And don’t worry, Bridgerton showrunners didn’t put their Queen Charlotte’s health at risk. Actress Golda Rosheuvel told Today that the on-set “snuff” was made primarily of glucose. Noting that she had a “wild sugar rush” by the end of taping, the actress assured her fans: “It’s harmless, it’s fine. Absolutely harmless.”

More like this
'The Summer I Turned Pretty' Book Ending Is An Emotional Rollercoaster
By K.W. Colyard
Julie Andrews Revealed A Surprising Behind-The-Scenes 'Bridgerton' Detail
By Grace Wehniainen
Regé-Jean Page Spoke Out On His Rumoured 'Bridgerton' Return
By El Hunt and Maxine Harrison
At 14, Jenny Han Wrote Rom-Coms About Her Friends & Fan Mail To Leo DiCaprio
By Alyssa Lapid
Get Even More From Bustle — Sign Up For The Newsletter