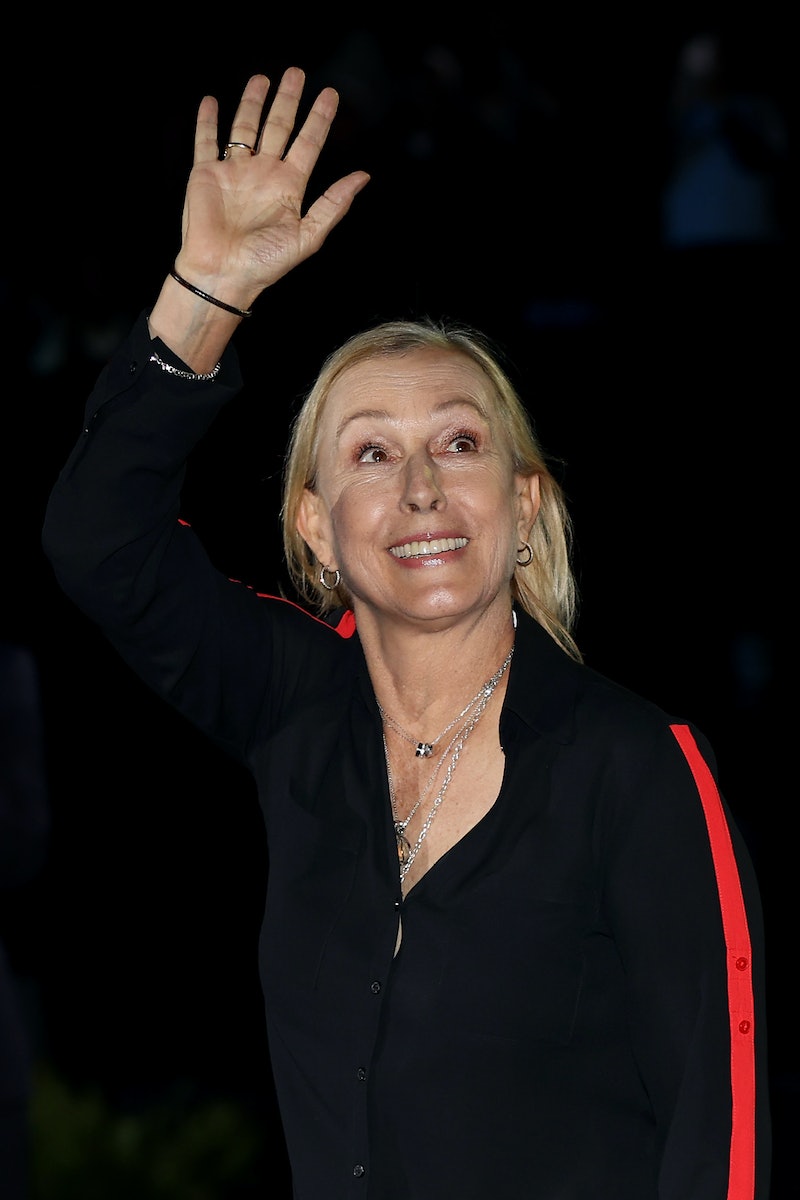 Julia Lemigova may be making history as the first LGBTQ+ Housewife in the Real Housewives franchise, but her wife, Martina Navratilova, is also no stranger to the spotlight. Navratilova, who will appear alongside Lemigova on Season 4 of Real Housewives of Miami, is an athlete who rose to fame in the 1980s and is widely considered one of the greatest tennis players of all time. Over a career that spanned four decades, Navratilova won 59 Grand Slam titles, including nine Wimbledon singles championships, 167 singles, and 177 doubles championships.

Per ESPN, Navratilova was born on Oct. 8, 1956, in Prague in Czechoslovakia. At 4 years old, she began hitting a tennis ball at a cement wall, and by age 7, she was playing the game. By 15, Navratilova had won the Czech national championship. In 1973, at 16, she turned pro and competed in the United States. In her autobiography, Navratilova wrote that competing in America was the first time she was able to see the country “without the filter of a Communist education, Communist propaganda.” She added that she honestly believed she was born to be American: “With all due respect to my homeland, things never really felt right until the day I got off the plane in Florida.”

When her home country began to criticize her for being too Americanized, Navratilova decided to defect. After losing to her good friend Chris Evert in the semifinals of the 1975 U.S. Open, the then 18-year-old Navratilova went to the offices of the Immigration and Naturalizations Service and asked for political asylum. “I felt if I didn’t get out, I could not become the best player in the world,” she said at a news conference, per the Lewiston Morning Tribune. “Politics had nothing to do with my decision. It was strictly a tennis matter.”

Navratilova continued to make name for herself after becoming a U.S. citizen. She was named Women Tennis Association’s Tour Player of the Year seven times, the Associated Press’ Female Athlete of the Year, and one of the Top 40 athletes of all time by Sports Illustrated. She was inducted into the International Tennis Hall of Fame in 2000 and officially left the tour circuit in 2006 as she approached her 50th birthday.

She wasn’t just famous for her skill on the court though. Navratilova also broke boundaries as one of the few openly queer women in the sport. In July 1981, after receiving her U.S. citizenship, Navratilova told reporters she was actually bisexual and later identified as a lesbian. (She was initially outed without consent, though, in what she once described as a “gay witch hunt.”)

“Martina was the first legitimate superstar who literally came out while she was a superstar,” Donna Lopiano, executive director of the Women’s Sports Foundation, told ESPN. “She exploded the barrier by putting it on the table. She basically said, ‘This part of my life doesn’t have anything to do with me as a tennis player. Judge me for who I am.’”

Navratilova met Lemigova in 2000. But they didn’t really have a date until they reunited again years later. “We met for the really first time in 2000. But then our lives kind of drifted apart and we didn't see each other for eight years until Paris,” Lemigova told E! News. “I already had my two little daughters and I asked Martina, ‘Would you like to have a breakfast?’ Eight years later and she said, ‘I sure would.’ So we have a breakfast, and then the next day we had another breakfast, and the third day we had another breakfast, and we never separated since. We’ve been together now since 2008.” Navratilova proposed to Lemigova at the U.S. Open tennis championships in 2014 while she was doing commentary for the men’s matches.

Since her retirement, Navratilova has become known for her largely outspoken and progressive politics, including her support for gay marriage, Black Lives Matter, and vaccines. (But controversially, she’s also consistently affirmed that she thinks trans women should not be allowed to play in women’s sports.) She currently lives in Miami with Lemigova, their two daughters, and an assortment of animals on their small family farm. She’s a regular BBC commentator during tennis matches, and in 2018, Reese Witherspoon announced she was producing a documentary about Navratilova’s life.