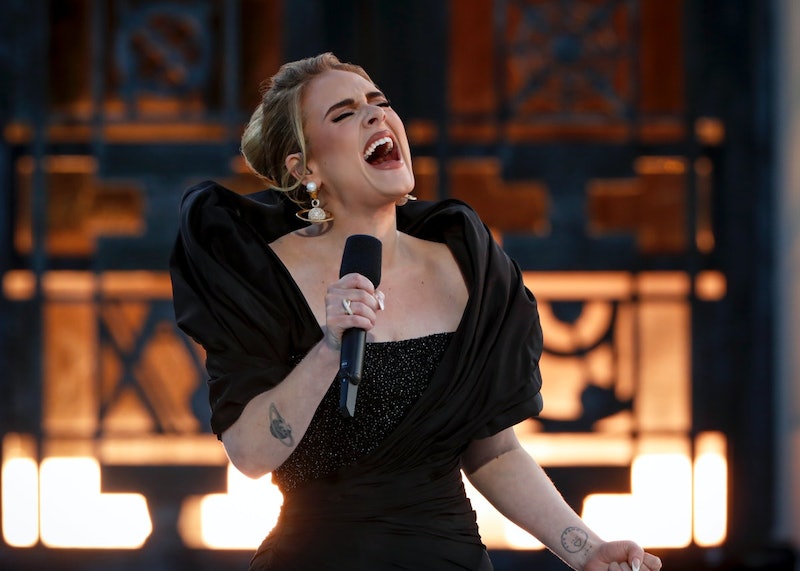 As the release of Adele’s new album 30 edges ever closer (Nov. 19, just FYI), the Grammy-winning singer-songwriter performed some of her new material for a CBS special, Adele: One Night Only, on Sunday, Nov. 14. The two-hour special also saw the star sit down for an exclusive interview with Oprah Winfrey, where she shared the inspirations behind her soul-baring songs; from her turbulent divorce to ex-husband Simon Konecki to her relationship with her son Angelo.

Adele performed the emotional ballad “Hold On” from the upcoming album to a crowd of celebrities at the Los Angeles' Griffith Observatory on Sunday. Oprah praised the song — which details Adele feeling “such a mess” and being her “own worst enemy” — for having “brutally honest” lyrics.

“That song is going the national anthem throughout the world for anyone struggling through something,” Winfrey said on the CBS Morning show.

Speaking to Oprah Winfrey during her interview in the rose garden, the “Easy On Me” singer explained that “Hold On” was based on the advice given to her by her friends during the most difficult period of her divorce.

“My friends would tell me to hold on when I would feel like the lyrics in the verse. But it was just exhausting trying to keep going with it,” she said.

“It’s [dealing with] the process of a divorce. It’s the process of becoming a single parent. The process of not seeing your child every single day. [That] wasn’t really a plan that I had when I became a mum,” she continued.

Adele had already confirmed that the new album is about “divorce babe, divorce” as she exclaimed on that Instagram Live last month, and from listening to the powerful and poetic lyrics of “Hold On”, it’s clear that she had an emotional reckoning during her separation.

As she explained to Oprah, she grew tired of “turning up for yourself every single day.”

“It made my feet hurt walking through all of that concrete,” said Adele.

The Oprah Winfrey interview isn’t the first time the singer has been candid about her divorce and its impact on her new music, as last month Adele told British Vogue, “I feel like this album is self-destruction, then self-reflection, and then sort of self-redemption. But I feel ready. I really want people to hear my side of the story this time.”

Take a look at the full lyrics for “Hold On” below.

Oh, what have I done yet again?

Have I not learned anything?I don't want to live in chaos

It's like a ride that I want to get off

It's hard to hold onto who I am

When I'm stumbling in the dark for a hand

I am so tired of battling with myself, with no chance to win

You are still strong

I swear to God, I am such a mess

The harder that I try, I regress

I'm my own worst enemy

Right now I truly hate being me

How do I feel so mighty small

When I'm struggling to feel at all?

More like this
Cat Burns Explores A Deeply Personal Struggle In “People Pleaser”
By Catharina Cheung
“I’m Not Here To Make Friends” Speaks To A New Sam Smith Era
By Maxine Harrison
Twitter Is Saying The Same Thing About Beyoncé's Renaissance World Tour
By Shahed Ezaydi
How To Buy Tickets For Beyoncé’s UK Renaissance Tour Dates
By Shahed Ezaydi
Get Even More From Bustle — Sign Up For The Newsletter
From hair trends to relationship advice, our daily newsletter has everything you need to sound like a person who’s on TikTok, even if you aren’t.