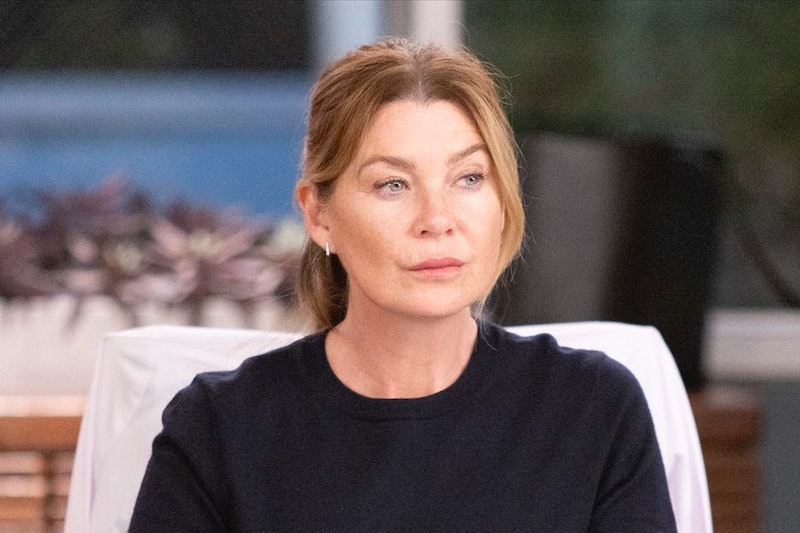 Spoilers ahead for Grey’s Anatomy Season 19, Episode 2. The second Grey’s Anatomy episode of Season 19 was titled “Wasn’t Expecting That” for a reason. While Zola was delivering her Pacific Northwest Scholars presentation speech about her hero, Dr. Ellis Grey, she began to sweat and stumble over her words. It soon became abundantly clear that what was happening went far beyond run-of-the-mill stage fright though — and mother knows best. “Something’s wrong,” Meredith told Nick in the audience before rushing to her daughter’s aid.

Zola had just gotten to the part of her speech where she mentioned Ellis’ early-onset Alzheimer's disease diagnosis. “It’s genetic, which means…” she trailed off. “It means my mom and my aunt will get it, too. They’ll get it. They’re gonna die, and I’ll have no one.” Then, she heartbreakingly kept repeating the phrase, “They’re gonna die,” until Meredith arrived to comfort her and walk her off stage.

Though it’s not yet clear what exactly caused Zola’s breakdown, Grey’s seems to be hinting that Meredith’s impending departure may be coming sooner than viewers might think.

As fans learned before the season began airing, Ellen Pompeo, who plays Meredith, will only appear in eight episodes of Season 19. That means, following the Oct. 13 installment, Meredith only has six episodes left — until next fall. (Not to worry, Pompeo will at least continue to provide her character’s usual voiceover narration.) Though nobody has revealed exactly why Meredith will step away from Grey Sloan, showrunner Krista Vernoff might have offered the biggest hint so far.

“When you’ve got a woman who has a job that she loves, a career that she loves, a man that she loves, what is the thing that might take her out of the main storytelling?” she asked rhetorically in a recent Variety interview. “And my answer to that is: her kids. Something happens with her kids that changes the course of her plans for her life. And as a mother, I resonate with that.” If nothing else, it sure sounds like Zola’s anxiety attack could at least be the tip of the iceberg in Meredith’s reasoning for stepping away from her professional duties.

Off-screen, Pompeo, who also serves as an executive producer on the ABC medical drama, has already explained the reason why she’s taking a reduced role on Grey’s this season. In addition to starring in an untitled Hulu limited series about a Midwestern couple’s adoption gone wrong, the actor also has several other projects in development as a producer.

“I’ll be back at Grey’s for the finale, and we’ll see if we can keep it going,” she told Deadline at the D23 Expo on Sept. 9, insisting that the show “will be just fine” without her. “I’m going to always be a part of that show — I’m an exec producer on that show, I’ve spent two decades of my career on that show, it’s my heart and soul, and I’ll never truly be gone as long as that show’s on the air.”

More like this
Netflix Shut Down 'Bridgerton' S3 Rumours About A “Very Dark” Storyline
By Bustle
Shonda Rhimes Responded To The Surprise Exit Of A Day 1 'Grey's Anatomy' Figure
By Grace Wehniainen
Twitter Simply Couldn’t Cope With The ‘Happy Valley’ Finale
By Sophie McEvoy
'Happy Valley' Recreated This Moment From S1 In Its Penultimate Episode
By Sophie McEvoy
Get Even More From Bustle — Sign Up For The Newsletter
From hair trends to relationship advice, our daily newsletter has everything you need to sound like a person who’s on TikTok, even if you aren’t.