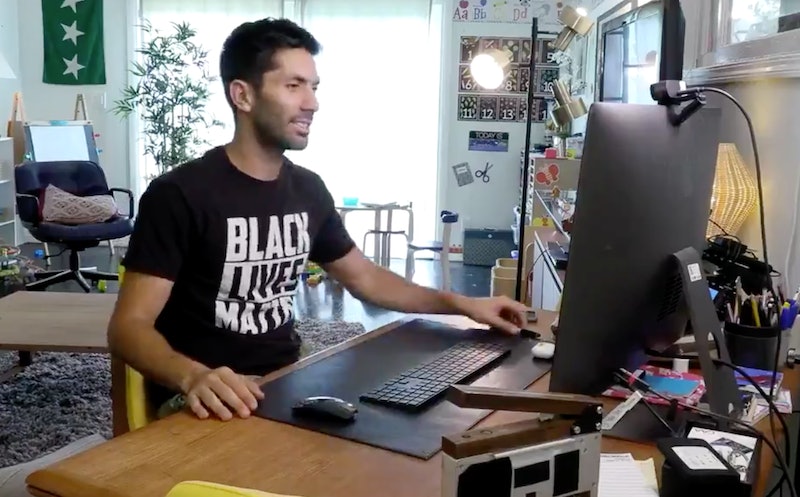 On this week's episode of Catfish, Nev and Kamie meet Dre, who admittedly likes "to read many books" — a metaphor he used to describe his taste in women. But there was just one problem, the co-hosts learned. While he was exploring an online relationship with the catfish in question, Casey, Dre had a longtime girlfriend and young daughter.

For months, Dre talked to Casey, unbeknownst to his girlfriend of seven years, Rebecca. He even went as far as to save Casey's name as a "code name" in his phone to keep the secret. But Rebecca eventually caught on, which obviously didn't bode well for Dre. Still, he was determined to solve the mystery of Casey — a random internet girl who slid into his DMs and wouldn't even talk to him on the phone.

Kamie was convinced Rebecca was posing as Casey in an effort to catch Dre cheating. But it turns out that Casey was actually Dre's sister, Jackie, who made the account with similar intentions, and Rebecca had no idea. In their final confrontation, Jackie said she simply wanted to teach Dre a lesson.

In the follow-up at the episode's end, Jackie reported better behavior from Dre, who got back with Rebecca and promised to prioritize their relationship. But a few recent Facebook updates from Rebecca suggest that things may have changed. On Aug. 18, she shared a post that read, "As a man, not having sexual discipline gone either make you lose a good woman or repeatedly run into the wrong woman."

On Aug. 17, she updated her status, tagging Dre, who goes by his rapper name Schleep Rih on social media. "If Schleep Rih stay here tonight im cutting his dreads off and bleaching his hair," she wrote. Dre replied: "Lmfaooooo I’m finna go Fred house den." Rebecca responded: "Bye." Earlier that day, she posted another status that read, "Revenge is mine said the Lord." Her Facebook relationship status says she's with Dre, whereas Dre's profile shows no relationship information at all.

More like this
We’ve Got A Text! Another 'Love Island' Series Is On The Way
By Darshita Goyal
Why Wasn't Teddi At The 'Bachelor In Paradise' Reunion?
By Brad Witter
Miriam Haart & Girlfriend Nathalie May Have Broken Up After 'My Unorthodox Life'
By Brad Witter
Robert Brotherton's Boyfriend Ra'ed Saade Competed On Several Reality Shows
By Brad Witter
Get Even More From Bustle — Sign Up For The Newsletter