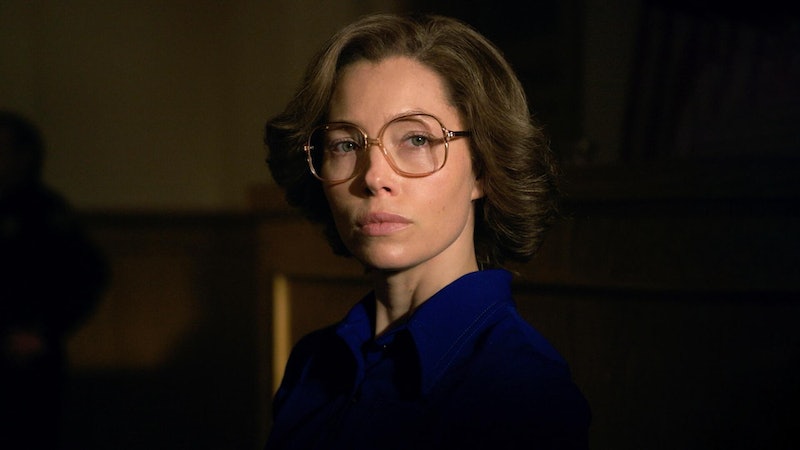 Jessica Biel is no stranger to playing complicated women. The child actor first made waves as the rebellious teen Mary Camden in 7th Heaven, and more recently, she won a Golden Globe for playing a psychologically damaged woman in The Sinner. Her latest role as Candy Montgomery, an idyllic Southern housewife who turns murderous, might be her most transformative yet. Donning a bob haircut and oversized eyeglasses, Biel leads Hulu’s Candy miniseries, which premiered on May 9 and will roll out across five consecutive nights through May 13.

Candy is based on a true story from 1980s Texas, when Montgomery’s seemingly perfect suburban life gets turned upside down after she hacked her church friend Betty Gore (played by Yellowjackets star Melanie Lynskey) to death with an ax. Forty-one times, to be exact. So, how much of the story is based on fact versus fiction? The exact details of the fictionalized adaptation remain to be seen, but Montgomery and Gore were both real people living in the Dallas-Fort Worth area in the ’80s who had met at a local church. Their families quickly became close — so close that Montgomery started a year-long affair with Gore’s husband, Allan, after a church volleyball game. Later, Allan reportedly ended the affair, leaving Montgomery feeling rejected.

Hulu released Candy’s trailer on April 13, and it’s a chilling look at Montgomery and Gore’s friendship and demise. It opens with a pregnant Gore giving a shoutout to Biel’s Montgomery for her “compassion and friendship.”

The trailer pans to clips of Montgomery’s kindness while Gore’s monologue continues. “You’re just a sweetheart,” Gore tells her friend. The trailer then cuts to Montgomery admitting she’s having an affair with Gore’s husband and later, Gore asking her what happened to their closeness. After figuring out that Gore knows, Montgomery is seen knocking on Gore’s door. The second half of the trailer is spent cutting to the crime scene and the investigation that followed the murder.

Despite the apparent motivation, it seems like the murder was not premeditated. According to a Texas Monthly article, on the day of the incident, Montgomery stopped by the Gore household to pick up a bathing suit for the Gore’s daughter, who had slept over the night before. A book written about the case, which includes exclusive interviews from both families, revealed Gore confronted Montgomery about the affair that morning while Allan was away on business. That’s where things get muddled.

Montgomery’s legal team argued that “Gore picked up an ax kept in her garage and came at Montgomery with it,” according to the Dallas Morning News, after which there was a struggle that left Gore unconscious with 41 stab wounds. While self-defense seemed plausible, experts in the trial later identified that Gore was already unconscious when many of the strikes punctured her body. To make matters worse, Montgomery allegedly cleaned herself up in the Gore family bathroom, left Gore’s 1-year-old baby alone in the home, and proceeded to go about her day. It wasn’t until Allan couldn’t reach his wife later that night did neighbors enter the home and discover Gore’s body.

Montgomery maintained her self-defense plea while admitting to the crime, bolstered by psychiatrists who testified in court that she had had a “dissociative reaction” that prompted the multiple stabbings, likely triggered by something Gore said to her in the moment. It may not seem like enough to exonerate Montgomery, but it was: The jury accepted her plea and acquitted her of murder charges in October 1980. Shortly thereafter, Montgomery left Texas and never returned.

Where Is Candy Montgomery Today?

Little is known about her whereabouts today as she keeps a relatively low profile online, though the Daily Mail reported that Montgomery and her family moved to Georgia. Her husband Pat stayed with her during the trial, but the couple is now divorced.

The now 71-year-old also reportedly goes by her maiden name, “Wheeler,” now, and works as a mental health therapist. According to her HealthGrades profile, she’s based in Dawsonville, Georgia, and practices at Creative Play Solutions LLC, a counseling company geared toward children and teens. The practice is owned by her daughter, Jennifer Montgomery Hosea, who works alongside her as a licensed counselor. According to CareDash, another medical services website, Montgomery treats people with “anger management” issues, “anxiety,” and “depression,” and also offers marriage counseling to her patients, tackling issues like infidelity, among others.

‘Candy’ trailer, coming to Hulu May 9

The story is so juicy that it has spawned multiple Hollywood retellings, another of which is in the works at HBO Max. Candy boasts producers from both the true-crime thriller The Act and the mystery crime drama The Sinner.

More like this
Betty Gore’s Daughter Honored Her After She Became A Mother Herself
By Brad Witter
Where Is Allan Gore Now? The ‘Candy’ Subject Moved On Shortly After Betty’s Death
By Gretchen Smail
Justin Timberlake’s ‘Candy’ Character Really Investigated Betty Gore’s Killing
By Brad Witter
UK Viewers Will Have To Wait To See Jessica Biel’s Killer Housewife Series
By Rachel Mantock
Get Even More From Bustle — Sign Up For The Newsletter

This article was originally published on March 18, 2022