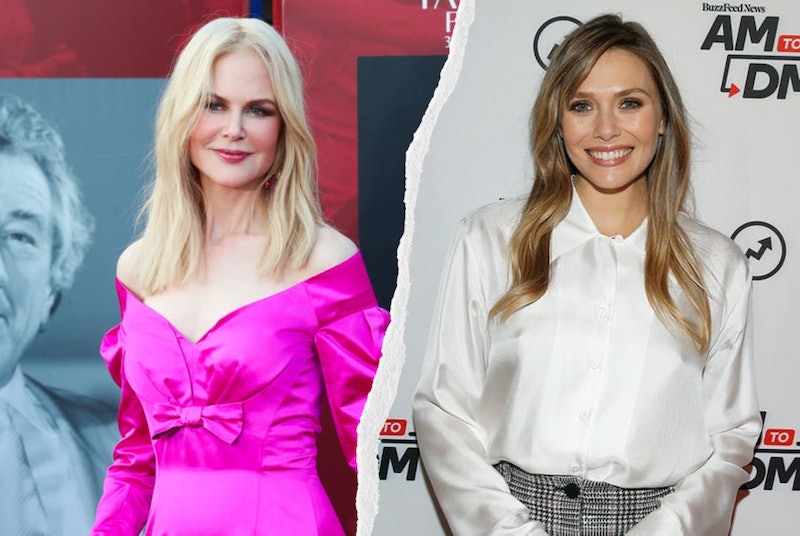 Elizabeth Olsen has captivated millions of viewers as Wanda Maximoff in several Marvel Cinematic Universe installments from Avengers: Endgame to Disney+’s limited series WandaVision, which was the most-viewed streaming series upon its release in January 2021, per TVision. After conquering the ultra-popular superhero world, the actress is preparing to take on another genre with a rabid fanbase: true crime. On May 3, HBO Max announced that Olsen is set to star in a forthcoming limited series titled Love and Death, and who better to accompany her on the project than the unofficial queen of the streaming service, Nicole Kidman? Following her roles in HBO hits Big Little Lies and The Undoing, Kidman will serve as an executive producer on the series. Here’s everything we know about Love and Death.

The Love and Death Books & Articles

Inspired by the 1984 book Evidence of Love: A True Story of Passion and Death in the Suburbs by Jim Atkinson and Joe Bob Briggs, as well as a collection of Texas Monthly articles titled “Love & Death in Silicon Prairie, Part I & II,” HBO Max’s series follows two religious couples living in a small Texas town, enjoying a simple family life. Then, someone picks up an axe — and everything changes.

Olsen stars as Candy Montgomery in the series, written by Emmy-winning Big Little Lies and Ally McBeal creator David E. Kelley and directed by Emmy and Oscar-nominated Lesli Linka Glatter, known for her work on Showtime’s Homeland. Love and Death is produced by Lionsgate with Kidman, Kelley, Glatter, Per Saari, Scott Brown, Megan Creydt, Matthew Tinker, Michael Klick, and Helen Verno attached as executive producers. The series will mark Olsen’s first non-Marvel role since starring in Facebook Watch’s critically-acclaimed drama Sorry For Your Loss, which premiered in 2018 and aired 20 episodes before its cancellation in early 2020. For her portrayal of young widow Leigh Shaw, the actress earned her first-ever Critics’ Choice Television Award nomination for Best Actress in a Drama Series.

Sarah Aubrey, HBO Max’s Head of Original Content, spoke of the series’ details in its press release. “This is a gripping story about the frustrations and desires of two women in a small town that culminates in a terrible act of violence,” she said. “We are thrilled to be partnering with David, Lesli, Nicole, and Per and incredibly fortunate to have Elizabeth at the center of our story to bring out all the layers of Candy that make this story so unforgettable.”

Kevin Beggs, Lionsgate Television Group Chairman, also commented on the series in its press release. “We cannot imagine a more perfect artist to play the leading role of Candy than Elizabeth Olsen. Her talent, charisma, and energy can bewitch audiences like no other,” he said. “We’re proud to be collaborating with a world-class creative team of Lesli, David, and Nicole on this thrilling and intriguing series and to bring another exciting premium property to our partners at HBO Max.”

On May 24, HBO Max announced Jesse Plemons (Judas and the Black Messiah and Black Mirror) would star opposite of Olsen as Allan Gore.

The premiere date for Love and Death is yet to be announced. However, if it follows suit with Lionsgate’s other HBO Max production Love Life, the series will likely take about a year to complete once it begins production, though it’s also unknown when filming will begin.

This post will be updated with the trailer, release date, and additional cast details as more information on Love and Death becomes available.