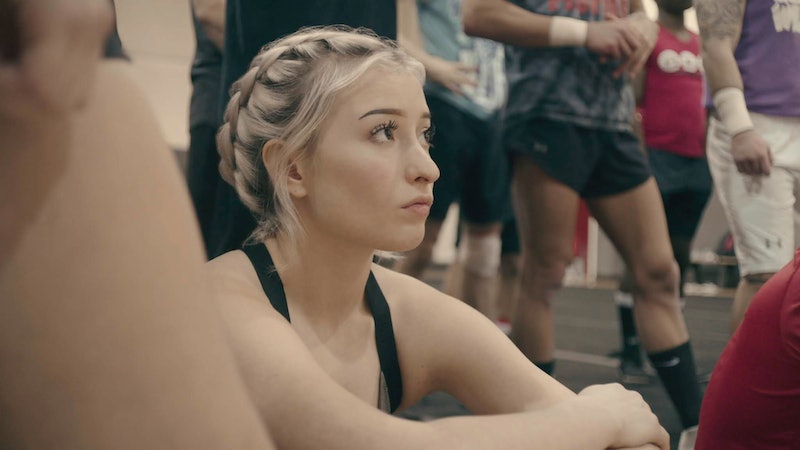 In an exciting plot twist, fans of Netflix's addictive cheerleading docuseries will be happy to know Lexi from Cheer is back with the Navarro squad — and will return for Season 2, set to premiere Jan. 12 on Netflix. Season 1 of the hit docuseries introduced viewers to Navarro College's competitive cheerleading squad in Corsicana, Texas, and quickly became a hit, leaving fans wanting more. Luckily, Lexi Brumback has made it easy to see what she's up to now, announcing her exciting news on social media shortly after Cheer Season 1 premiered.

Brumback posted an Instagram on Thursday, Jan. 16, posing with some of her then-fellow Navarro team members, including the controversial Jerry Harris, with the caption, “Honey, I’m home.” Harris, who’s since departed the team after a September 2020 arrest on child pornography charges, commented on her photo, “Soooooo happy to have you back!!” In the Season 1 finale, it was revealed that Monica Aldama kicked Brumback off the team due to illegal substances being found in her car while she was with a group of friends. Brumback returned home to Houston and stopped cheering altogether.

Despite being removed from the team, Brumback made it clear in the Season 1 finale that she and Aldama remained on good terms. Aldama even noted in the last episode that she's kicked people off the team before, but she doesn't "ever just shut the door and tell them I’m done with them." And the proof is in the Instagram photo. It looks like whatever trouble Brumback might have gotten into, it's over now, and she's back on the team where she belongs.

Speaking to HuffPost for a January 2020 interview, Aldama detailed her decision to welcome Brumback back to the team. “Her charges were dismissed for what she was pulled over for. Her coach reached back out to me, and her mom and her grandmother really wanted her back here to have the structure that she had,” Aldama said. “I felt like she had an opportunity to learn from it and it was time to give her a second chance. I even said at the end of the series that I really felt like she still needed to be here and I still wanted to be involved with her.”

Elsewhere in the story, Brumback revealed she enrolled in Blinn College for the fall 2019 semester and tried cheering for the school’s team, but it didn’t work out. “I just didn’t click with the rest of the people there like I did here at Navarro. It didn’t feel like home,” she explained. “I’m just really thankful that [Aldama] does believe in second chances and didn’t let my decisions in the past define me, and let me prove myself to be my full potential.”

Based on Brumback's Instagram, which currently holds over 719,000 followers, she officially started getting back into the cheer game on Jan. 10, 2020. Next to an impressive video of her tumbling, Brumback revealed she hadn't tumbled since October 2019, but now it's "comeback szn [season]." She’s since remained quite active on her account, sharing photos from cheer practices and raves, as well as sponsored posts for brands including Ulta Beauty, Smile Direct Club, and Rihanna’s Savage X Fenty. In the wake of her Cheer fame, Brumback launched two separate Instagram pages for her artwork and HEXXBYLEXX merch line, as well as a YouTube channel and tumbling tutorial program called Cheer Fit.

Brumback has also been in a happy relationship with Dominic Green for over two years. In November 2020, she shared photos of the couple alongside a heartfelt caption celebrating Trans Awareness Week. “I’d like to dedicate this post to my bf @lolhidominic for being such a positive light for his community and constantly showing the world how powerful + meaningful it is to be trans,” she wrote. “I admire you for the way you open so many minds and inspire those around you.”

In a story commemorating the one-year anniversary of Cheer, Brumback spoke to The Dallas Morning News about her previous decisions. “All of the mistakes that I made in the past helped me be in this mindset that I have today,” she told the publication. “I look at all possibilities of everything before I make my decision because I used to struggle with that.” She also detailed her post-Navarro plans, which include pursuing sculpture, jewelry-making, and animation full-time, a natural next step for the art major: “I want to be the girl who can do it all, [and] if I set my ambitions high, I’ll land somewhere pretty high.”

Despite getting kicked off Navarro, it looks like Brumback is doing better than ever right now. Fans can expect to learn even more about her progress when Season 2 hits Netflix on Jan. 12 — the day after Brumback’s birthday, per a recent Instagram post.