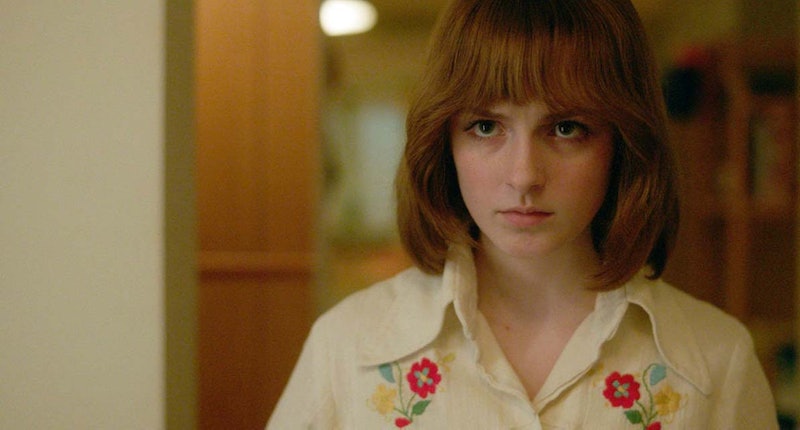 Based on the harrowing true story of Jan Broberg’s multiple kidnappings as a child, Peacock’s A Friend of the Family gives a dramatized version of the unfathomable events. In the 1970s, a Broberg family “friend” named Bob “B” Berchtold (played by Jake Lacy) abducted Broberg (Mckenna Grace and Hendrix Yancey) twice, first at age 12, and again at 14. Berchtold had used sophisticated tactics to exploit the Brobergs’ vulnerabilities and drive the family apart.

Berchtold, the Idaho family’s neighbor and friend of two-plus years, first took Broberg away in a motorhome in October 1974. “All of the brainwashing, the seeds, had been planted prior to waking up in the back of that motorhome, strapped to the bed, with an ivory box playing in my ear in a high-pitched monotone voice that I had been kidnapped by a UFO and was to do everything they told me, and if I didn't, I would be instantly vaporized,” Broberg told ABC News in 2004.

From there, he took her to Mexico, where Broberg said that he brainwashed her for about five weeks and convinced her to have sex with him to save her family. Mexican police eventually found them, and, once back in the United States, Berchtold was briefly jailed. Her parents, Bob Broberg (Colin Hanks) and Mary Ann Broberg (Anna Paquin) — who were both also groomed by and had sexual encounters with Berchtold — never pressed sexual abuse charges, since she “didn’t tell anyone what was happening” to her. (Berchtold, for his part, countered to ABC News that his relationship with the young girl was not sexual and that he never tried to brainwash her.)

Two years later, Broberg says Berchtold convinced her to leave with him again, and he hid her at a Catholic girls school in Pasadena, California, until the FBI eventually rescued her. At the time, he was sent to a mental health facility, though he claimed he was just helping Broberg escape an unhappy home.

In adulthood, Broberg went on to have an acting career, appearing in 32 episodes of The WB’s Everwood between 2002 and 2006, among several other roles. Most recently, she also played a lawyer in another 2022 true-crime drama, Lifetime’s The Gabby Petito Story. Broberg’s story was also revisited in Netflix’s 2019 documentary, Abducted in Plain Sight, following which she and her family experienced unexpected criticism from the public.

“I’m definitely more prepared this time, because I was completely blindsided at that point,” Broberg, who served as a producer on A Friend of the Family, explained to Variety in a recent interview. “We know if people start talking about things that actually matter like this, it will make a difference. So whether they are talking smack about my parents, they’re talking. Whether they’re talking about, ‘That dumb Jan Broberg, how stupid could she be to think she was kidnapped by aliens?’ I don’t care anymore. I want them to talk because, to me, that moves the needle closer to prevention, closer to awareness and closer to what I hope to stand for, which is hope that you can heal from trauma.”

Now 60 years old, Broberg released a new book, The Jan Broberg Story, on Oct. 4, thanking Paquin and Grace on Twitter for writing “beautiful reviews featured on the back cover.” Just less than a month earlier, she also dropped a new podcast called The Jan Broberg Show. “I’m so excited to share this with you all,” she tweeted.

Despite her many projects, Broberg, who has a son named Austen, credits advocacy work as her life’s main focus, and she hopes the Peacock series will help make “a difference in the lives of children all across the world.”