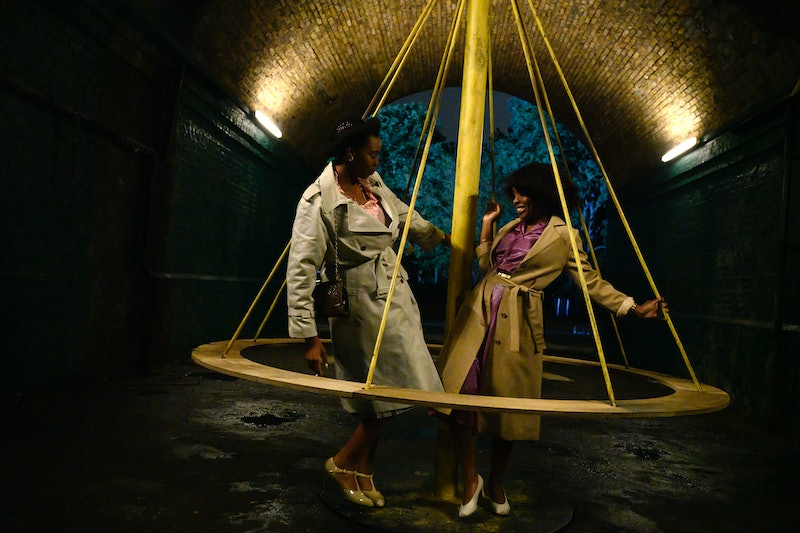 Lovers Rock, the second film in Steve McQueen’s highly anticipated anthology, Small Axe, is an ode to the romantic reggae genre of the same name, and to the Black youth who found freedom in its sound at London house parties at a time when they were unwelcome in white nightclubs. It's only appropriate, then, that the setting fits the mood. So, where is Lovers Rock filmed?

The house party itself is set in Ladbroke Grove, in West London, interwoven between scenes in Ealing and Notting Hill. But the ambiguous nature of the location of the house party is part of the mood that runs through the heart of the film.

“Lovers Rock was less about a place and more about creating a frisson between people and the detail of what they were feeling and doing,” says production designer, Helen Scott. “Creating atmosphere was much more important than the party house and its walls, the accuracy of which felt less important as what we were creating was the bubble of a world, a fairytale story.”

While the sensuality and rhythm of Sister Sledge’s “He’s The Greatest Dancer” and Janet Kay’s “Silly Games” along with the smoke and dancing, “established the space more than anything,” certain set details were integral to establishing a sense of time and place, right down to the plastic-covered couches.

“My own memories of Blues parties during that time, along with Steve's experience and that of our researcher, added invaluable detail. We also had access to ample research and archive material and the music of the time is rich in cultural references,” adds Scott.

“I loved how [Helen] recreated a Blues party, the humongous speakers in someone’s living room,” says McQueen. “These living rooms, where people watched TV or hung out with family, would all of a sudden be transformed into nightclubs. And Helen designed the set with incredible authenticity and precision.”

The most challenging part of the film, however, was creating an accurate journey between Ealing and the party in Notting Hill, says Scott. But an old-fashioned bus for Amarah-Jae St. Aubyn (Martha) and co-star Shaniqua Okwok’s (Patty) journey did just the job. “It was very fun being on there with Shaniqua because it immediately brought you to that time and gave you that kind of feel,” says St. Aubyn.

More like this
Everything To Know About The 'Daisy Jones & The Six' TV Series
By Maxine Harrison and Brad Witter
The Song At The End Of 'The Last Of Us' Ep 1 Has A Deeper Meaning
By Sophie McEvoy
'Brookside' Is Coming Back & Soap Opera Fans Are Going Wild
By Sam Ramsden
These 5 Words In 'The Last Of Us' Ep 2 Have A *Major* Impact In The Future
By Sophie McEvoy
Get The Very Best Of Bustle/UK
Sign up for Bustle UK's twice-weekly newsletter, featuring the latest must-watch TV, moving personal stories, and expert advice on the hottest viral buys.