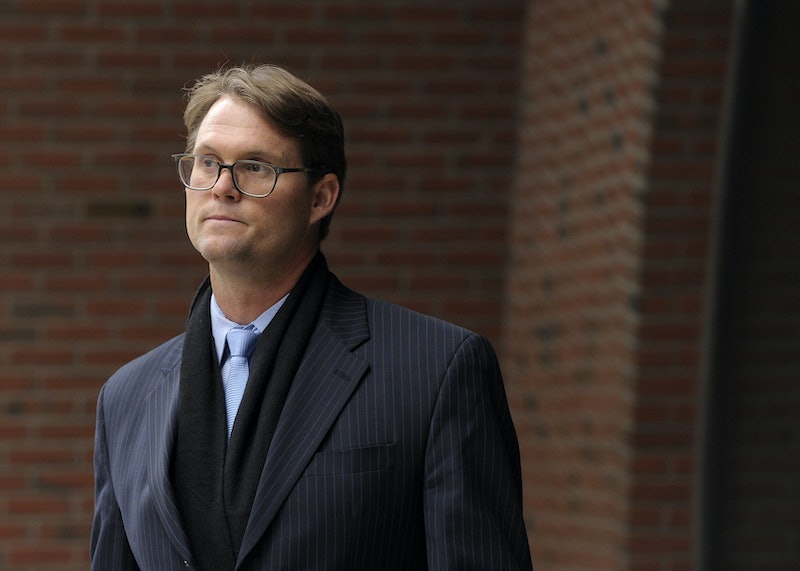 In 2019, a scandal was born when it came to light that actresses Lori Loughlin and Felicity Huffman, along with CEOs, senior executives, and numerous other wealthy parents, had paid to fix their children’s test scores and secure admission to elite colleges. Netflix’s Operation Varsity Blues, a documentary premiering March 17, takes a deep look at the investigation and its key players, including SAT and ACT tutor Mark Riddell. Now, two years since the scandal first made headlines — and after numerous postponed hearings — it’s worth asking: where is Mark Riddell now?

Riddell’s involvement in the scandal mostly centered around his job as a test tutor. The scandal’s ringleader, William “Rick” Singer, paid him and others to help his clients’ children cheat on SAT and ACT tests — which Riddell did by pretending to proctor their exams, then changing students’ answers after they’d finished. According to the Boston Herald-Tribune, prosecutors said that Singer paid Riddell $10,000 for each edited test.

Riddell was “just a really smart guy,” prosecutors said, who could produce near-perfect scores on demand. “He didn't have inside information about the answers,” said Andrew Lelling, the U.S. attorney for Massachusetts, per the BBC. “He was just smart enough to get a near perfect score on demand or to calibrate the score.”

According to CBS News, Riddell was once listed as the director of college entrance exam preparation on the website of IMG Academy, a sports-oriented private school in Bradenton, Florida; after news of the scandal broke, the page was taken down.

Since news of the scandal first broke, Riddell has been out of the spotlight, for the most part. He has cooperated with the government’s investigation, according to an AP report from last year, and he could be called on to testify as a witness in the numerous other cases involved.

Riddell himself, however, has yet to be sentenced for his part in the scandal. According to court documents from the Massachusetts District Attorney, Riddell pled guilty to all charges — conspiracy to commit mail fraud and honest services mail fraud, and conspiracy to commit money laundering — in April 2019. “I want to communicate to everyone that I am profoundly sorry for the damage I have done and grief I have caused those as a result of my needless actions,” he said in a statement at the time. “I understand how my actions contributed to a loss of trust in the college admissions process.”

Since then, Riddell’s sentencing hearing has been postponed multiple times. At the time of this writing, Riddell is scheduled to appear in court on April 15 for full sentencing. The documents also show that the state is seeking a punishment on the lower end of the prescribed punishment, which could be anywhere from 33 to 41 months in prison, according to the Florida Times-Union report on Riddell.

Meanwhile, Singer also awaits sentencing for the charges against him: “Racketeering conspiracy; money laundering conspiracy; conspiracy to defraud US; obstruction of justice,” according to the Massachusetts D.A. office. But the D.A. is recommending his prison sentence be on the low end of the prescribed guidelines, presumably due to his guilty plea and his continued assistance with the government for the investigation. Singer pled guilty in March 2019.