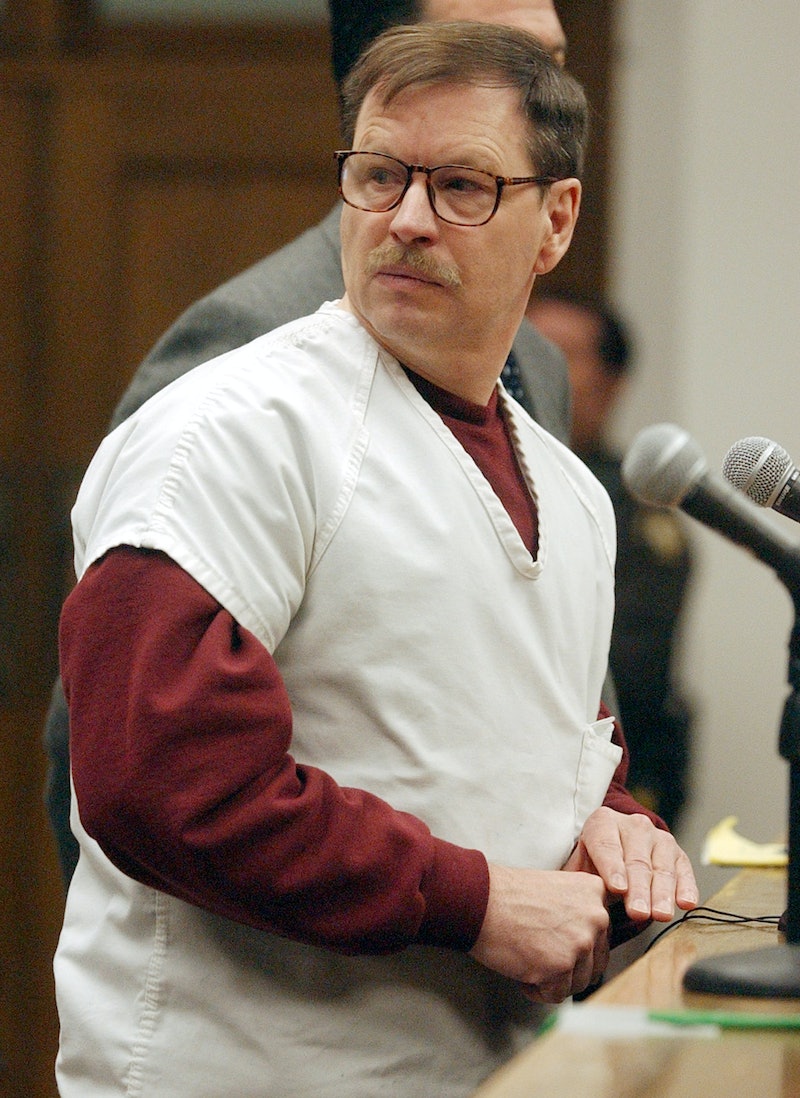 Netflix’s new true crime docuseries Catching Killers revisits the cases of some of the most infamous serial killers through the perspective of the investigators who caught them. Among those featured is Gary Leon Ridgway, aka the Green River Killer, who was convicted in 2003 of murdering at least 49 women in Washington state in the early 1980s.

Per the Tacoma News Tribune, Ridgway was born in Salt Lake City, Utah in 1949 as the second of three brothers. When he was 11, his family moved to SeaTac, Washington. Former neighbors and classmates noted that Ridgway’s parents were unusually strict and claimed to have heard them verbally and physically abusing their kids. (Ridgway later denied the abuse, per Seattle Weekly.) Though he struggled academically in high school, Ridgway’s peers claimed he was well-liked. Still, there were early signs of sociopathy: per A&E True Crime, as a teen he committed arson, tortured animals, and stabbed a young boy because he said he wanted to “know what it felt like to kill somebody,” according to the victim’s later testimony.

In 1969, Ridgway enlisted in the U.S. Navy and began hiring sex workers while stationed in the Philippines, per Tacoma News Tribune. He got married in 1970, but the relationship ended after a year. He wed again in 1973 and had a son, but that marriage ended in 1980 after his second wife sought a restraining order against him. Ridgway eventually left the Navy and became a painter at Kenworth Trucks, where he had perfect attendance for over 30 years. He got married a third time in 1987, and for a while his wife couldn’t believe her husband could ever be a killer. "He was always happy, he had a smile that would never change. He made me feel like a newlywed everyday," she once told ABC News' Seattle station KOMO-TV.

However, Ridgway admitted to prosecutors that he had fantasized about killing his mother, wives, and even his son, but never did it because he could have been easily caught. His former girlfriends also claimed to Seattle Weekly that he was obsessed with sex. That — combined with his harsh upbringing and a fanatical religious period he went through — led them to believe he had motives to hurt women.

Per The Los Angeles Times, prosecutors surmised that Ridgway may have started killing sex workers as early as the 1970s, and his spree continued until at least 1998. He eluded capture for decades in large part because he was so methodical. Per The Washington Post, he kept no incriminating trophies of his kills, always wore gloves, clipped the victim’s nails, left misleading clues, and would even acid burn his own body if a victim managed to scratch him.

Ridgway’s first victim was found in July 1982 by Washington’s Green River, according to the Tacoma News Tribune. Per The Seattle Times, four more bodies washed up August 1982, leading to the creation of a task force to catch the newly dubbed “Green River Killer.” Ridgway became a suspect in April 1983 after the family of Marie Malvar claimed that she got into Ridgway’s truck before her disappearance. But at the time, he denied any contact with Malvar and even passed a polygraph test when asked about the women’s deaths. (After his 2001 arrest, he told investigators where to find Malvar’s remains.)

As the victim count rose, Ridgway remained on the detective’s watch list. In 1987, they searched his home and vehicles after it was discovered that he was the last person seen with at least two victims. They took a saliva sample from him, but the evidence didn’t prove useful until March 2001, when a new DNA testing method allowed detectives to link the sample to the semen found on several victims, per AP News.

Detectives arrested Ridgway on Nov. 30, 2001. On Dec. 5, he was charged with four counts of aggravated first-degree murder. Two years later, Ridgway appeared in a King County courtroom filled with his victims’ families and pleaded guilty to 48 murders — more than any serial killer at the time. “I do not have a good memory of their faces. I killed so many women, I have a hard time keeping them straight,” he said in a statement. “I picked prostitutes as my victims because I hate most prostitutes and I did not want to pay them for sex.”

In exchange for pleading guilty and cooperating with police to find the other victims, Ridgway was spared the death penalty. He was sentenced to 48 life sentences and fined $480,000 — $10,000 for each victim. That count has only continued to rise. In 2011, Ridgway pled guilty to a 49th murder, and on Jan. 25, 2021, genetic genealogy identified one of the 49 women. Now 71, Ridgway will spend the rest of his life in Washington State Penitentiary.