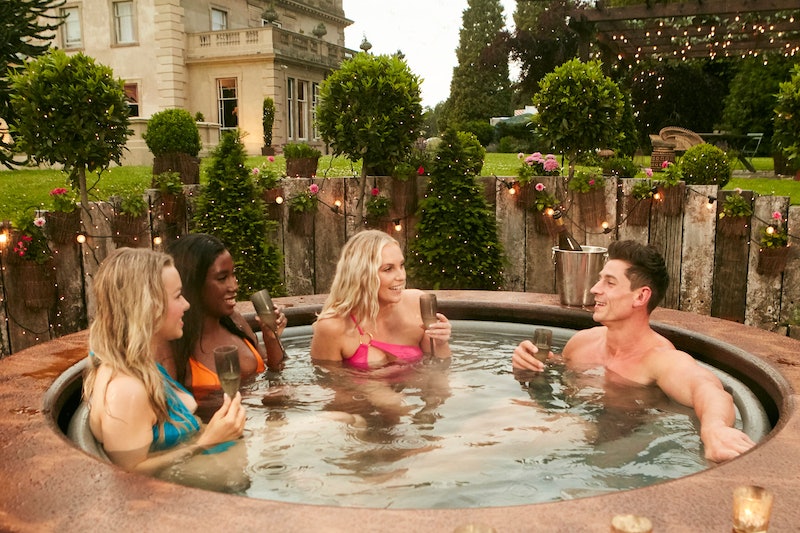 Channel 4’s latest dating show is here to raise the romance game to new heights – or new lows, depending on who you ask. The Love Trap is really a mix of reality TV and a gaming show in which contestants attempt to avoid elimination at the end of each episode when one suspected “love trap” is dumped, quite literally, through a trapdoor.

Hosted by comedian and presenter Joel Dommett, The Love Trap will see twelve women vying to do all they can over a series of dates to win the affection of one eligible bachelor, David Birtwistle, who fans may recognise from Netflix's Too Hot To Handle. Sounds fairly smooth sailing so far. The twist? Only half of the women are in it to win the bachelor’s heart. The other half are in the game for a chance to win a big cash prize, and Birtwistle will have to figure out – through a series of dates – which of the girls are genuine, and which ones are just in it for the money.

The new series started on October 20, and will continue for seven hour-long episodes as Birtwistle gets to know the women in the beautiful mansion where the show is filmed. And there are certainly worse places to be. Channel 4 confirmed to Bustle that the location for filming the latest dating show was West-Midlands mansion, The Location House, a 19th Century Grade II-listed manor house, based in the village of Knowle.

Though “available to hire for stills photography, TV, or film shoots,” you cannot book out the mansion house for yourself, sadly.

Per the Location House’s website, the impressive manor was originally built in 1850, but has been lovingly restored since 2015 to turn it into the family home of Sarah and Anthony Ellis and their children. Of course, 6,000 square foot of living space, Versaille parquet flooring, traditional cast iron radiators, ornate ceiling plasterwork, ceiling paintings, antique lighting, original wood flooring, and roll-top bathtubs, makes it the ideal backdrop for all the romantic shenanigans The Love Trap has to offer.

And as for the trap doors... Yes, they are “definitely real” according to a comment posted on their IG by the Location House’s owners.

More like this
You’ve Got 'Love Island’s Farmer Will All Wrong
By Jack Orenstein
This Pre-'Love Island' Video Of Olivia & Zara Together Changes Everything
By Bustle UK
Is Winter 'Love Island' Flying Too Close To The Sun?
By Jason Okundaye
Twitter Can’t Make Up Its Mind About Ekin-Su’s 'Dancing On Ice' Skate-Off
By Sophie McEvoy
Get The Very Best Of Bustle/UK
Sign up for Bustle UK's twice-weekly newsletter, featuring the latest must-watch TV, moving personal stories, and expert advice on the hottest viral buys.