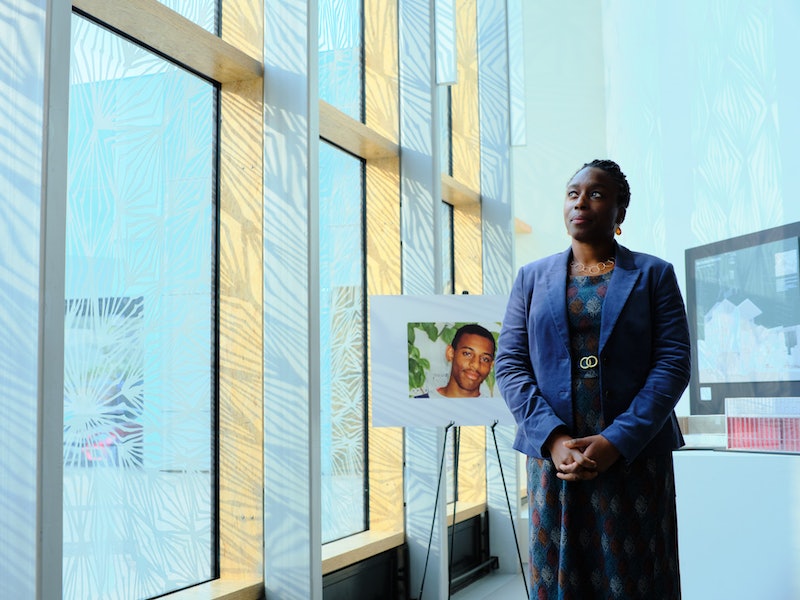 Starring Sharlene Whyte, Steve Coogan and Hugh Quarshie, Stephen, a three-part sequel to the drama, The Murder of Stephen Lawrence, is due to air on ITV on August 30. Stephen takes place thirteen years after Stephen was murdered in a racist attack in 1993 whilst waiting for a bus. The harrowing drama follows the real-life events of Doreen and Neville Lawrence’s enduring fight for justice, and how it took more than 18 years before Gary Dobson and David Norris were convicted of his murder in 2012.

Unveiled in 2007, the Stephen Lawrence Centre and memorial is located in Brookmill Road, Lewisham, and is made up of meeting rooms, classrooms, IT labs, offices and exhibition spaces. As the Lewisham Council website states, the centre regularly holds events that are open to the public.

As seen in the drama, the modern centre was built in the memory of Stephen Lawrence, who was a budding 18-year-old architecture student at the time of his murder. Developed by Adjaye Associates, the centre is dedicated to improving opportunities for young Black people in South London.

“It offers services to the general population of the Lewisham area but has a unique contribution to make in relation to improving the life chances of black Caribbean and African young people,” reads the website.

Explaining in more detail the design of the building, the website states, “The site has a small river to the east and a neighbourhood park to the south. It is located between two types of housing: traditional terraced houses to the west and a line of higher apartment buildings to the east. The form and materiality of the Centre attempts to reconcile these contrasting conditions within a single development.”

Following her son’s death, Lawrence has worked tirelessly to represent communities whose voices may not always have been heard or acknowledged.

As the ITV drama details, due to corruption, prejudice and other failings within the Metropolitan Police, it took 18 years for Stephen’s killers to finally be brought to justice. The Lawrence’s family’s fight for justice led to a public inquiry in 1998, which brought about fundamental changes to UK law. During this time, Doreen was awarded an OBE for her advocacy and in 2013 she became Baroness Lawrence, sitting on the Labour benches in the House of Lords as a working peer.