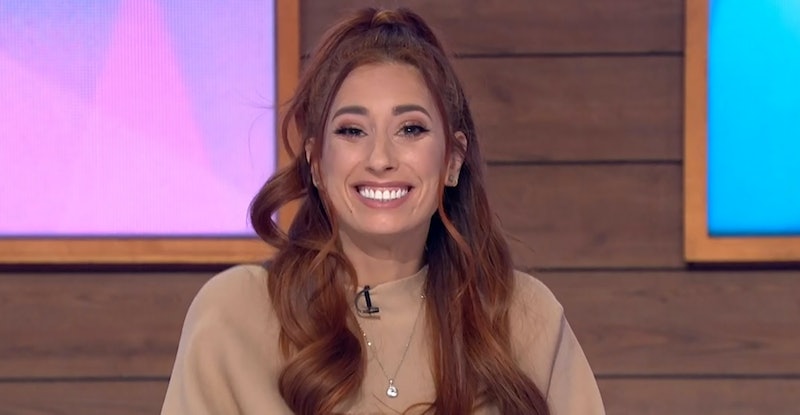 It seems social media has produced yet another home cleaning superstar a la Mrs Hinch. Stacey Solomon's book Tap To Tidy is a new guide for tidying enthusiasts. The Loose Women presenter regularly posts cleaning and organisational hacks to her Instagram page and invites her followers to watch her tidy her home. Her satisfying 'Tap To Tidy' feature sees the mum-of-three magically transform her messes with just a click of the finger (if only it were that easy).

Solomon announced the book, entitled Tap to Tidy: Organising, Crafting & Creating Happiness in a Messy World, on her Instagram page, which has 3.9 million devoted followers. Due to be released on March 2021, you can pre-order the book on Amazon.

Solomon has often described her organisational and crafting skills as a source of calm and meditation and it appears many people feel the same. "When I started doing Tap to Tidy on Instagram, I had no idea people would enjoy the satisfaction of seeing a huge mess turn into something liveable as much as I do! " she explained in the book's press release. "And I’m so grateful, because, quite frankly, it’s the only content I’ve got most of the time," she added.

The loveable presenter, who recently became engaged to actor Joe Swash, admitted that she was a little nervous about her book launch.

Taking to Instagram, she wrote: "Honestly I’ve never been so nervous. Thanks to your kindness, support, love, and encouragement, I was given the chance to write a book and I said yes. And yesterday this came through the door and my stomach has been doing summersaults ever since.

"I can hand on my heart say I’ve thought so much for so long about every word, drawing, diagram, craft, snack, tap to tidy and playlist in it, from cover to cover. It’s taken over my life for the last year,' she added. "You all told me to go for it and so I did..."

Solomon describes Tap To Tidy as a "dream come true" and hopes to make her followers proud.

Ahead of the book's release, here's five interesting things about Tap To Tidy you may not know yet.

1. Tap To Tidy Is About More Than Cleaning

Readers of Solomon's book will of course find some helpful tidying and organisation tips, but Tap To Tidy will also include some advice about crafting projects and snack recipes too.

2. It's Already An Amazon Best Seller

Tap To Tidy has even been published yet and it's already an Amazon best seller – now that's saying something.

Everyone knows that one way to make cleaning enjoyable is to blast some on major tunes. To help, Tap To Tidy contains a QR code to scan and download a playlist of all of Stacey's favourite songs to craft to, including classic singalong hits from Destiny's Child to Christina Milian.

4. There's Some S/Os To Small Businesses

Solomon has loudly supported independent businesses in the past and, true to form, the presenter will share some of her favourite small businesses across home, kids, clothing, jewellery, food and crafts in the book.

Solomon is very good friends with cleaning megastar Mrs Hinch, who's achieved huge success with her own cleaning tips and tricks on Instagram.

Following the announcement, Mrs Hinch congratulated Stacey on Instagram. "YESSSSS!! I've been excited for this," she wrote. "So VERY VERY proud of you beautiful!! I can't wait to read abs make Ron one of your delicious snacks! You've got this, we are all so proud of you! Love you lots xxxxx."

Here's when can you purchase the book

Tap to Tidy: Organising, Crafting & Creating Happiness in a Messy World is due to be released on March 4, 2021 on Amazon but eager-beavers can pre-order the book now.