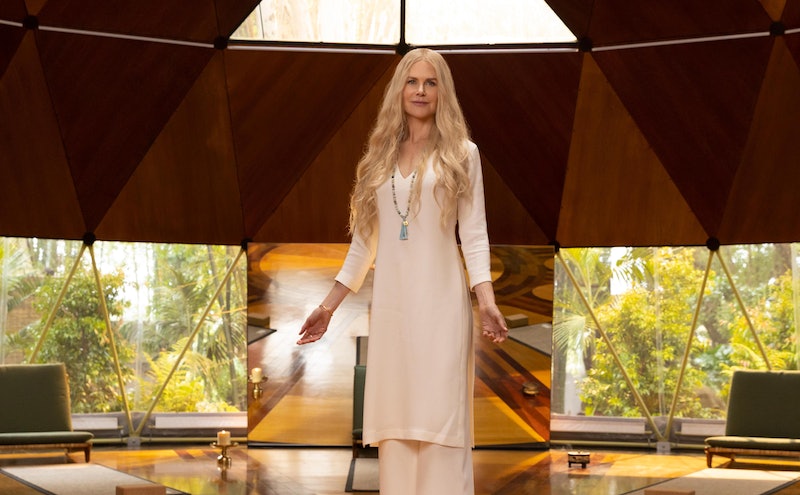 America’s obsession with wellness culture takes center stage in Nine Perfect Strangers. Based on Liane Moriarty’s novel of the same name, the Hulu series takes place at Tranquillum House, a secluded health and wellness resort that promises a total transformation in 10 days for nine dysfunctional guests. The resort is run by Masha (Nicole Kidman), a Russian woman with a mysterious past whose dubious healing methods are helped along by her staffers Yao (Manny Jacinto) and Delilah (Tiffany Boone).

Though a sign in the premiere episode says that Masha’s resort is somewhere in the woods of Cabrillo, California, Nine Perfect Strangers was filmed very far from the golden state. As producer Bruna Papandrea explained to Financial Review, they were fully prepared to start shooting in Los Angeles around March 2020, but then the coronavirus pandemic shut down Hollywood. They decided to move the whole production to Australia, which had relatively low infection rates and where film and TV are classified as an “essential service.” Papandrea is also Australian, as are Moriarty and Kidman. “We are deeply connected to Australia, which made it easier,” she said. “It was a very quick conversation and then, yep, we’re now shooting in Byron Bay.”

Papandrea said that all the actors were tested for coronavirus three times a week, underwent daily temperature checks, and wore masks for the 18 weeks that they filmed. “It’s an interesting thing because I worked as an independent producer [in Australia] for a really long time,” Papandrea said. “And about five years ago, I thought, ‘This is too hard, I don’t want to work from here any more. It’s just too far from everything ... Now, of course, the international projects have come here.”

Per Architectural Digest, Byron Bay is located in New South Wales, Australia. Most of the interior and exterior shots of Tranquillum House were filmed at a newly constructed wellness retreat in Byron Bay called Soma. (You can visit the retreat for a three-day program, but be forewarned that it comes with a hefty price tag of anywhere from $2,500 to $4,500 per person.) Tranquillum’s guests have their smoothie breakfasts in the central living room of Soma, and the outdoor pool is featured in a comedic scene between Tony (Bobby Cannavale) and Frances (Melissa McCarthy). The geodesic yoga dome where Masha first meets the guests is also located at Soma, but for the show they covered it in parquet flooring.

According to set designer Colin Gibson, the production needed a second filming location for more space. After Googling around, they found Lune de Sang, a former dairy property turned architectural project that combines concrete structures with a sustainable rainforest ecosystem. Nine Perfect Strangers features the project’s latest component, the Pavilion, a suite of five communal buildings that includes two working sheds, a guesthouse, and a general manager’s residence. The buildings are all owned by glass artist Andy Plummer and his wife, and the architecture was done by the Sydney-based firm Chrofi.

Masha’s private pool scenes are filmed at Lune de Sang, and it looks like some of the patient’s rooms are also set there. As set decorator Glen W. Johnson told Architectural Digest, they used a lot of the luxury furniture that was already at both locations but brought in some “classic midcentury furnishings and lush linens” to soften things up. Both locations are bordered by fig trees, so that provided some filming continuity. And Plummer’s glass work inspired a motif that carried through both sets. “We’d already decided that reflection would be a theme, given that’s really what meditation is supposed to be,” Gibson said. “Us taking a chance to reflect on our lives.”

More like this
The 'Reasonable Doubt' Cast Includes A 'Save The Last Dance' Reunion
By Grace Wehniainen
18 Principal Ava Quotes That Prove She's The Queen Of Shade On 'Abbott Elementary'
By Grace Wehniainen
On 'The Handmaid’s Tale,' Christine Ko Fights Back
By Gretchen Smail
UK Viewers Will Have To Wait To Watch The Handmaid’s Tale S5
By Maxine Harrison
Get Even More From Bustle — Sign Up For The Newsletter