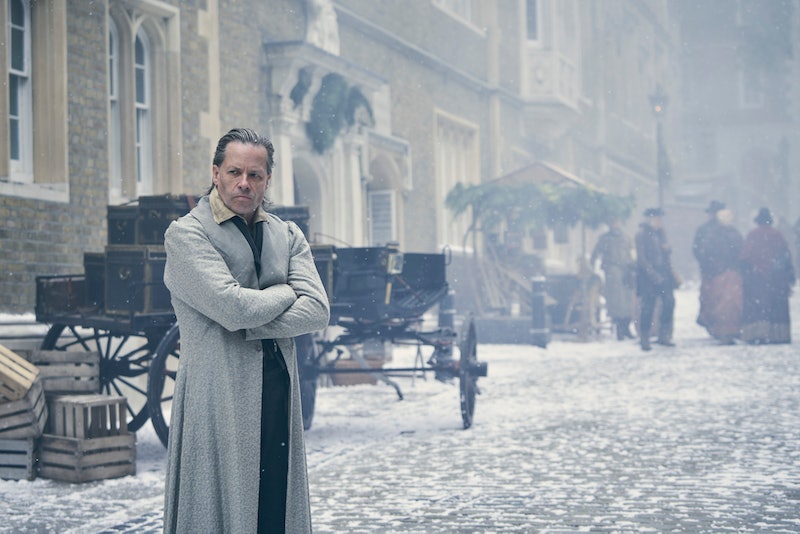 Who doesn't love some classic BBC Christmas telly? And this year is set to be a real doozy as a rendition of Charles Dickens' classic A Christmas Carol is coming to BBC One. The series feels incredibly realistic, with costumes and settings that transport us back to Victorian England. So, the question is, where was A Christmas Carol filmed, and what more can we learn about the show's settings?

It looks like A Christmas Carol was filmed in multiple locations in the UK, giving it the real, authentic feel of a classic British tale. The Romford Recorder reported that there were unseasonably snowy scenes in Rainham Hall back in May when it was made look super Christmassy during filming. Elsewhere, Birmingham Live reported that filming took place in Warwickshire. And, according to Ham & High, locals in the London neighbourhood of Hampstead were surprised to see snow on the ground during an especially warm early summer weekend last year.

Ham & High also gave a few clues as to certain set design elements that are sure to add even more character to the impressive-sounding shooting location:

"The production saw Hampstead Parish Church have its sign outside changed to that of 'Saint Giles Church of Bishopgate.' Fake snow also gathered around a 'Cattle Prohibited' sign in the road outside."

The locations for this three-part series are key, as they will of course set the stage for a Christmas ghost story that's bee subject to countless re-interpretations since it was first written back in 1843.

Alongside the beautiful locations, the cast in this chilly (and chilling) production are going to make your Christmas viewing a whole lot more Hollywood than usual. Ebenezer Scrooge is being played by Australian acting legend Guy Pearce, Stephen Graham will be his deceased colleague Jacob Marley, and Bob Cratchit will be played by Joe Alwyn. (Yes, Taylor Swift's actual boyfriend will be pulling at your heartstrings.)

The latest adaptation is written by Stephen Knight who's also responsible for the thrilling AF Peaky Blinders. A show which combines beautiful period scenes, as well as super thrilling storylines to get your heart racing. Which bodes well for his turn adapting this classic tale. According to the Radio Times, while speaking at the launch of Peaky Blinders season 5, Knight said:

"A Christmas Carol is done. And is in the can, and is bloody marvellous. I mean I would say that, but Guy Pearce is brilliant. Stephen Graham is brilliant, and it looks quite amazing."

If that wasn't enough, A-list star Tom Hardy is trying his luck behind the camera for A Christmas Carol, acting as one of the producers on the much-anticipated series.