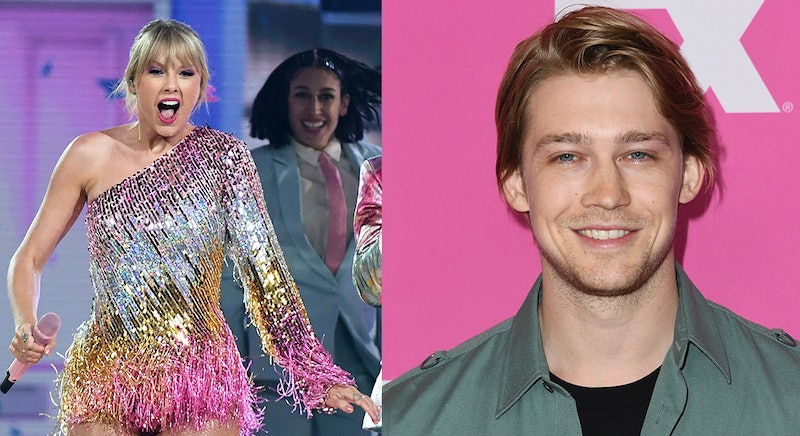 When Taylor Swift shows up to receive the first ever Teen Choice Icon Award, the real prize might be who shows up on her arm. Especially, if Swift shows up with her boyfriend Joe Alwyn, who hasn't walked too many red carpets with the pop star. Knowing this fun fact makes you wonder, how long have Swift and Alwyn been dating?

Their love story is actually pretty low-key. Swift and Alwyn reportedly met at a secret Kings of Leon concert in New York on Oct. 12, 2016. While Nancy Drew-like Swifties have dug up video evidence to confirm they were both in attendance, neither Swift nor Alwyn has ever commented. So mysterious, these two are.

It wasn't until May 2017 that The Sun officially reported that the two were an item, despite there being no photographic proof just yet. So, it might be safe to assume that Swift and Alwyn have been together for at least a little over two years. Though, it could be longer if you believe the Kings Of Leon story. Now, if you're one of her fans who think they actually met at the 2016 Met Gala than you would say they've been dating even longer since that happened in May. Seriously, Jaylor (Toe?) give us some answers, please and thank you.

For now, fans have to go off insiders like the one who told The Sun that Swift did her best to hide her first London encounters with Alwyn from the public eye. According to The Sun's source, Swift had "been walking around with Joe in London using disguises, like scarves and hats, to keep her identity under wraps."

By late 2017, the couple were spotted out in the world together sans disguises. First, it was the paparazzi catching them hanging out on Swift's Nashville balcony. Then Alwyn showed up to a few reputation tour dates with his family, according to E!. While Swift skipped the 2019 Grammys to attend the BAFTAs with her beau, sharing an Instagram congratulating his movie The Favourite for winning big.

Swift and Alwyn have yet to officially make their red carpet debut, instead choosing to show up to the 2019 Golden Globes separately. But, Alwyn has already popped up in Swift's songs. According to fans, Swift confirmed during private listening sessions for Reputation that "Gorgeous" was about Alwyn and might actually tell their love story.

It's likely Alwyn was the inspiration for the other song on that album, too. “[I] think there was a bit of a bait-and-switch that happened with this album when we put out ‘Look What You Made Me Do’ and we’re like, ‘Guys, this album is gonna be one thing,’" Swift told a fans at a, intimate concert in 2018, per Entertainment Tonight. "And when the album came out, it’s legitimately an album about finding love throughout all the noise."

Being that Swift's new album is called Lover, it's hard to believe Alwyn won't get at least one shout out on it. Already, fans have guessed that Swift's single "The Archer" is about him. In fact, there happens to be a bar called The Archer in the east side of London. Perhaps, they got a drink there while in full disguise?

Swift probably won't ever tell, but lucky for fans, they can listen to Lover when it drops on Aug. 23 and decide for themselves.