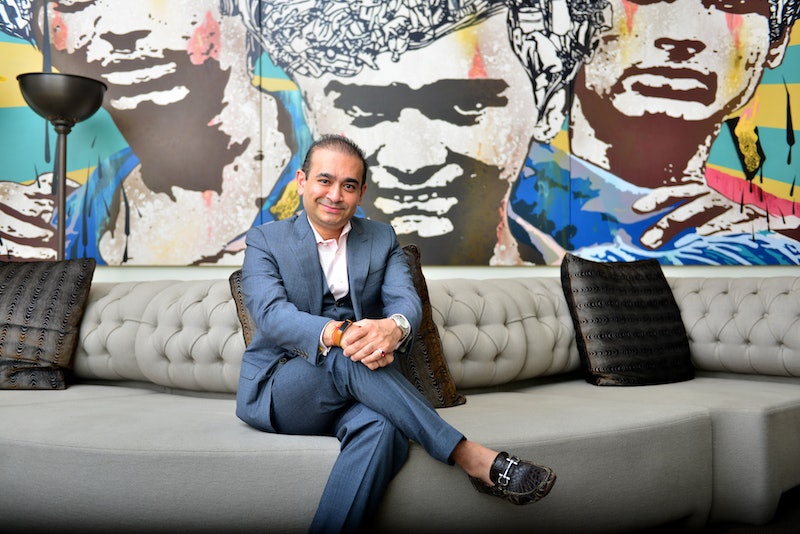 As the premiere of Netflix's Bad Boy Billionaires — a new series documenting some of India's most infamous tycoons — draws closer, the walls have been closing in one of its central subjects. Nirav Modi, a diamond mogul and Hollywood jeweler, had been living as a fugitive since 2018, when the Indian Central Bureau of Investigation began looking into his company’s allegedly fraudulent dealings with the Punjab National Bank. There were reports that he and his family were living in multi-million dollar New York digs and purported sightings in Hong Kong, but Modi was ultimately found in London, where he was arrested by local authorities in March 2019 for his suspected role in India’s biggest ever banking fraud. Now, he awaits the conclusion of his UK extradition trial, set to resume in September.

Reporters for the British newspaper The Telegraph were the first to find Modi last year, living in an £8 million, three-bedroom apartment on Oxford Street where he’d reportedly been laying low for months. Since then, he’s seen his possessions seized and sold at auction, including 55 pieces of art that raised $8 million by the Indian tax authorities. Indian authorities have so far received a further $3 million from the liquidation of Modi’s US assets. By comparison, the fraud scheme Modi stands accused of helping engineer cost India’s second largest state run bank almost $2 billion.

Since his extradition proceedings began, Modi has additionally been charged with “causing the disappearance of evidence” and the criminal intimidation of witnesses, including allegedly threatening them with death. Based on the current court schedule, which has been affected by COVID-19 shutdowns, the trial should conclude in early December with a verdict to follow.

Modi initially attempted to claim asylum in the UK as a political refugee in 2018. But his legal team is now arguing that India’s CBI has insufficient evidence to prosecute Modi for fraud or money laundering, and he therefore should be allowed to remain in the UK, where he has been held in prison for the last 17 months.