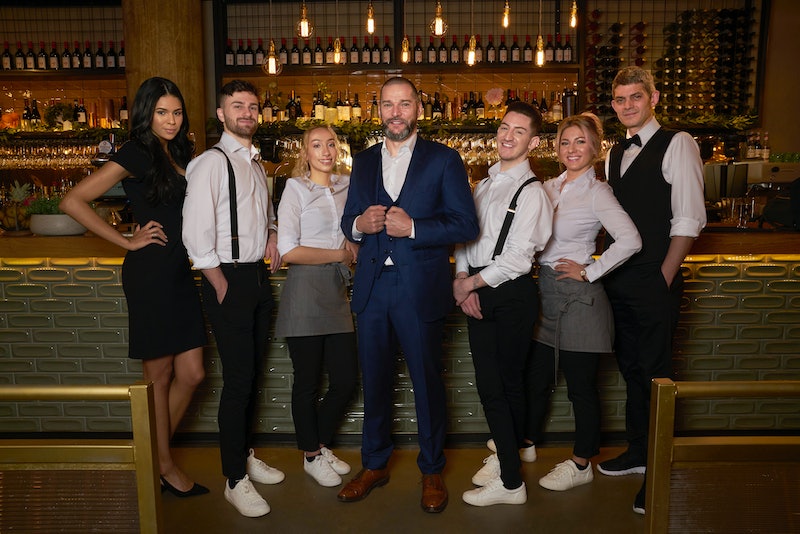 Channel 4's beloved dating show First Dates is back for another romance-filled series this week. For the first time in the show's history, maitre d' Fred Sirieux and the team have moved to a brand new location in the north, and singletons will be meeting their dinner dates in Manchester. With a new location also comes some new faces, so who is on the First Dates Manchester restaurant team?

Fred, Merlin, CiCi, and Grant are joined by David, Daniella, and Fiona who will be working in various positions in the new restaurant. The three new team members have all worked in hospitality before their First Dates gig and all are said to be very clued up on the Manchester scene.

Waitress Daniella, 25, is born and bred in the city and says diners will be "pleasantly surprised" by the new venue.

"I think, well I hope it’ll be a pleasant surprise! Apparently, people are saying Manchester’s the new London, so let’s see!" she explains.

"I would say more than anything, watch out for some amazing outfits! The guys and the girls in our restaurant have blown us away, and that’s all I'm saying," she adds.

Also new to the First Dates team is David, 28, from Liverpool, who has a background in silver service. He's also an up-and-coming fashion designer and once interned at Vera Wang in New York where he produced work for celebrity clients such as Nicki Minaj.

David aims to lift the energy to maximise the "love in the air" and thinks the new restaurant will bring a "new vibe" to the series. "A brand new restaurant and a new city — it will instantly bring a new vibe and energy, with a little bit of Northern humour thrown in," he shared.

On the new role, David said he's most excited to help daters connect.

"I also love that we can give the daters an opportunity to get away from online dating and meet face to face," he said. "I think it is so important to be present at the moment, gauge somebody's energy, and have some cheeky eye contact."

Fiona, 30, will be serving drinks to the First Dates singletons as well as collecting the gossip. She'll be working alongside show regular Merlin who'll be keeping an eye on her serving skills.

"I'm the new bartender working alongside Merlin — no pressure [haha]! " she says. "He's done a great job of training me up, however, he has very high standards as you might expect from somebody with so much experience."

The former model and advertiser says she's most excited to meet the daters and hear the stories of how they get on. "Maybe because I'm nosey, haha!" she jokes.

Between the new faces and new venue, Channel 4 is confident that the new series has the "same warm, moving and often very funny moments that viewers love about First Dates."

First Dates returns to Channel 4 on Tuesday, January 19 at 10pm

More like this
Twitter Is Saying The Same Thing About Jill Scott Winning 'I’m A Celeb'
By Sophie McEvoy
BBC’s Gladiators Reboot Is Staying Close To The Original ‘90s Phenomenon
By Sophie McEvoy
This 'Strictly' Star Is Rumoured To Be The New 'Big Brother' Host
By El Hunt, Maxine Harrison and Sam Ramsden
Meet Jungle Runner-Up Owen Warner's Equally Handsome Brothers
By Sam Ramsden
Get The Very Best Of Bustle/UK