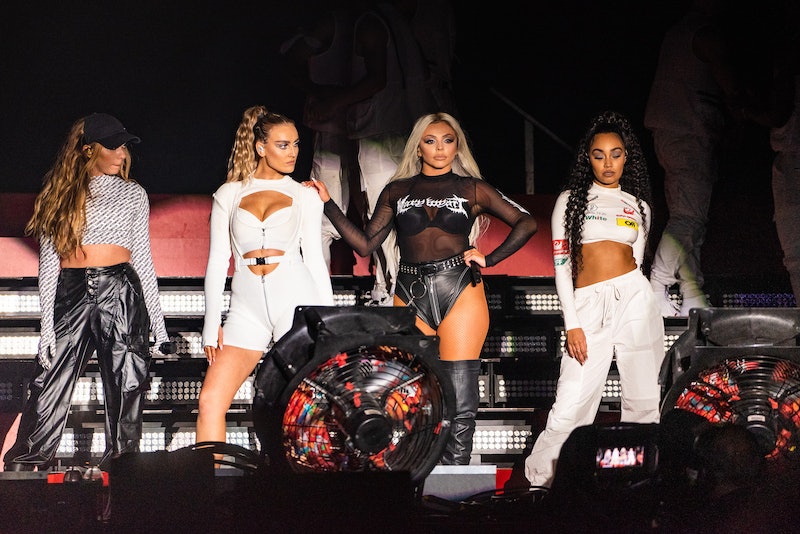 Since winning the eighth series of The X Factor back in 2011, Little Mix have gone on to take the world by storm, and become known as one of the greatest modern girl bands. The four-piece have enjoyed incredible chart success both in the UK and across the pond, and due to the nature of show business, their personal relationships often make the headlines. But who are the members of Little Mix dating?

Well, the girls' highly-publicised love lives have endured many ups and downs since they burst into the limelight nine years ago, and here’s everything you need to know about their current relationship status’.

As Capital FM reports, Perrie Edwards is currently seeing footballer Alex Oxlade-Chamberlain, who she first began dating back in 2017. Bandmate Leigh-Anne Pinnock is dating footballer Andre Gray, who she became engaged to in May 2020. Gray revealed the good news on Instagram, with a caption that read “Hasta la muerte” — which translates to “til death do us part.”

Following her break-up with Love Island’s Chris Hughes in April, Jesy Nelson has since been linked to Our Girl and The Gentlemen star Sean Sagar, and the pair were recently spotted holidaying together in Cornwall. However, as Capital FM reports, the “Woman Like Me” singer previously said Sagar is just a friend. Jade Thirlwall is also currently single after splitting from Jed Elliott of band The Struts back in 2019. The couple had dated for three years before parting ways, and Thirlwall has since been linked to Rizzle Kicks singer Jordan Stephens.

that herself and boyfriend Oxlade-Chamberlain “got carried away” listening to the new material.

As the Radio Times reports, Little Mix fans can also look forward to the group’s television debut, when the BBC’s latest talent show The Search arrives on screens later this year. Hosted by Strictly’s Chris Ramsey, the series will see the X Factor winners set out to discover the next big pop band — and after being forced to reschedule due to the coronavirus pandemic, the show is expected to begin airing in the autumn.

More like this
Nicholas Hoult Has The Sweetest Things To Say About His Family
By Sam Ramsden
Tom Sturridge & Alexa Chung Are Enjoying A Summer Of Love
By Frances Stewart
Stephen Graham’s Wife Plays A Vital Role In His Career
By Emma Madden and Sophie McEvoy
At 28, Lesley Manville Was Acting, Picketing, & Singing Kate Bush Songs
By Olivia-Anne Cleary
Get The Very Best Of Bustle/UK